One of my lasting memories growing up in the 1960s, apart from England winning the World Cup, listening to the Beatles and generally not having a care in the world, was watching TV just before teatime. BBC often showed foreign-made children's feature films made into three-part mini-series. I remember one, made in Czechoslovakia called Adventure in Golden Bay (Dobrodruzstvi na Zlaté zátoce) about a misunderstood orpan who decided to try and catch a predatory pike that was threatening the rest of the wildlife, in particular a carp that he had trained to feed from his hand. It was captivating at the time.

But there was one film in particular that, rather than being something to enjoy before mealtime in the early evening, instead gave me nightmares.

It was called the Singing Ringing Tree. A surreal fairytale, made in communist East Germany, about a prince who tries to win the heart of an arrogant, spoilt princess by bringing her a singing, ringing tree. The prince's quest isn't helped when he discovers the tree belongs to an evil dwarf, who lets the prince have the tree on the proviso the tree must sing before sundown to prove the princess loves him. If it doesn't he would be turned into a bear. Great.

Needless to say, he gets turned into a bear and the rest of the story is about the dwarf doing his best to stop the bear winning over the princess and therefore returning him back to being a prince. Sounds like a decent story for kids, but it was anything but for me as a seven-year-old who was subjected to plenty of evil laughter, fire and brimstone, waterfalls turning to ice, stricken giant fish and horses being turned to stone.

No such worries for me today, however, and like the film, I had a happy ending.

The sun was bright and the skies were clear for the first time this month. I set a personal challenge this morning, which meant if I failed to see an intended bird I wouldn't immediately turn into a Grizzly for the rest of the day (I can get the sulks for a bit). An open mind is integral to my new approach to birding. I'd used the policy a few days earlier at Staines Reservoir where I hoped to see a Roseate Tern. No Tern, but I saw a Whimbrel (141) for the first time this year on the south basin.

I had a decent amount of time available this morning so I set off at 6.30am for Thursley village in search of a Wood Warbler.

Graham Osbourne had discovered one near the village along a bridle path that leads to Thursley Common on Friday. It was still present yesterday, so there was a chance it might hang around today. Wood Warblers are extremely scarce in Surrey now. Up until a few years ago they used to be seen regularly at the Devil's Punchbowl, near Hindhead, but last year, the only sighting recorded was one at Canons Farm. That one only stayed for a day and I, naturally, dipped it.

I went to Thursley village with an open mind for once and I was rewarded for it. It didn't take too long to find the Wood Warbler (142) once I had worked out the Ordnance Survey co-ordinates. I heard it first at about 7.30am, the call ringing repeatedly around the woods. The song is often referred to as sounding like a coin spinning to a halt on a plate. This very smart warbler of the woodland stood out well.


It sang its heart out, flying from tree-to-tree and branch-to-branch – never keeping still for too long, hence the rubbish photo. That is the disadvantage of digiscoping without a jig on the scope.

Top Tice's Meadow birder, John Hunt, joined me after about half an hour and we watched this brilliant bird for another 45 minutes or so before John mentioned he was going to pop over to Frensham Little Pond to see if any Spotted Flycatchers were there.

I followed him over to the Pond. A Garden Warbler (143) sang in an oak tree, a couple of Tree Pipit flew by, a handsome male Common Redstart (144) landed on a branch directly in front of us before flying off and a Grey Wagtail dropped in on the path. A few minutes later John picked up a Spotted Flycatcher (145) near the warden's lodge. It was soon followed by another. 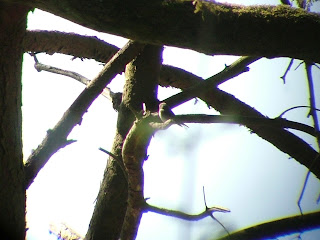 An excellent morning so far, with four new birds for the year. I asked John if he knew where to look for Lesser Spotted Woodpecker down the road at Tilford, and he very obligingly took me there. It was only a few minutes away – West Surrey has some really good birding sites in close proximity to one another compared to East Surrey.

There was also a possibility to see a Firecrest (remember them), but nothing showed while I was there, and neither did a Lesser Pecker down by the river. Great habitat for them, though. I did see two more Spotted Flycatchers – one of which flew into a tree directly above my head.

From Tilford I headed home via Bookham Common. Here I saw a couple of Nightingales, one was perched high up on a bush but dropped back down into the dense scrub before I could get a photo. I recorded one of them and its remarkable repertoire deep in the trees. Fantastic.


After that it was to the local farm shop in Nutfield for Sunday provisions and then driving towards Redhill, the seemingly resident Raven flew across the M25 at Nutfield Ridge.

In the afternoon, Annie and I went for a walk at Denbies Vineyard near Dorking and I saw another Raven – my third in Surrey so far this year (probably based on Leith Hill) – in the trees at the western end of the Vineyard, followed soon after by a Hobby that flew south high across the vines.

As Johnny Allan says, every year is different. As is every day. Today was an excellent one.
Posted by Factor at 23:39