NEITHER RAINHAM NOR SHINE

Having looked at the list of posts I've created on this blog I notice the frequency has dropped considerably year on year. Two years ago I wrote 17 posts during the first two months of the year, 13 last year, and this is the tenth for 2013.

Pretty poor effort. It also reflects the depressing fact that I get out less month on month. The way things are going I'll eventually have plenty of free time but be too old to take advantage of it.

Some of the reason is work and some is guilt.

Having plenty of work when you are a freelance is fine – good news even – and when I work up in London now and again it makes me appreciate how lucky I am to have variety. Only occasionally do I have to take part in the dreadful London commute. I really wonder how people keep their sanity travelling up to town and back each day in a crowded train and similarly packed-out tube. It's also knackering doing that every day.

For the past 12 years I have worked most of the time from home and sometimes in London. Working from home means you aren't tied to a desk all day unless deadlines are looming. But it also means you can end up working all night if you have to – but that I really don't mind because I don't have to travel anywhere once I've finished.

The downside is temptation. To peer out of the window and see the sun is shining and there's a couple of Black Redstart and a male Hen Harrier at Rainham Marshes with your name on them and you can't find a reasonable enough excuse to drop everything and grab the scope and belt round the M25 to sate your birding needs. That sort of temptation.

I've even opted to work in a room with the windows blacked out. Seriously. What was the dining room is now an area where Annie does her voice-over work, so the windows have sound-proofing foam over them. Therefore, I am oblivious to the weather. It could be sheeting down with rain for all I know. Temptation dampened.

But I knew the sun had appeared today and I really wanted to go to Rainham, but I blew it the day before.

I went to Rainham yesterday instead, and what a complete and utter disaster that was.

I blame the Met Office. Is it me or is weather forecasting these days worse at predicting the weather than 20 years ago? Even Michael Fish didn't get it wrong as often as they do now. Last night the forecast said it would be cloudy all day, similar to yesterday, with the chance of drizzle. What happened? The thick cloud thinned, the sun broke through and the end of the day resulted in blue skies.

I went to Rainham yesterday because I thought the weather would be as bad for some time. But yesterday really was one of the gloomiest days on record. Cold, damp, grey, dark. Horrible.

The thing is I hadn't be out for a proper birding sortie for two and a half weeks. An eternity. I'd managed to convince Annie that our walk late on Saturday afternoon should include Papercourt Meadows so we were able to see three Barn Owls in action hunting late on – the most Barns Owls I've ever seen in one place.

Then prior to setting off to Rainham I had another go at that Firecrest at Banstead Golf Course. Such a glutton for punishment, but amazingly, after two hours I did eventually see it – although observers of the Higgs boson probably had longer views than I had of this incredibly elusive little basta.., I mean, bird.

The drive to Rainham wasn't good. The traffic through Dartford Tunnel had built up considerably, and to make matters worse I wasn't sure of the best place to stop once I got to Fleet Lane. By now it was getting late.

In the end, as it transpires, I had parked in the correct place, but hadn't walk far enough along the path from the barges on the river. A couple of Water Pipit, plenty of Redshank, but no Black Redstarts. Idiot.

The weather was dire, and the view later through the mist over the Marsh was very poor. No sign of the Hen Harrier. So, in a mood, I left for home knowing I'd wasted an opportunity. It was the wrong day to take a chance.

The drive back was even worse as it was 4.30pm and the congestion over Dartford Bridge meant it took forever just to pay the two quid for the pleasure of driving over it. I got home at about 6pm, knowing that politically (if you know what I mean) any other expeditions would probably now have to wait until next week. That knowledge in itself is depressing.

I looked online and low and behold: 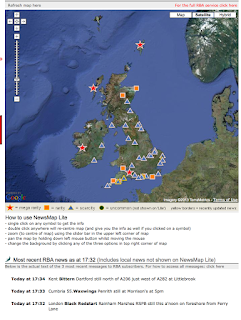 Now, I'm not a religious person in any shape of form, but I'm beginning to wonder whether there is some pattern emerging. I choose a day when I should stay at home, the weather is rubbish, I spend too long driving rather than birding and I miss what I want to see. The following day the weather is great and the Black Redstarts, Hen Harrier and 45 Waxwings all come out to enjoy the sunshine. If I go to work at the Post on a Saturday the weather is always lovely, and the following day? It's crap again. A conspiracy, I say.

I know it could be far, far worse (before anyone points that out). The guys who travelled to Shetland this week and dipped the Pine Grosbeak – now that is torture in extremis. The joys of long-distance twitching. I really felt for those guys.

One bit of good news (really! There is some). It was such a nice afternoon, some fresh air was too irresistible, so we went for a walk at Denbies Vineyard near Dorking. It was late so nothing too arduous was planned.

Along the walk at the western end of the vineyard (the Ranmore Common end) I got brilliant views of a Raven, my first for Surrey this year, perched in a tree just 20 metres away. It then flew low down in the valley and circled the treeline.

Some of the best moments are often those that are unplanned.
Posted by Factor at 20:32