BIRDING BLOGS AND A BOLD BONAPARTE'S GULL ON THE SUSSEX COAST

Birding blogs. These were the topic of local birder and pan-species specialist Steve Gale on his well-crafted latest posting. He brings up an interesting discussion point about the modern-day birding experience.

In the past, before the internet and pagers, birding was a voyage into the unknown, laced with anticipation and a fair amount of uncertainty.

Nowadays, almost everyone knows exactly where the majority of rare birds are within minutes of their discovery via pagers and Twitter, and in most cases very detailed directions to lead you by the nose to the exact place to see them from dawn until dusk on any day of the week.

To Steve this has taken much of the mystique, magic and excitement out of birding. Birding in the 21st century now takes little or no skill for the average birder to see very rare or unusual birds anywhere in Britain.

I can appreciate how this can be thought of as a sad state of affairs for those who have earned their spurs by garnering a wealth of knowledge through years of experience. The spiritual aspect of birdwatching is under threat.


In effect, an idiot who doesn’t know what a Coot is can see hundreds of unusual birds each year just by turning up at the right place at the right time having read about it on their pager.


But is this such a bad thing? Probably not.

It means birding is accessible to all, not just a relatively small group of enthusiasts. Modern technology has certainly helped me enjoy many a trip to see a lifer. I’ve also dipped quite a few…

The other discussion point on Steve’s post described how this lack of spirituality has migrated into a lack of originality in birding blogs – many just report on the birds seen on any given day and don’t add anything interesting to read along with it (I'm a culprit).

I, like Steve, crave originality. That’s why I enjoy reading Jonathan Lethbridge’s blog, because, apart from publishing stunning photographs, he has the ability to make you laugh, even with a caption for a photo. Writing witty prose is very hard to do well unless the writer has a natural affinity for it. Jonathan writes it with ease.

My other favourite blog, and probably the one I looked forward to reading the most, was Tom McKinney’s. Brutally funny, but alas, after posting his brilliant birding novella called The Greatest Lie Ever Told, he stopped writing.

There are other birding blogs I read because they give useful information, but on the whole there is a dearth of high-quality entertaining birding blogs.

I’m not suggesting for one minute that this blog is original, funny or informative. It is none of those things, but if readers get something out of it then all well and good. I’m doing it for free after all (as my wife often reminds me).

Now on to predictable birding tales and a return to being self-obsessed.

What made this gull appealing was that it was reported to be easy to view. Like many rare birds I've seen lately, this American vagrant appeared to be indifferent to close human observation. It has been seen regularly during the past few weeks on a small lake in Princes Park in Eastbourne – a recreational park with gardens and a play area for kids in the town itself, just 50 yards from the beach. 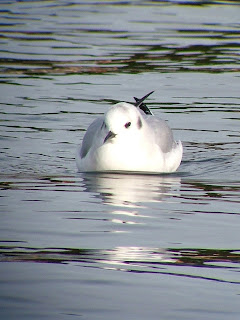 The gull often joins in with the Black-headed and Herring Gulls on the lake when people throw bits of bread for the ducks and Mute Swans. It had a habit of going missing for hours but had recently been a regular visitor to the lake. The sun was out and although it had yet to be seen that morning I headed off to Eastbourne. 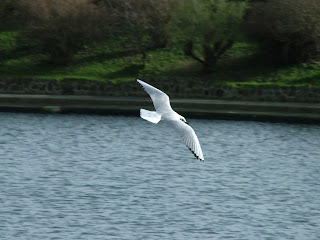 I was aware of a few birders in the park when I arrived and it took just a few seconds after walking along the lake edge (having been nipped by a swan as I walked past it) to spot the Bonaparte’s Gull.

It swam to within a few feet and was easy to distinguish from a Black-headed Gull. It was smaller, paler and its beak was finer and black. When it flew, it was clearly paler and had a finer black leading edge on the underside of its wings. When it landed on the water’s edge, it had pink legs compared to the Black-headed Gull’s red legs (I noticed on Wikipedia that the description for the Bonaparte’s Gull had its legs as red in colour, so I changed it).

I stayed for a good hour, managed a few decent digiscope photos and headed home. All very straightforward and satisfying.

Yesterday was wet and cold and was all about catching up with local winter birds. At Staines Reservoir I met up with a few people, including Ken Purdey and Frank Clarke, and while there caught up with a male Scaup, Black-necked Grebe, Green Sandpiper, Dunlin and, after having a chat with the guys who walk the basins, a Mediterranean Gull on the far edge of the north basin, perched on a rooftop.

After a fruitless trip to Tilford (where the woodland habitat has been decimated by enthusiastic felling) searching for a Lesser-spotted Woodpecker, I ended up at Thursley Common. Here I was hoping for a few Dartford Warbler, but alas, I couldn’t find one, but I did have distant views of the Great Grey Shrike, as well as a couple of Woodlark. The Woodlark brought me up to 100 birds for Surrey for the year. 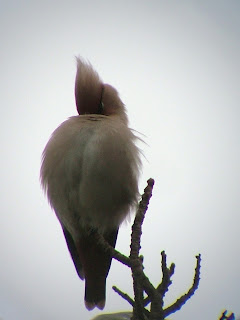 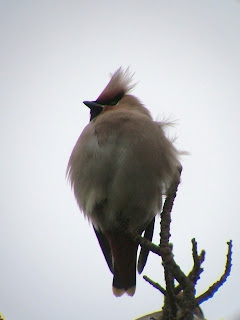 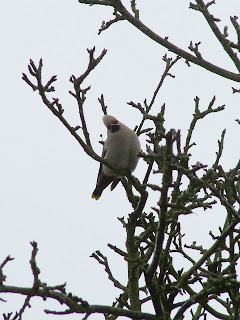 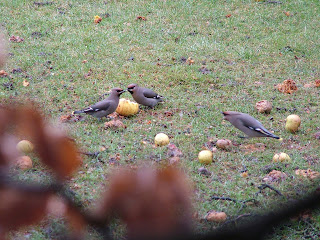 On the way home I dropped in at Onslow village, near Guildford, where 17 Waxwings were still feeding on apples in a residential garden in Ellis Avenue. One can never tire of seeing Waxwings.
Posted by Factor at 20:48