It was one of those days when I wasn't sure where to go. I didn't have a plan. If there had been snow and sub-zero temperatures, I would have headed to the local patch at Holmethorpe, followed by Beddington. But it was a breezy, occasionally sunny day with few places nearby that appealled.

In the end I went to Staines Reservoir to catch up with the Great Northern Diver, a regular visitor to the reservoir, seen yesterday for the first time at Staines this year. The icy cold wind blowing from the north was particularly unpleasant, but I met up with Bob Warden and Adrian Luscombe, both of whom I hadn't seen for quite a while, and they pointed out the Diver in the distance out on the south basin. It was difficult to see looking into the sun.

The Scaup were too far away on the north basin to pick out, and there was no sign of the Black-necked Grebe either.

The Diver disappeared from view pretty much as soon as I located it and after a while Bob headed off to Homewood Park, near Chertsey, to look for a pair of Wood Duck Franco Mareovic had seen a few days before, while Adrian had to head home soon after.

I headed off up the causeway to see if I could relocate the Diver and soon enough I found it much closer to the causeway. Normally it is hard to see Divers for very long as they spend so much time underwater searching for fish. You can be scanning the water and not see a thing even you are looking in the right place. 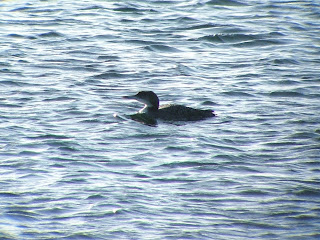 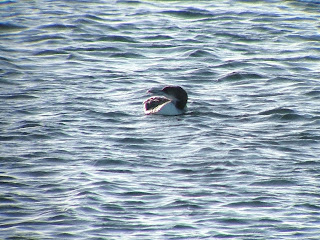 On this occasion the Great Northern Diver was having a break, preening itself and generally just cruising around doing very little. It was nearby so I had really good views of it. So with that and a closer look at more than 30 Goldeneye I headed off to Chertsey to see if I could find the Wood Duck – which I couldn't.

I saw my first Treecreeper of the year, 15 Siskins and Kevin Duncan, who was having a quick walk around the area.

I contemplated going over to the quarry close to the Queen Mother Reservoir to see if the Buff-bellied Pipits were still there, but that was likely to prove fruitless, and I even thought about going to Eastbourne in the vain hope of seeing the Bonaparte's Gull – a regular feature at Princes Park this past week or so – but it hadn't been seen for a couple of days.

So, in the end I went to Hyde Park to see the two juvenile Bearded Tit. At least I could guarantee seeing these lovely birds close up. I went back to Redhill via dipping the Firecrest at Banstead Golf Course for the umpteenth time and caught the train to Victoria.

At the other end the Tube was a nightmare – like an extremely busy Monday morning rush hour – as the Circle and District line was closed. Everyone had to travel via the Victoria line if they wanted to head west.

No matter. I got to Knightsbridge by 2pm and it wasn't long before I was enjoying watching the two Bearded Tit feeding in the Diana Memorial reed bed on the Serpentine. The area was very busy with plenty of tourists and people going for an afternoon walk. The two juvenile birds seemed totally unaware of anything going on around them, including plenty of birders taking photographs and onlookers asking questions. A worthwhile visit.

In the meantime, the Bonaparte's Gull reappeared in Eastbourne and a Buff-bellied Pipit turned up again at the Kingsmead Quarry. Maybe next week.
Posted by Factor at 20:07