The weather this morning was in complete contrast to the previous week. The icy cold nip in the air had gone and was replaced with a distinctly milder and sunnier day. Much of the snow had disappeared.

I was out at first light and headed to my local patch to try and find a Jack Snipe. I had been given instructions to where some had been seen but I couldn't locate one. Three Snipe, two Siskin and a Grey Wagtail were my only successes.

I contemplated staying locally, or travelling once again to Beddington, but Dodge had put me off that idea as the wind direction had changed to westerlies and the end result was likely to be disappointing. So instead I went on a tour of Surrey, starting with Barnes and the WWT London Wetland Centre.

Six Bittern had been seen at the Centre yesterday so I was pretty confident I would find at least one. In the end I saw two Bittern, both were quite distant and hard to see in the reeds, but they both ventured out into the sun for a while and so I had reasonable, if not sensational, views. While at Barnes two Cetti's Warbler sang loudly in the reeds, and a Dunlin flew up from the main lake with some Lapwing. A redhead Smew showed well and at least 15 Siskin were feeding in the trees.

So a good start. After that I set off for Staines Reservoir via Kingsmead Quarry where there was no sign of the Buff-bellied Pipits. Staines was pretty fruitless, with another Dunlin and eight Goldeneye the highlights as I couldn't find the Scaup or the Black-necked Grebe.

After this slight setback I drove to the west side of Surrey and Thursley Common. Target bird here was obviously the Great Grey Shrike, but I was also hoping for Dartford Warbler. Thursley always means a long walk, especially when searching for a lone Great Grey Shrike. The area is big and this Shrike covers much of it, so finding would be a needle-in-a-haystack job.

It took a while but find it I did. Scanning from the tumulus, the Great Grey Shrike was perched in a tree about 400 yards away in Ockley Common, and to get closer meant trudging through very wet and bogey terrain, with loads of standing water. 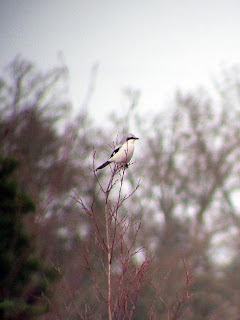 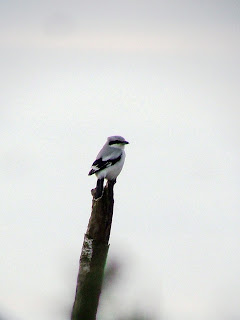 Times was getting on, it was past 3pm so after a difficult walk back to the car through the mud and water I set off for my next location, Crooksbury Common. Crooksbury is a really easy place to walk around, as it's so compact. It's a great place to see Brambling, thanks to Rich Horton, who had discovered quite a number flying in to roost with Chaffinch.

I tried a couple of weeks back but failed, but this time I found a couple of Brambling quite easily. By now it was after 4pm and with the light fading I set off home. At the last minute I opted to make a slight detour to Papercourt Meadows, near Ripley, in the hope of seeing a Barn Owl.

The ground here was completely saturated, not ideal for walking on – just as well I had wellies. I couldn't see any owls at first but when turning round I realised I'd been facing the wrong way as a Barn Owl was hunting behind me at the western end of the Meadow. It perched up for a few minutes – the record shot of it is very poor but there was little light available – before it flew off and out of sight.

A long and busy day, and I'm completely knackered after walking quite a few miles. It's been another enjoyable one, though. I don't know what's come over me...
Posted by Factor at 23:21