I'm forced to admit I had a really good day on Saturday. Having visited Beddington and failed to connect with the Glaucous Gull on Thursday I took Dodge's advice and arrived at dawn on Saturday morning for another go. Dodge turned up at the same time and with plenty of snow on the ground we walked over the bridge and to the hide at 7.50am.

As we walked to our vantage point we both noticed a large bird flying south. "Short-eared Owl!" said Dodge. He asked to have a look through my bins. They are very old binoculars – not expensive. Self-consciously I handed them over. "Bloody hell. When were these last used? When Rommel campaigned in North Africa?" Probably.

Immediately he identified the bird as a Short-eared Owl. A great start to the morning. We'd only been at the Farm less than a minute and we'd got a good one to kick things off.

We met up with a guy called Steve (he has a nickname – everyone at Beddington does – but I can't remember what it is). He was already set up in the hide but he didn't see the Owl.

Half an hour later we were joined by Kojak – I hadn't seen him since last spring – and Roy 'Bulldog' Dennis.

It wasn't long before Kojak was on to the Glaucous Gull. It wasn't difficult to find. This big, bulky dusky coloured Gull was on the ice on the main lake preening itself and pecking at a hole in the ice for a good quarter of an hour. Target bird sorted. 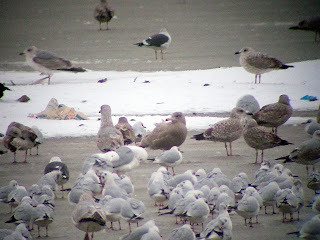 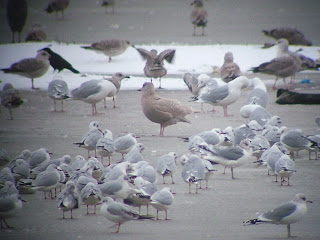 If you enjoy birding and banter while birding I can't think of a better place to be than Beddington. As the morning progressed we were joined by more of the Beddington gang, including 'Pinpoint' Peter Alfrey and 'Tank'. Plenty of good-humoured chat helps distract you from the fact you have been standing in the same spot for more than an hour and your feet feel like blocks of ice.

During the next 45 minutes a few Reed Bunting and Tree Sparrow fed from the feeders, a number of Lapwing and Fieldfare flew over, plus a couple of Snipe dived into the foliage on the edge of the lake.

All was then quiet until just before 9am. And then the next 30 seconds became the most dramatic I've experienced so far this year.

Suddenly the birds stirred on the lake as a Kestrel flew over heading south. Then seconds later a Peregrine flew low across the lake heading north, creating havoc with the Gulls.

But best of all, Dodge called out "Merlin!". To the south over South Lake a small raptor was in pursuit of a Meadow Pipit. Fighting for its right to live the Pipit desperately headed towards the deck and immediately the Merlin twisted in the air, fanning its tail and turned with impressive agility to follow it. As it dived over the horizon we lost sight of it.

It was brief, but it was fantastic, because this Merlin was the first I had ever seen in Surrey. About 30 minutes later it made another appearance over the South Lake, and then while we were all congratulating ourselves on a great sighting Dodge's phone rang. It was Tank. Dodge had been drinking some tea but immediately threw the beverage to the ground and chucked the cup into the hide. He set off back up the bank and we all followed. Tank had the Merlin perched in a tree close to the railway line. By the time we had all got there through the snow it had flown off, but no matter. This drama is why I go birding. The hunt for a bird.

After that it all went quiet again. I was almost relieved. A couple of Yellowhammers flew over but nothing else much was happening. I had to leave at 11am – I would have loved to have stayed all day but it had been a brilliant morning – the best of the year so far.

After I left the rest of the guys saw a flock of Golden Plover fly over and three Jack Snipe. Jack Snipe would have been nice but they will have to wait.

So patch birding can be fun. Ask Rich Sergeant at Tice's Meadow. Yesterday he had a Gannet, Yellow-legged Gull and late on eight Bewick's Swans drop in on his patch.

I have, in the meantime, discovered my natural home – a landfill and former sewage farm close to Croydon in the middle of south London suburbia. True heaven. Who'd of thought.
Posted by Factor at 00:21