It has been a bit of a struggle this past week if I'm honest. And by the end of it I can't say I have enjoyed my birding that much.

After the Goosander/Shelduck debacle I thought I'd go to Bookham Common last Sunday afternoon to see if I could locate the Hawfinch reported there. Bookham is the place to see these magnificent finches during the winter months, and I've been lucky enough to catch up with them in the past.

Not this time though. I walked around the area behind the station and up to the car park at the Little Bookham end and found very little during a muddy couple of hours apart from a few Bullfinch. To cheer myself up I set off for Staines Moor to take in a bit of Short-eared Owl action at Staines Moor. Three owls duly obliged to show themselves, with one hunting close by. It was a gloomy old afternoon so photos via the scope were rubbish to say the least. 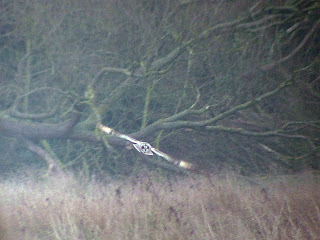 I also flushed a typically neurotic Water Pipit by the river, which predictably didn't let me get very close to it thereafter.

I had another go at finding the Hawfinch a couple of days later. Again no luck and again another gloomy, grey afternoon.

At this point I wasn't too worried. I thought I would see one before the winter is through but I didn't want to spend literally hours wandering around a sodden Bookham Common looking at nothing.

Enter stage Rich Sergeant. The Tice's Meadow birder, prog rock fan, avid Man City supporter (what a mixture) and – despite his interests – a top bloke who spent nine months of last year in Afghanistan and yet still managed (and this is no exaggeration) to see more birds in Britain in the remaining three months than I have in a lifetime, is on a bit of a twitching quest at the moment and is on a very good run.

Wherever he decides to visit, and he chooses wisely, he invariably gets results. I know we're only into the second week of the year but I don't think he has had a dip yet (he says he has). I've had five already. As twitching successes go, we're like chalk and cheese.

He will disagree with me vehemently I'm sure, but just to compare our respective fortunes of late, Rich went to Bookham on Tuesday and on his first visit he saw the Hawfinch. Not only saw it, but it virtually posed for him 20 yards away for at least a quarter of an hour.

I went to Bookham at first light on Wednesday morning and spent two hours wandering around again seeing nothing of note. I thought I spotted it fleetingly but by the time I managed to focus the scope it had gone. I was joined by Keith Kerr and his better half and we spent another hour looking to no avail.

I took time out to visit Boldemere lake at Ockham Common to see a Pintail that wasn't there and then returned. Keith hadn't had any luck in my absence and by 11.30 was forced to make tracks home. I decided on one more circuit around the area before giving up. My mood wasn't good. This wasn't much fun at all. In fact, I felt downright bloody miserable.

Just as I was about to leave, there it was. The Hawfinch was stood stock still clinging to a branch of a blackthorn (or hawthorn – I've no idea!). I got relatively close to it and through the scope I could see it was breathing quite heavily and its strong beak had some dirt on it. It must have been hard at work feeding in the undergrowth. 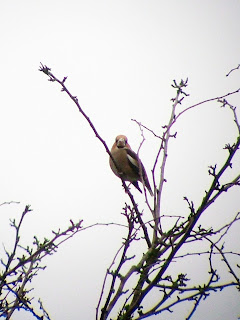 It was having a rest and I had great views for a few minutes before it flew off into the shrubbery once more. Mission accomplished, but for the first time in a long while I didn't feel euphoric. I still felt quite deflated. And that really concerned me.

I'd spent eight hours in total wandering around this boggy mudbath and I saw the Hawfinch for about five minutes. It was a result, but was it really worth the effort?

For the first time I'm not really sure. I love Hawfinches but I had been, as Steve Gale succinctly put it, chasing rather than birding. I like seeing unusual birds, but somehow I have to find a way which is on my terms.

To make matters worse, the following afternoon I went to Banstead Golf Course to see the Firecrest that has been a feature for some weeks there. It has been seen regularly by many people. I've a history of not seeing Firecrest at this very spot, and it didn't disappoint. I didn't even here a bird, let alone see one. Not a sound. All was still and silent. So I left, probably never to return. I have come to hate that place.

So I went to Cutt Mill Ponds to find a Goosander, which I did. Three of them, one drake and two females. And yep, they look nothing like Shelducks.

After that a quick visit to Crooksbury Common, which was deathly quiet until the Chaffinches came in to roost. I hoped to spot a Brambling, but as it was getting dark, I couldn't.

Saturday morning. Before going off to work at Racing Post for the afternoon, I trawled up to the Queen Mother Reservoir to see the Buff-bellied Pipits. If they weren't around, at least there would be the Slavonian Grebe and wintering Long-tailed Duck as compensation.

Who should I see up there but the Tice's Meadow gang – Rich, his namesake Rich H, Matt and Dave.

I apologised in advance for my appearance, as it was certain with me there they would see bugger all. And sure enough, bugger all was seen. At least it was great to catch up with the guys – I'd like to spend more time with them on a few trips, but I'm pretty sure I wouldn't be invited as their chances of twitching anything would probably drop through the floor as a result.

I had to leave empty handed but the guys caught up with the Pipits about four hours later at the Kingsmead Quarry where they seem to prefer the puddles rather than the vast expanse of the reservoir.

So, I now lack motivation. Totally childish I know (it's because I'm an only child, so my wife says), but this isn't how an enjoyable pastime is supposed to make you feel.

It will be forgotten the next time I go out and see something memorable, I am certain of that. Could even be tomorrow, but I'm still trying to work out what sort of birder I am. I just don't have Rich's enthusiasm, patience or birding knowledge to year list with any conviction. He knows what he's doing, whereas I don't most of the time. Having said that, he texted me earlier tonight to let me know that the Yellow-browed Warbler he thought he saw at Moor Green Lakes in Berkshire was in fact a Pallas's Warbler. So, at least good birders get it wrong too.

I suppose there is always patch watching, but that isn't really my thing as yet either.

So what sort of birder am I? An adolescent one, I think.
Posted by Factor at 22:41