A CASE OF MISTAKEN IDENTITY AND CREDIBILITY

It's the beginning of January and for many it's time to get going with their lists. Lists come in all manner of guises – from life lists to garden year lists, and even year lists on the commute to London or the drive on the M25.

Having started a list I didn't finish last year - the annual Surrey year list - and knowing I have to start all over again, I'm not sure I can really be bothered.

It's such a chore having to go over the same old ground again just to create a list that no-one apart from me really cares about. If I managed 170 Surrey birds this year, other listers will either be pleased they saw more, or cheesed off they saw fewer than me.

Having said that, it is useful to be aware of the best sites around Surrey for specific species during the winter. It will be a surprise if you fail to see any of the following:

Sounds a good list of birds, and if you can pack in many of these during the short winter days you will have a very enjoyable time.

I'm toying with just adding to my life list (which is paltry compared with many hardened birders) but that will mean a lot of driving and I don't have much enthusiasm for that at the moment, or just going out to see as many of my favourite winter birds as I can such as Short-eared Owl, Hawfinch and Great Grey Shrike.

This past couple of days I've managed to fit in a bit of birding. Not much, but still enough to get the old juices going.

My first proper outing was yesterday with a brief visit to my local patch at Holmethorpe.

Smew are a regular visitor to Holmethorpe and they haven't let the side down this winter. For the first time since I discovered birding, a drake Smew has appeared alongside a pair of redhead females. 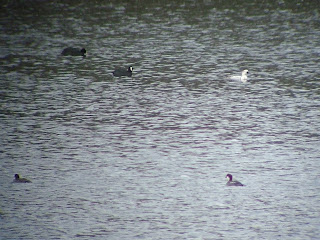 First discovered by local mega-patch birder Gordon Hay at the end of last month, I caught up with the drake on Thursday morning on Mercers Lake. Yesterday morning I went over to the lake and found the drake with two females. Not only that but I also discovered in the distance (why are discoveries always bloody miles away) six Goosander.

This was, for me, a great find. I don't, as a habit, find any birds of my own. In the past five years I have only ever found one Black-tailed Godwit and one Black Tern on my patch, so six Goosanders – the first Goosanders found on the local patch on the deck (or in the water) in my memory – was a massive find.

I went home very happy with myself. Annie and I then set off to Cranleigh for the afternoon (I have to admit I sort of orchestrated the trip, but that is a story in itself) and there I saw four Waxwing perched in a tree directly opposite the Baptist Church. These four had been present for a few days and since there were only this quartet, compared to the scores a couple of years ago in the very same tree, I was pretty confident they would still be there. The berries were ample food for them and should last them a good few days yet. 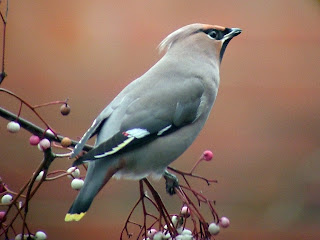 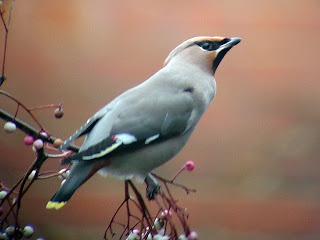 After half an hour enjoying the Waxwings we headed off for the Parrot Inn at Forest Green for a very good lunch (if you are in the area go and sample their food – a bit pricey but very good).

While sitting down waiting for our lunch, the phone rang.

It was Graham James, who I hadn't spoken too for some time. I'd previously texted him, Gordon Hay, Ian Kehl, plus Twitter my discoveries during the morning. It was good to speak to Graham, but he delivered a bombshell.

He'd been down to the patch that morning and had got back just as I sent him the text. "That was bad luck," I said. "The Goosanders must have dropped in just as you left."

"Yes," said Graham. "I told Gordon your news and he went down to Mercers Lake, but all he found were six Shelduck..."

Bloody Nora. A massive cock-up. How could I make such a mistake? I was stunned. And embarrassed.

The birds where right at the opposite end of the lake when I first saw them and I just assumed, I don't know why, they were Goosanders. Gordon had seen some fly over recently so I must have somehow convinced myself these could have been them.

I showed Annie a photo of a Shelduck and one of a Goosander. To make me feel better she said: "How could you get them mixed up? They don't look anything like each other."

She was right. They don't. And it's not as though I've never seen either before. Shelduck are a regular visitor to Holmethorpe and I've seen plenty of Goosander. Whatever the reason, my credibility has taken a knock. I must be losing my marbles. It's a worry.

I just hope tomorrow morning I don't mistake a Hawfinch at Bookham Common for a Greenfinch.
Posted by Factor at 21:39