Twitching. A guilty pleasure. I did plenty of it on Saturday and for once all targets proved to be successful. I've come to the conclusion twitching relies little on skill. I saw plenty of good birds on Saturday but skill never entered the equation.

Skillful birders can find birds they aren't necessarily looking for. Gordon Hay at Holmethorpe is a good example of that. He finds fantastic birds just by peering through his bins for them. The Beddington crew are equally good. They look up into the sky at the right time, a bird flies past, and they know instantly what it is.

Twitching is all about driving for miles, pointing the scope in the right direction, then waiting, seeing or dipping. That's it in a nutshell. When it comes off it's great, but when it doesn't it is utterly crap. Truly miserable. Twitching is an emotional response to birding. The quick fix or the crashing low. Take your pick.

It also relies heavily on knowledge of a site. If you know the area a bird has been seen, it's usually relatively easy to find the right place to view. If you don't, you might spend hours wandering around without a hope in hell of locating the bird. I do this a lot. On a twitch I rely heavily on locating birders before I see a bird.

On Saturday I had three targets, in no particular order.

A couple of weeks ago I had wanted to see the Penduline Tit at Stodmarsh Nature Reserve, near Canterbury in Kent, but all hopes of escaping weekend domestic chores came to nothing. It meant the opportunity to see this rare reed mace-ripper would be apparently futile, as predictably the bird went missing soon after, presumed to have flown off to pastures new. But on Friday someone had seen it again. Target one.

A week ago Dominic Mitchell took a group on a Gull ID event at Rainham Marshes with gull expert Klaus Malling Olsen, when at the end of the session he spotted a male Hen Harrier flying over the silt lagoons at the end of Coldharbour Lane. It has been seen regularly since. Target two.

Next door to the reserve at Rainham on the river – happily skipping over the rocks and feeding within the detritus swept up on to the edges of the sea wall – three Black Redstarts, one male and two females, have stayed put for more than a week. Target three.

I went over to the area on Tuesday but had no luck with the Redstarts or the Hen Harrier but not having a clear idea where to look somewhat hindered any hope of seeing either.

So on Saturday I planned to make amends. Setting off at sunrise I knew where to look for the Black Redstarts and had a decent idea of where to expect the Hen Harrier. On a cloudy day, I parked up along Ferry Lane, walked up to the sea wall where I met up with local birder Marco, and looked out on to the rocky coastline, where I immediately spotted the male Black Redstart. A really handsome individual, the Black Redstart was a great start to the morning. I couldn't find the two females, but a Grey Wagtail kept the Redstart company, as did a Brown Rat. Also on the edge of the river at low tide were plenty of Redshank, Shelduck, a couple of Oystercatcher, five Black-tailed Godwit and a Grey Plover.

I ventured over to the Serin Mound at Rainham to check out the reserve for Harriers. I saw one Marsh Harrier cruising the area but no Hen Harrier. There wasn't much else about apart from a couple of Ruff keeping a flock of Lapwing company in a flooded field in the centre of the reserve.

I met another East London birder, Mike Messenger – great name and extremely talkative, so quite apt. Despite the non-stop chatter he was a good old boy and very knowledgeable. However, after an hour without a sighting of the Hen Harrier (we did see three Golden Plover) I thought it best to make tracks to my next destination, Stodmarsh Nature Reserve. I'd head back to Rainham later when the Hen Harrier was more likely to appear.

The Penduline Tit had been seen during the morning, which was good news, but I'd never been to Stodmarsh before, so I intended to rely on the some birding regulars steering me in the right direction.

It didn't take that long to get to the reserve, just over an hour, but it took a while to find my bearings. I heard two and saw one Cetti's Warbler on my walk to the new boardwalk where, luckily for me, three birders were staring out into the reeds. 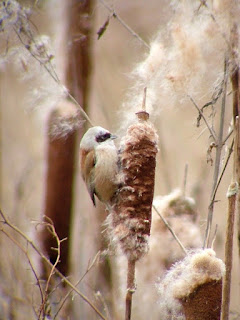 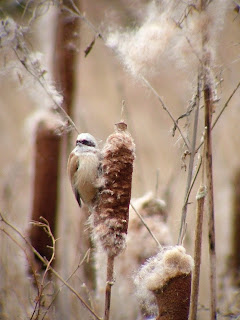 The Penduline Tit was busy decimating the reed mace. At some points it was completely covered in the seed residue. I had great views of this smashing little bird for about ten minutes before it flew off into some bushes where it called out before going quiet. 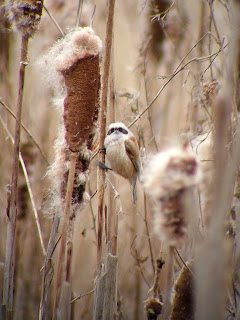 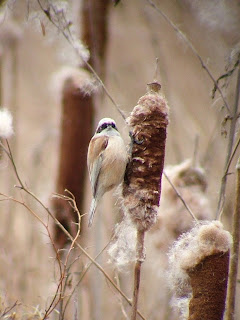 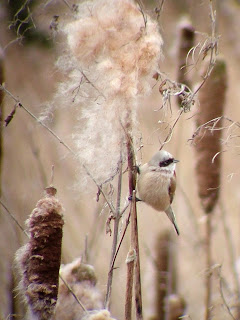 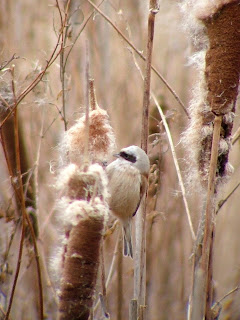 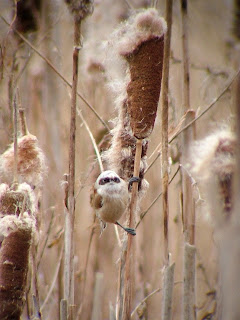 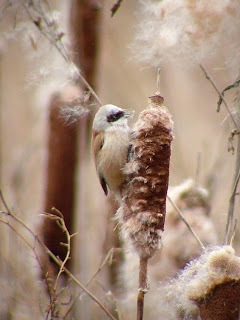 All very straightforward but I had been very lucky. If I had arrived a few minutes later I would have missed it – and that's assuming I would have known where to look, because as soon as it flew off the three other guys headed back to the car park.

By now it was heading towards 3pm, so I headed back to Rainham.

An hour and 20 minutes later I was back up to the Serin Mound to join a group of birders, including Mike Messenger again (who was still chatting to anyone who would listen). We had to wait about 45 minutes before a Short-eared Owl came into view, typically mobbed by Crows. At one point it soared high up with its corvid companion before swooping down to continue hunting for food. Not long after a Barn Owl accompanied it along the silt lagoons.

Then 15 minutes after that the male Hen Harrier arrived on the scene. Magnificent. It joined the two Owls on the food shopping spree and so a thoroughly enjoyable ten minutes was spent watching these great birds at work. You can't beat the sight of owls and raptors hunting, especially all together.

Once they disappeared from view I hopped in the car and drove over to the river on the way home, where I caught up with one of the female Black Redstart and also a Common Sandpiper along the shoreline.

All in all, a very good day. Thanks goodness for that.