The sun actually came out for a few hours on and off today and since I will be focusing on work, Annie's birthday and the Easter break for the next week, it was the last chance to venture out for a few days.

Another opportunity to see the male Ring Ouzel half an hour up the road at Clandon Park was too tempting to ignore so, with plenty of sheep for company, I walked up to the same spot at TQ035517 to see if it was still around.

It took even longer to find than yesterday, but being a bit dim I didn't think to look over the fence behind the small row of trees and bushes into the horse paddock behind, where I found the Ring Ouzel feeding with a couple of Blackbirds and a Redwing. Within a few seconds it flew off into the bushes. I think this Ouzel recognised me from the day before as it was giving me the 'chack, chack, chack' alarm call constantly from there on in. 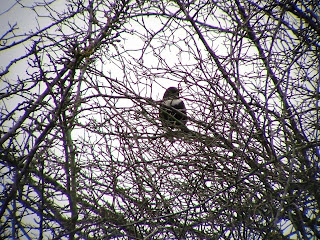 For the next 40 minutes or so the Ring Ouzel was quite mobile – it was clearly wary of me. It flew high up into a tree before flying way off on to the top of a pine before a raptor put all the corvids up into the air and it flew north into another copse. 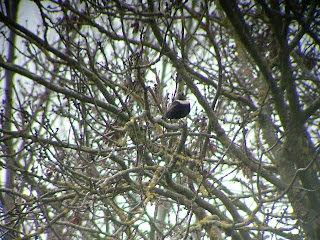 There was little point on terrorising the little blighter any further so I left for Surrey's patch of the moment – Tice's Meadow.

I hadn't visited this remarkable patch for about two years. The wetland area has had a amazing few weeks. Nowhere else in Surrey has a better record than this relatively small landlocked area. It has had Bewick's Swan, Gannet, Little Gull, Kittiwake, Black-tailed Godwit, Grey Plover, Little Ringed Plover and Wheatear to name but a few. A remarkable oasis in the middle of the home counties.

I met up with Rich Horton – Tice's MD – and he kindly pointed out two Black-tailed Godwit happily feeding. He also found one of two pairs of Pintail for me. It was a really brief visit, I had other duties to attend to, but I will be back – as someone once said.
Posted by Factor at 23:56