Nothing like a bit of tabloid-style alliteration in a headline. And it was accurate in this case.

If you had asked me three weeks ago what the two birds I would most like to see were, I would immediately have said a Roller and a Bee-eater. Both are charismatic species – extremely colourful and bespoke – and rare visitors to the British Isles.

Three weeks later and I have seen both. On Saturday afternoon I noted a Bee-eater had been present all day at Pegwell Bay, just 15 minutes down the road from where my parents live in Cliftonville. This stretch of coastline has had its fair share of rare birds recently, notably the Dusky Thrush at Margate Cemetery – a bird I was unable to go and see.

Bee-eater sightings tend to pop up on pagers and websites such as Rare Bird Alert, and then pretty much forgotten, because they tend to be fleeting affairs – either a fly-over or a 'heard only'. But then, just occasionally, one will stay put for a while longer than is usual and this was one of them. It was still in the Stonelees Nature Reserve area of the Pegwell Bay Country Park late in the evening.

Predictably, it was mobile but with cloudy skies and a brisk easterly wind I fancied it might still be around the following morning. There was no news until about 10am when the Bee-eater was reported still on site.

A couple of hours later a Black Kite – another bird traditionally seen mostly passing through – discovered the day before near Faversham, had been found again cruising the fields in the same area just off the M2 near Selling.

A twitchable Bee-eater and Black Kite within 25 minutes of each other... These I had to see.

I set off in the early afternoon and found the Selling road off the M2 easily enough and as viewing areas go, the Black Kite vista was very straightforward. I parked the car on the grass verge and looked across the fields to the hills on the horizon to witness the Black Kite soaring and gliding majestically headlong into a stiff breeze above the corn fields. 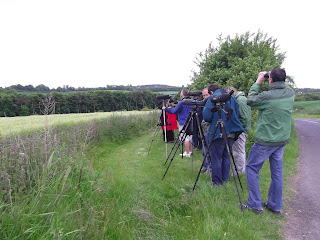 The Kite looked quite dark against the sky but actually is much lighter brown in colour. A brilliant bird and a good start to the afternoon. The bird is still present as I write this and is well-worth a visit if you are in the area. Depending when you arrive the Kite has been seen close by as it sometimes perches in trees nearby. 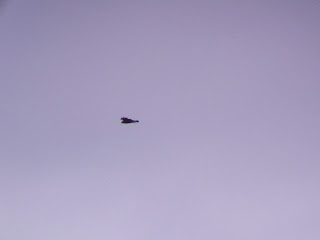 I stayed for about 40 minutes, but was keen to continue on the journey along the Isle of Thanet and I arrived at the Stonelees Nature Reserve end of Pegwell Bay Country Park just after 3.30pm.

The Park is a maze of paths, but eventually I found a group of birders gathered together. I shouldn't have been surprised, but both David 'Devilbirder' Campbell and Ian 'Eagle' Jones were amongst them. The Bee-eater had just flown off into some vegetation having been perched close by in some bushes before a dog walker flushed it.

It was about half an hour before the Bee-eater flew up briefly and then dashed back into the bushes. A split-second view, and then came another slightly longer sighting as it hovered briefly above the trees before diving back into them again.

Eventually it took off with more determination, looking like a wound-up toy bird that had just been let loose. It's flight was unpredictable, as it would change direction in an instant, but it was clear the bird was heading back to its favoured area at the Stonelees Nature Reserve end.

This was a pattern that would occur throughout the afternoon. We would all scurry to one end of the park where the Bee-eater would perch, and just as we were about to lock on to it with scopes and cameras it would fly off again. Being so mobile, after an hour – while I'd had good views of it in flight – I had yet to snap a digiscope shot of it.

It took at least an half and a half before a couple of birders, who had been wise enough not to chase around after it and waited for it to return to its favourite perch at Stonelees, pointed out the Bee-eater showing well.

At long last I had the views of this extraordinary bird I had wanted. Having had a few disappointments during the spring, missing some rare sightings, the past three weeks have been about the best I've had for sometime, and this Bee-eater was the icing on the birding cake.
Posted by Factor at 10:58