Before setting off for a trip to Lakenheath Fen in Suffolk and Cley Marshes in Norfolk very early yesterday morning, and having had a good run of late with four rare bird sightings over a three-week period, I just had to pay Cuckmere Haven a visit on Thursday evening for the American Golden Plover that had been there for a couple of days.

Reading from reports it was clear this American vagrant was easy to view from a close distance, just off the footpath, a mile walk from the Golden Galleon pub on the east side of the river, heading towards the estuary and the English Channel beyond.

The weather had cleared from earlier in the day but it was still quite breezy. Having parked up at about 6.30pm and walked the 20 minutes to the pool just north of the scrape it was a very easy twitch.

There sitting quietly on the grass edge to the pool, just ten metres away, was the American Golden Plover. It would occasionally get up and stretch its wings before going off for a quick feed around its recently acquired back yard and then return to the grassy mound again.

It couldn't have been easier, which I was thankful for because I had to get back home and get ready to set off for Aldershot and Rich Horton's house where I was meeting up with Rich, Matt Phelps, Rich Sergeant and Dave Baker – the Tice's Meadow gang – before setting off overnight for Lakenheath. 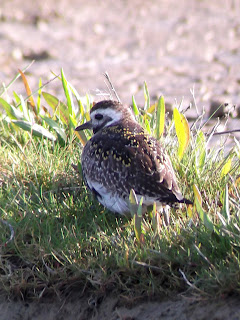 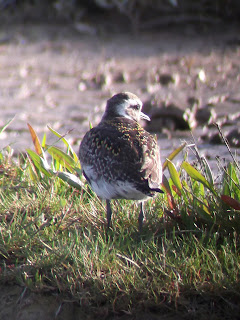 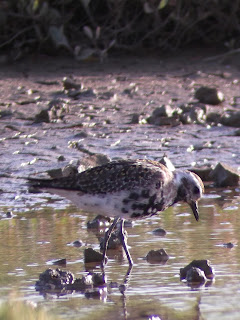 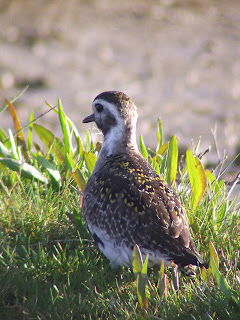 Matt and Dave were already at Rich's house when I got there just before midnight but Rich Sergeant, who was the designated driver, was held up driving back through London having been at an Army dinner.

Once he arrived and we'd loaded the car, we set off at around 1am and got to Lakenheath before 3am, where we met up with Mark Leech. It was already starting to get light, but sleep was needed. While most got their sleeping bags out and slept outside, Matt and I chose the car.

A decent sleep wasn't really on the cards. I probably dozed for about half an hour during which time a Cuckoo woke me up.

A tap on the window and it was time to get up. We also met with Frank Boxall and we set off on our walk around the reserve and, hopefully, a Golden Oriole sighting, just after 4am. There had been rumours a male had left the reserve last week and that there was little chance of them breeding here this year, but Mark had seen four Oriole around the poplar trees to the south west of their usual breeding area just a week earlier, so there was still hope.

The first bird we saw was a Barn Owl. We watch three in all, one of which had caught breakfast. The first Bittern was heard booming, three Curlew flew over, while numerous Reed Bunting, Reed Warbler and Sedge Warbler began to sing heartily.

A few minutes later and the first Grasshopper Warbler began reeling, and a Common Crane was heard calling in the distance. Good news.

Along the walk, a Cetti's Warbler burst into song and we saw a pair of Marsh Harrier hunting plus a Hobby flew out of the trees. Two more Bitterns boomed in the distance.

More than an hour in we saw two Common Crane feeding in a field to the north east, then suddenly Rich Sergeant stopped in his tracks. He had heard a Golden Oriole call in the distance. I couldn't really make it out but it called twice from an area about half a mile away from us.

We headed for the poplars in that part of the reserve, where we heard and then located our fourth Grasshopper Warbler of the visit, perched up in the reeds, reeling its head off. 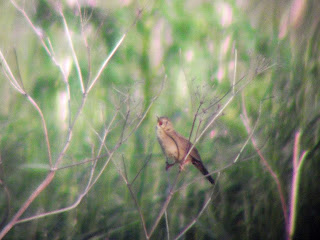 Another pair of Marsh Harrier came close by, another Cetti's Warbler song echoed from inside the poplar wood, but try as we might we never saw, let alone heard, a Golden Oriole after that initial song. It was a pity, but that is the nature of birding for Orioles. They are notoriously hard to observe.

Heading back towards the car park, we saw a number of Bearded Tit in the reeds, a Kingfisher flew across calling, another Grasshopper Warbler was seen reeling in the reeds close to the path before flying off and another Cetti's Warbler sang and then flew across the path into a bush.

We got back to the car park and set off for out next port of call, an area close by that Sean Foote regards as one of the best areas to see Stone-curlew. As it turned out we couldn't find any so instead we went to the traditional Stone-curlew location at Weeting Heath.

We timed the visit well as the warden and his team were due to ring the chicks and that would mean the adults would disappear for some time. We just managed to get to the hide and watch a pair of Stone-curlew with its chicks before the warden walked in and disturbed them.

A brief, but successful visit. Next stop breakfast, a full English one at a cafe in Brandon, and then it was all-systems-go heading north for Cley Marshes. Having never visited either Lakenheath, Weeting Heath or Cley before, this was turning out to be a great trip.

We got to Cley by 11am. After a stop for coffee in the visitors centre – from where we could see a Spotted Redshank in summer plumage out on the reserve – we went for our walk. The first bird we saw was a Bearded Tit before we stopped along the east side of the reserve at the Serpentine, where two Pectoral Sandpiper were feeding on the edge of the scrape. A really good bird to see in June. 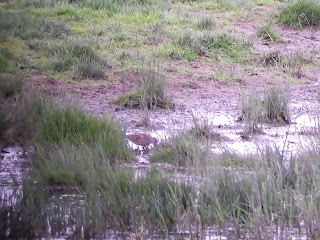 Cley is an excellent reserve. Not only is there a well-positioned visitors centre where you can view the whole reserve and watch birds at your leisure while drinking coffee and eating cake, the reserve also backs on to a shingle beach and the North Sea, so there is the prospect of some sea-watching.

This is what we did next. Up on top of the shingle dunes we watched as numerous Sandwich Tern and at least 10-15 Little Tern flew along the edge of the shore. A great sight. Further along an Oystercatcher was sitting, presumably, on a nest and gave close-up views, as did one of many Avocet, also sitting on a nest on the shingle.

In fact, the Avocets are clearly doing well at Cley. They were everywhere, as were Shelduck. Before going to the hide by the North Scrape we saw a Spoonbill which was, as is usual for Spoonbill, sleeping.


From the hide a Little Stint was feeding close by, being seen off occasionally by a pair of Avocet chicks. From here we could see the sleeping Spoonbill, the Spotted Redshank and a Ringed Plover. 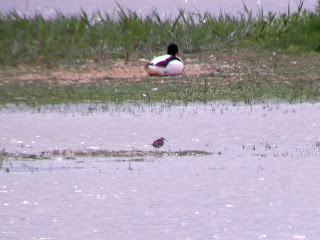 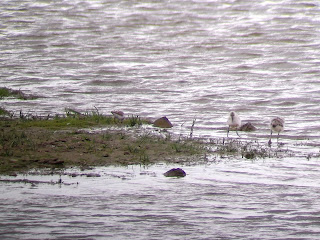 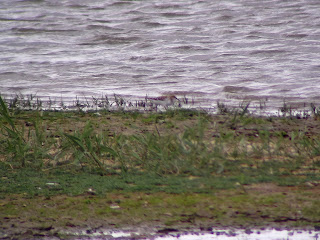 On the walk back to the visitors centre I found another Spoonbill (it could've been the same one as earlier) on the Simmond's Scrape, while a Marsh Harrier sent the gulls and waders up as it circled overhead.

Back at the visitors centre I sat back, exhausted, and enjoyed a pot of tea. We'd had an excellent day – it was knackering and maybe we didn't see the mega birds at Lakenheath we'd hoped for but nonetheless we'd had some really good sightings during 11 hours of birding. I don't thinking any of us could have walked another step.

The drive back took more than five hours, including the usual Friday rush-hour snarl ups on the M25, and despite having only had about an hour's sleep and with a head full of hay fever, Rich S did a fine job getting us to Norfolk and back. The time passed quickly on the way home, spent talking birds and listening to Rich's compilation of Porcupine Tree – one of his favourite prog rock bands – which I had to admit was pretty good. Even Kate Bush was bearable!

Days don't come much better than this. Spending a day out with a great bunch of lads birding from dawn until you drop.
Posted by Factor at 20:48