The problem with seeing a Roller, a truly A-list bird, is it's difficult to get excited about day-to-day birding, particularly in Surrey.

I regret not going for the female Red-backed Shrike on Pewley Downs near Guildford on that remarkable Sunday, but I'd already set sail for home by then and by the time I'd really contemplated the idea of going I'd already sunk a few too many glasses of a very nice Sicilian white wine with lunch.

I've yet to see a Red-backed Shrike in Surrey and the remarkable thing about this one was it involved my former Racing Post colleague and friend Francis Kelly, who was on an organised butterfly walk. Francis is probably more into his butterflies than birds these days but he has an uncanny ability to spot interesting birds, or least be in the company of people who have seen something unusual.

While I have yet to discover one rare bird on my own – what a day that will be when I do (if I ever do) – Francis was one of the first people to discover the Short-eared Owls at Papercourt a couple of years ago, and he also saw a Honey Buzzard over Ash Ranges last year. The group he was with on Pewley Downs didn't know what the Shrike was but Francis obviously did and what a cracking find it was.

It's all about putting the hours in and having a bit of luck. David Campbell, who virtually lives at Canon's Farm, had a male Hen Harrier over recently (and he rued the fact it wasn't a Montagu's!), while Steve Gale yet again had a Hawfinch in his sights in Banstead Woods this past week.

I, on the other hand, have simply traipsed over familiar territory simply to click off the usual suspects seen at this time of year. It's a ritual you have to go through to guarantee your 'list' is respectable. The problem with this ritual is it doesn't make birding particularly interesting.

There have been some highlights during the past couple of weeks. I didn't expect to see a Barn Owl while watching Woodcocks roding at Thundrey Meadows, nor a family of Raven at the western end of Denbies Vineyard.

The Nightjars at Crooksbury Common were as magical as ever last night, while this morning, with assistance from Rich Sergeant, via Rich Horton, I caught sight of my first Spotted Flycatcher of the year at Thundrey Meadows. At Frensham Little Pond I saw a number of Common Redstarts and at a breezy Thursley Common a pair of Hobby put on a spectacular display.

One bird I just can't get a sniff of, however, is a Dartford Warbler. For some reason, I haven't even heard one sing, let alone had a half-decent view of one. There were plenty at Thursley at the end of last year but on each occasion I've been back since I've drawn a blank. 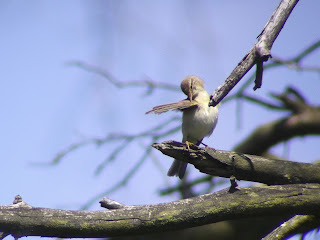 It's this listing thing again. If it wasn't for that I would simply go somewhere to enjoy the walk and if something interesting popped up that would have been great – that's exactly what happened at Denbies.

Other birds on the list that will probably stay missing this year are Sandwich Tern, Little Tern, Black Tern, Avocet, Sanderling, Crossbill and Wood Warbler. There will no doubt be others as the year progresses.

The bottom line is, I don't really care if these birds stay missing off the list. It's not as if I've never seen any of them before. If I really want to see a Little Tern I can drive down to the coast and find one easy enough. It's all a bit daft.

The week ahead should be fun, however. On Thursday night I'm heading off with the Tice's Meadow gang to Lakenheath for a days birding on Friday. I've never been before and it's unfortunate that it appears all the rare birds showing these past few weeks – the Savi's Warbler, Red-footed Falcon and, sadly, the Golden Orioles – have all left the scene.