THE RACE FOR A ROLLER

What a couple of days. As I mentioned in the previous post, birds – particularly rare ones – have a habit of cropping up at weekends and at times when I'm involved in more important matters like earning money or visiting family in hospital.

Yesterday was another example of bad timing and to add some extra spice to the mix the bird in question really was one to drop everything for to go and see.

But I couldn't. I really couldn't. I'd fleetingly seen it mentioned on Twitter yesterday afternoon – it was showing well at Broxhead Common near Bordon just over the county border in Hampshire – but I was in no position to go and view it as I was in Hitchin, Hertfordshire, visiting my father-in-law in hospital. Before Annie and I arrived we had misgivings about how things were going to pan out for him even short-term, but as it transpired he was responding well to intravenous antibiotics and was to leave hospital the following day. Amazing news.

While at the hospital, the phone rang. It was Bob Warden.
"Hello Neil?"
"Hello Bob."
"I supposed you've heard the news about the Roller?"
"Yes Bob."
"I'm looking at it right now."
"That's great mate."
"Are you otherwise tied up?"
"Yes mate."

He knew from the tone of my voice that there wasn't much I could do about it.

We left the hospital at about 5pm and went back to Annie's mum's house along with Annie's brother Alan for a cup of tea before heading home. The sun was shining, the birds were singing, everyone felt a sense of relief.

We left at 6.30pm and headed back to Redhill. The roads were really clear and we got back by 8pm. I sort of knew I was pushing it a bit but I mentioned the Roller to Annie and with still enough time to get to Broxhead Common before sunset I went for it.

The sun got lower and the light got darker but I got to the Common just before sunset and walked up the sandy path to a small group of birders. There on a dead tree stump to the south of the footpath, and only 100 metres away, was the Roller.

Before I could get my scope set up it flew off along the horizon and perched in a silver birch tree about 200 metres away where it stayed for a few minutes. Brilliant. A lifer for me, let along a British tick. It was a much larger bird in flight than I thought it would be and so striking to look at.

I had great views of this magnificent bird for a good 30 minutes before it was plenty dark enough to leave.

Before I set off back home, however, I spoke to the birder who found the Roller. Jim Smith actually saw it for the first time on Thursday evening but despite its bespoke appearance, doubt set in whether it really was a Roller.

So rather than announce his brilliant discovery only to feel foolhardy because he'd made a horrible mistake, he waited. A friend convinced him to take a chance and so he put the news out on Saturday morning.

Jim said he even kept a low-profile that morning while masses of birders arrived at the Common, feeling quite stressed so many people had turned up, but later felt a sense of relief when he spoke to someone who confirmed it was a Roller.

If I'd found a Roller on my local patch I would have made damn sure to sing it from the rooftops. I don't think the majority of people would've held back but Jim is an unassuming man and a reluctant hero.

I wasn't planning to be around the next morning but plans got shelved, so I set off early and returned to Broxhead Common. A bigger crowd had gathered and the Roller this time was sitting on a silver birch branch to the south of the path. It didn't stay long before flying across the Common and down into the valley.

After some pontificating and meandering up and down the valley, I met up with the Tice's Meadow gang and the bird was spotted in another dead tree on the horizon to the south. 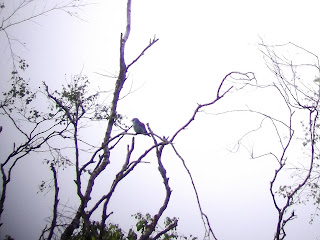 It wasn't long before it was off again back down into the valley where it was found again. Here it stayed for a while in a Rowan tree in the sunshine, showing off it's incredible turquoise, orange and black plumage. It had been quite mobile during the morning, maybe feeling threatened by this crowd of potential predators (or birders) and its mood probably wasn't helped when one birder managed to flush it out of the tree we were viewing it in. 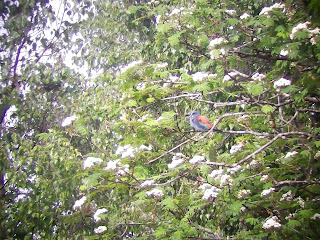 Eventually, after moving from tree to tree it took to the air and flew high over our heads and continued heading north east. It didn't look like it was intending to return.

That was it. I felt sorry for a number of birders who then arrived only to discover it had gone but obviously, from a selfish point of view, relief I'd arrived early enough to get good views of it.

Remarkably it was picked up by birder Andy Pickett, who, having discovered that the Roller had left the area, took a punt and parked up at Thursley Common where he relocated it before it set off again  heading north east. Where it has ended up, who knows, but for me this has been the bird of the year so far.

What next? Two Surrey Red-backed Shrikes – one male at London Wetland Centre and the other, a female, at Pewley Downs near Guildford would be good but both will have to wait until Tuesday at the earliest. It might be too much to ask for both to stick around until then though after the luck I've had during the past 72 hours.
Posted by Factor at 19:43