GRINDING IT OUT AT STAINES

Boy, what a week. I made three visits to Staines Reservoir with varying degrees of success. The first two were average at best – a Dunlin, Little Ringed Plover and two Little Gull were the best I could muster.

Thursday, in particular, was atrocious – the day of the 60mph winds and rain that blew through. Why I opted to spend a few hours on the causeway in that terrible weather is still a bit of a mystery to me. Adrian Luscombe and later, Ken Purdey, also braved the elements and we were rewarded with nothing apart from a lot of Common Terns. The hope had been for the odd skua or other displaced seabirds, but no. Nothing.

It has been a pretty disappointing month so far. The weather has promised much but has delivered little in recent days. It is quiet and with June approaching and the last vestiges of the spring migration coming to a close, we might have seen the best of it already.

However, June can be surprisingly good at times. Last year was a case in point with the Melodious Warbler at Leyton, the Marsh Warbler at Rainham and the Little Bittern at Rickmansworth. We also had a Common Scoter on my local patch at Holmethorpe.

Today was slightly better. Early doors I ventured over to Spynes Mere, where I had great views of a Lesser Whitethroat singing its head off out in the open and I also caught up with a Water Rail, my first of the year, skulking around the reedbed at the south-west end of Spynes Mere. 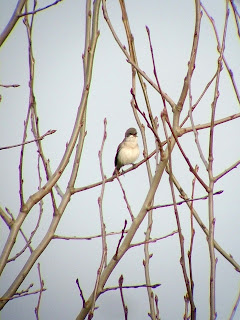 Off to Staines again, where I met up with Bob Warden, Adrian Luscombe and Simon 'Eddy' Edward amongst others. I had missed a Turnstone, which had flown off earlier, but then reappeared on the gantry on the King George VI reservoir when I went looking for it at the eastern end of the causeway.

Fortunately, it turned up again on the gantry. What also turned up 20 minutes later were three Whimbrel flying low across the north basin from the east. They circled the area, seemingly looking for a place to land, but thought better of it and headed off west.

Also seen around then were five waders flying across the south basin – they looked almost certainly to be Dunlin, which made it six in total during the morning – and a smart Arctic Tern feeding on the north basin. Also on the south basin was a Common Sandpiper and three Black-necked Grebes.

So, as it turned out, the three hours spent eventually produced some decent sightings but unless you live on the coast somewhere, finding decent birds is currently hard going.
Posted by Factor at 13:16