Good friends of ours, Charlie and Di, live in the next road to us and have, by chance, led me to a remarkable spot 20 minutes down the road from Redhill that matches Bookham Common for Nightingales.

When they are not creating things – Di is a brilliant scenic artist who has painted and created scenic work for theatre, ballet and opera, including for the Royal Opera House (visit her website to see examples of her work http://www.diarts.org.uk/), while Charlie can put his hand to anything practical on the house or car front and is a qualified electrician and a damned good one at that – they like to go out walking. Well, they like walking and also stopping off for a pint and spot of lunch. The pub features quite a bit on their walks.

They have the right idea. They don't get stressed out because they haven't added a Wood Warbler to their Surrey year list or moan because a Grasshopper Warbler wouldn't come out from the undergrowth to show itself.

The walk/pub thing sounds like a really good pastime to me, especially as on one walk recently along a footpath just north of the Surrey Oaks pub at Parkgate, near Newdigate, they heard some birdsong they didn't recognise. They couldn't see the bird in the deep scrub but Di recorded it and sent it to me by email.

Immediately the song gave it away. A Nightingale.

What a great find! And quite close to home. So late yesterday afternoon, Annie and I set off for Parkgate and walked along the footpath to an area that was remarkably similar to Bookham Common. Top-notch and untouched thick vegetation, plus plenty of Hawthorn and other bushes.


Within minutes we could hear the first Nightingale singing in the bushes to our left – it was really close but predictably we couldn't see it until it flew across us and into another small tree close by, where it continued to sing. Fantastic.

Another bird began singing to the right of the path and as we headed further north, we could hear more Nightingale singing. At one point there were at least four competing to be heard. What a great place!

At Bookham there have been at least five birds reported this spring, but I think there maybe more than the six we heard (we saw two) at Parkgate, which makes this site of specific interest and an important one for Nightingale in Surrey. 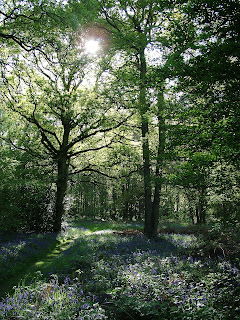 After the Nightingales we walked through the woodland at Hammond's Copse – if you have never been I can recommend it. A stunningly beautiful place with plenty of bluebells on show.
Posted by Factor at 11:11