RESCUED BY A RED-RUMPED SWALLOW

My trusty old Fujifilm Finepix S7000, a camera I've had for nearly ten years has broken. OK, so not exactly the end of the world compared to other events going on at the moment but its demise last Saturday pretty much summed up how the past week has been and last weekend in particular.

A pattern as inevitable as the sun coming up meant that I was otherwise engaged last weekend when all manner of rare and unusual birds decided to arrive in the south east. The Dusky Thrush was the bombshell. Like most people, I didn't know about it until the following morning, but by then I was on the M4 heading in the other direction.

To make matters worse the bird, the first twitchable Dusky Thrush since 1959 (the year I was born),  turned up at Margate Cemetery, just ten minutes away from where my parents live. Everyone who is anyone (apart from Steve Gale) went for the Thrush. Even Lee Dingain diverted his attention from Staines Moor to go and see it.

Most people also took in the Montagu's Harrier at Reculver on the return journey (another lifer for me), while those nearer to home who chose not to make the trip were rewarded with a Black Tern, three Sanderlings and a Greenshank at Staines Reservoir and a Temminck's Stint at Tice's Meadow. On Sunday the third Avocet of the year popped up at Holmethorpe – the third in a row I have missed.

All these birds have the extraordinary ability to appear on weekends. Why is that? I know us humans live for the weekend, but I had no idea birds did too. They seem to move more on Friday nights/Saturday mornings. It is uncanny how often that happens.

My only hope was that some of these would stick until at least Monday, but predictably they didn't. What slim chance I had, evaporated. I tried to make the most of it during the week with the odd trip out, but it was a dead as a Dodo. Three Black-necked Grebes, one Dunlin, two Little Ringed Plovers and two Arctic Terns managed to keep me interested. 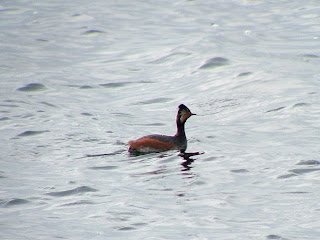 Until yesterday, that is. At last I was in a position, albeit late in the day, to twitch a rarity in Surrey. Dodge posted it on Twitter in the morning. A Red-rumped Swallow was feeding on the main lake at Beddington. It was their second Red-rumped in a month. Remarkable. It was also one of three Red-rumped Swallows in the south east seen during the day – the other two were at Weir Wood Reservoir near Forest Row and Dungeness.


I had a stack of work during the morning and into the afternoon but I was able to sneak out before 4pm and head off to Beddington.

A number of people had been and gone during the afternoon but fortunately the Swallow was still there. Peter Alfrey was at the far end of the main lake and the Red-rumped Swallow flew up to about three metres in front of him as I approached. 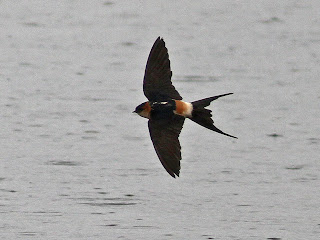 It was happily feeding with a group of Barn Swallows low over the lake and although the rain was coming down, it stood out well. It was noticeable that this bird had two white marks on its back – probably due to a moult.

My new, cheap camera isn't up to scratch taking photos of moving objects, so I have used a couple of Peter's excellent images from his blog (http://peteralfreybirdingnotebook.blogspot.co.uk/2013/05/red-rumped-swallow.html). Also worth reading is his important post about the Beddington incinerator http://peteralfreybirdingnotebook.blogspot.co.uk/2013/05/tell-boris.html

It's been a strange few weeks. This spring has been like no other. Some areas have had some really good birds show up whereas other sites, usually very good at this time of year, have drawn a blank. Canon's Farm, for example, has had few decent birds drop in since the Whimbrel last month. It is almost guaranteed to have a Black Redstart or two during the spring, as well as the odd Grasshopper Warbler, and it has had neither. Whereas Holmethorpe has had at least two Black Redstarts this spring, plus a Little Gull and Arctic Tern – two unusual birds for the site.

Strangley however, while the Red-rumped Swallows turn up at Beddington, not one has been seen at Holmethorpe despite the hundreds of hirundines it has feeding over the lakes every day. There's still time yet though.
Posted by Factor at 10:40