IN SEARCH OF THE BEDDINGTON ICELAND GULL

Birding in January around Surrey is often one of the better months for decent birds. It's also when everyone is full of hope and optimism and begin their year lists once again. The Glossy Ibis at Frensham last week was a great start to the year.

My first visit to Staines Reservoir for quite a few months on Sunday gave me the chance to meet up with Captain Bob and Adrian Luscombe, who I hadn't seen for sometime, but Simon Edward, who I'd been hoping to catch up with, had been to the Res the day before.

Plenty of birders about, including a Surrey Bird Club trip, led by Kev Duncan, and plenty of decent birds to see, although most were quite distant. The headliner was a Slavonian Grebe on the far western edge of the north basin, keeping company with some Tufted Ducks. The other highlights were a Scaup, Pintail and three Black-necked Grebe, although I only saw one of these.

A pleasant trip but as I left the weather began to close in and the wind had picked up.

A couple of days earlier a former Racing Post mate, Francis Kelly, had relocated what must be a long-staying Great Grey Shrike at Papercourt Meadows, having first been found in October by Matt Phelps.

It was a long shot but I thought I'd give it a go, wading through the mud and soggy ground, but predictably not a thing. Not too much around apart from three Stonechat and an excitable flock of Siskin perched up in the trees near the car park close by Newark Mill Bridge.

Today was another sunny start and Beddington was the venue. Beddington in winter is a prime site for gulls. I've seen Glaucous Gulls for the past two years in a row there, and Iceland Gulls are regular visitors, and it was an Iceland Gull that had been present on and off for a number of weeks I had come to see.

The problem is I'm rubbish at gull id and with thousands of gulls to sift through on the landfill, and a bird that looks very similar to plenty of other juvenile gulls, it was going to be tough.

Fortunately I arrived just at the same time local Beddington birder, Frank Prater, was planning to walk along the footpath to get a better view. If anyone can find a gull-type needle in a haystack, it is Frank. 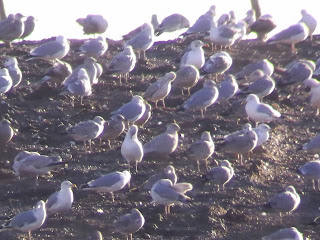 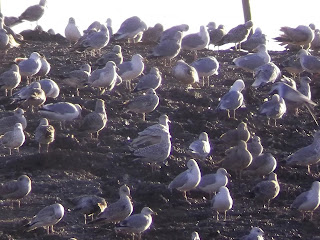 He didn't disappoint. It took a bit of time but Frank found the Iceland Gull as it stood for a few minutes preening itself in among the carpet of gulls. Looking at it you could tell the difference quite distinctly but simply by scanning the area it easily merged in with the rest. I had been fortunate. As for locating a Caspian Gull, forget it.

A walk around 100 Acre and the silt beds didn't produce as much as I'd hoped. A couple of Shelduck and two Water Pipit, which I heard as they took flight but couldn't see through the glare of the sun.

Back at the hide I waited successfully to see a couple of Tree Sparrow. These Sparrows are less in number than previous years which is a bit of a worry.

Despite obvious historic reservations, I drove home via Banstead Golf Course, where I predictably dipped the Firecrests again...  tiresome. I've come to the conclusion that years of watching loud motorsport has affected my hearing so that high-pitched sounds are inaudible to me. Didn't hear a thing.

So what next? I reckon the Two-barred Crossbill at Leith Hill is still about somewhere. Just need a few hours to try and find it. At least I can hear that.
Posted by Factor at 21:34