I managed a couple of half-day trips out during the week, both of which began on Leith Hill in search of the female Two-barred Crossbill.

Weather dictates whether this rare Crossbill makes an appearance or not. Wet weather means it goes missing, but during a dry spell there's half a chance it will appear up in the pines close to Coldhardbour cricket pitch.

It's been wet most of the winter, so sightings had ground to a halt for a number of weeks until a fortnight ago. Sam Bayley had a brief view of it with a flock of about 20 Common Crossbills on February 16 (he also saw a Rough-legged Buzzard) and another on February 26. These sightings were after a few days without rain.

What's the significance? When it's dry, the one guaranteed spot where the Crossbills fly to for a drink is a pool behind the cricket pitch. When it rains, large puddles of water can appear anywhere over the large expanse of the Hill, so the Two-barred is less likely to turn up.

I went up on Thursday afternoon – the sun was out – but it had rained overnight and storm clouds were gathering. A group of six Crossbill eventually flew into the trees close by on the heathland, but that was it.

I do enjoy it up on Leith Hill, though. It's a great spot for Siskin – there were plenty flying to the feeders set up by the wardens. A flock of about 20 Lesser Redpoll also flew in at one point, before flying off again when a Kestrel appeared. Three Buzzard drifted over, followed a short while later by a Red Kite, while a Tawny Owl called out from the woods.

I went back on Saturday lunchtime, but once again the Two-barred kept away. A quiet afternoon, apart from a Raven calling in the distance. I met up with David Campbell and Ian Jones and after an hour or so Ian and I set off for Thursley Common.

The hope here was to see a Hen Harrier on the Common. A male had been seen in the late afternoon during the week. It was always going to be a longshot, as you have to be in the right place at the right time – which, in my case, has yet to happen!

We walked over to the area where it might appear, at the same time listening out for Dartford Warbler, but we didn't even hear, let alone see, one in all the time we were there.

One of the breeding Curlew flew over, and we saw plenty of Stonechat, but no Harrier or Dartford Warbler.

A bit disheartening. Having already spotted the Great Grey Shrike in the distance perched up on a dead birch on Shrike Hill when we first arrived, we decided to go for a closer look on our walk back to the car park. It didn't disappoint. As the sun dipped lower in the sky and light began to fade, we found the Shrike sitting quietly, preening itself high up on a dead pine tree. 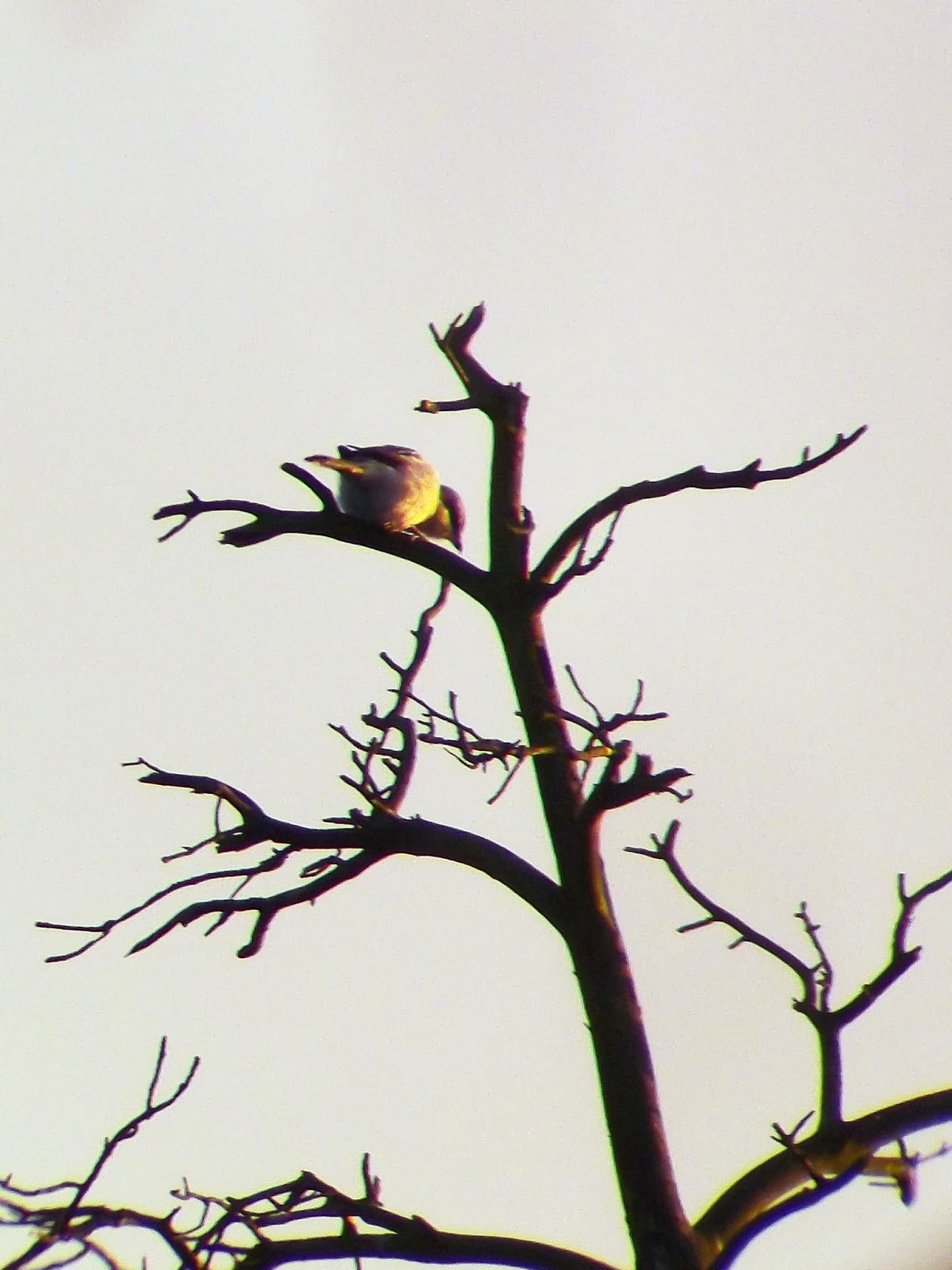 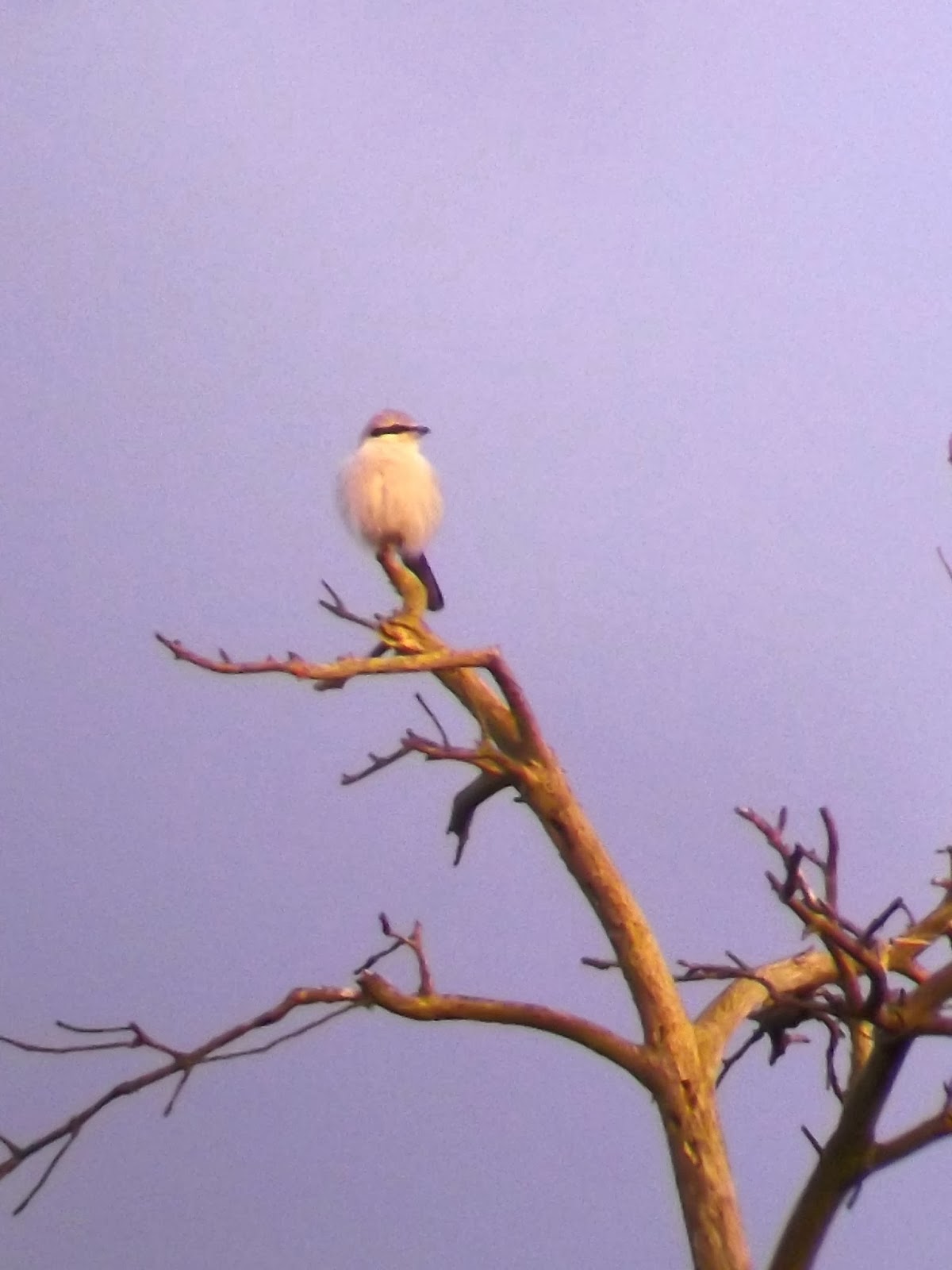 It was settled and stayed put for a good ten minutes before a Crow forced it to fly further onto the hill. Seeing the Shrike made up for what had been a bit of a disappointing afternoon.
Posted by Factor at 12:07