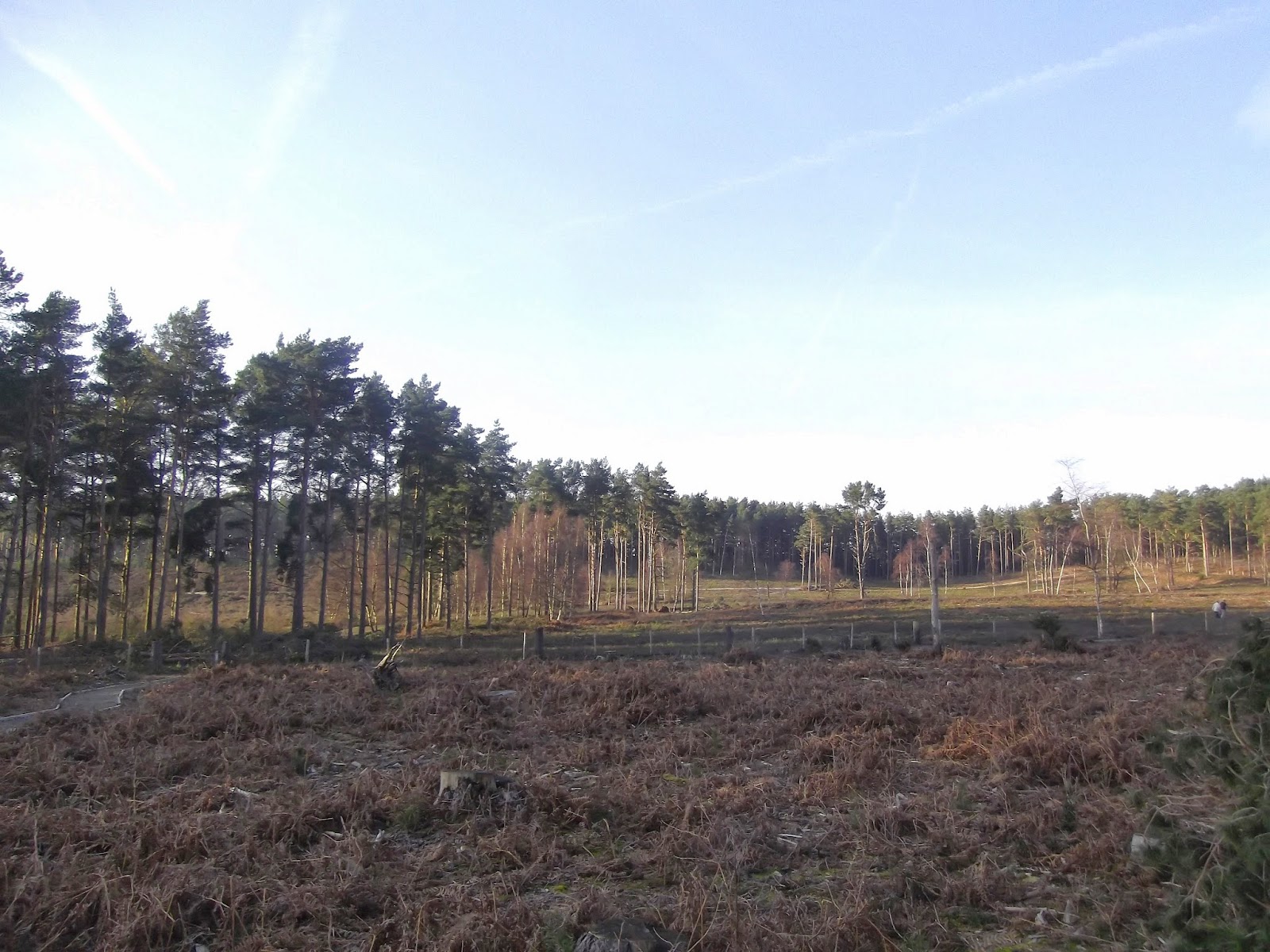 There's been much debate recently about a probable Two-barred Crossbill seen at Farnham Heath RSPB Nature Reserve this week.

The bird appeared for the first time on Monday but wasn't signed off as an bona fide Two-barred in some quarters. Notably, Dave Harris, of Surrey Bird Club, was reluctant to announce it was the real deal, suggesting it might be a winged-barred Crossbill - a Common Crossbill with bars on its wings.

Having looked at the few photos that had been banded around, it looked like the real thing to me, but who am I to judge?

The Tices Meadow gang went for a look-see on Wednesday and they firmly believed it to be a Two-barred. The clincher would have been to hear it calling, as the Two-barred Crossbill has a distinctively plaintive, more feeble call than the metallic sound of its more common relative. Unfortunately, no-one had actually heard it.

I decided to go for a look myself on Thursday afternoon – basically I was skiving off. It had been a busy week – I'd put together a 12-page Cheltenham Festival pull-out the day before at the Daily Star, which was good fun, as opposed to the 12-page Irish point-to-point pull-out at the Racing Post the day before, which was bloody hard going.

It must have been one of the warmest days of the year on Thursday – a tad hazy, but hardly a breath of wind. Perfect.

I'd never been to Farnham Heath before, and I'm not really sure why it hadn't been on my radar until now as it is a very good spot.

It's a compact reserve, in the same way Crooksbury Common is, but flatter. There were plenty of Woodlark around, a pair of Stonechat and, pleasingly, a male Dartford Warbler, that flew over my head and landed on a nearby bush singing its heart out.

At this stage I'd seen a couple of Common Crossbill, but no Two-barred. It wasn't looking good. One birder had been at Farnham since 10.00am and had yet to see it.

With the sun in the west I opted to walk away from the small group of pine trees where the bird had mostly been seen and walked along the path towards the car park to the west of the reserve where I'd spotted a couple of Crossbill had flown towards and had settle in some pines.

It was then I spotted a lone silent Crossbill flying back across the reserve towards the popular area for sightings. It landed high up on a pine, clearly visible. A quick look through the scope... and there it was, the Two-barred Crossbill, showing fantastically well in the sun. And then it dropped down out of sight.

I couldn't locate it again for a good 30 minutes but noticed a few birders had gathered some distance away looking up into the pines near where I was standing. I saw movement and then picked up the bird again, perched high up in the trees. 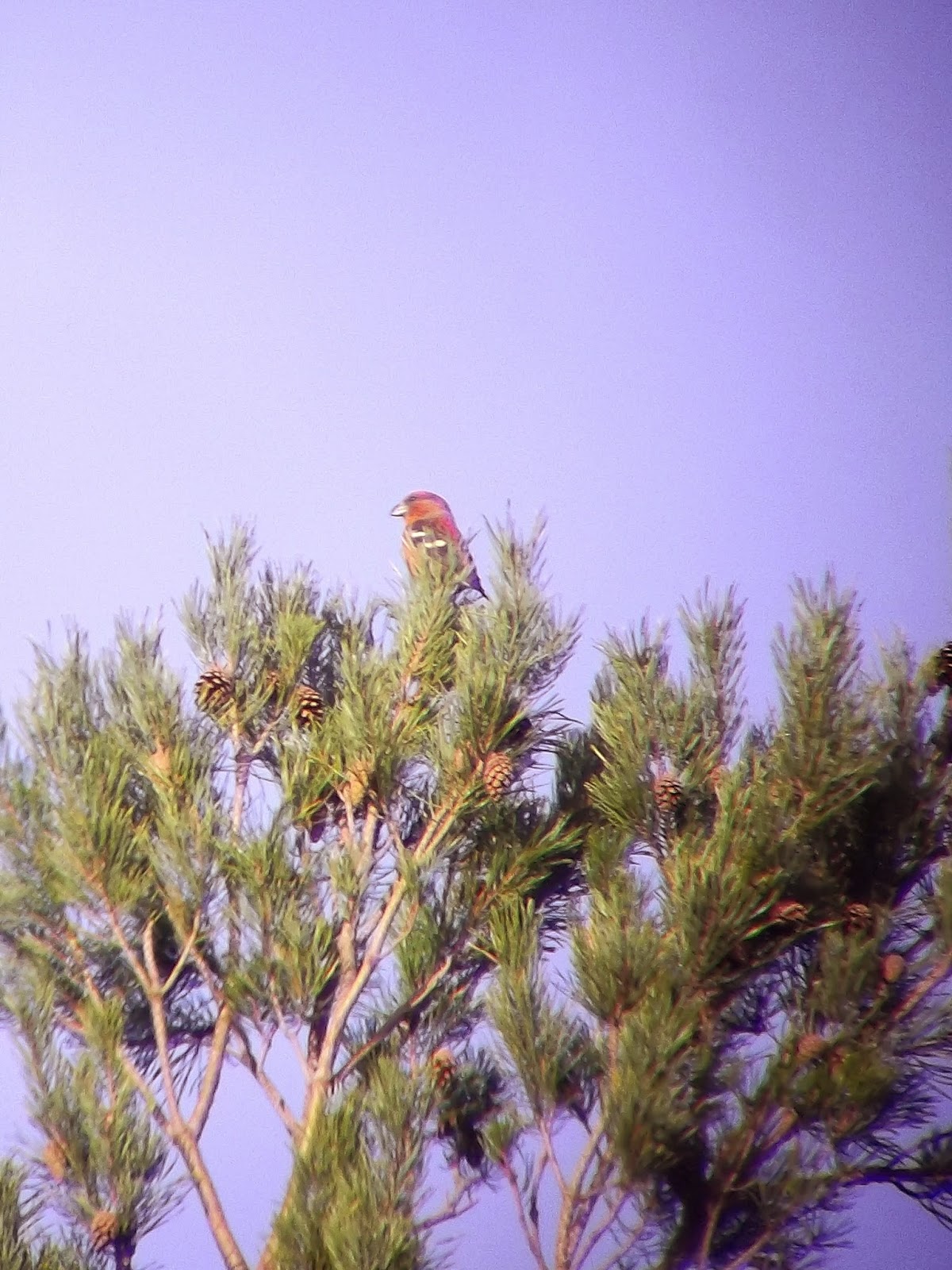 There it stayed for a good ten minutes or more, preening itself in the warm sunshine. You couldn't really ask for more than that - and the white wingbars were cleary on show. 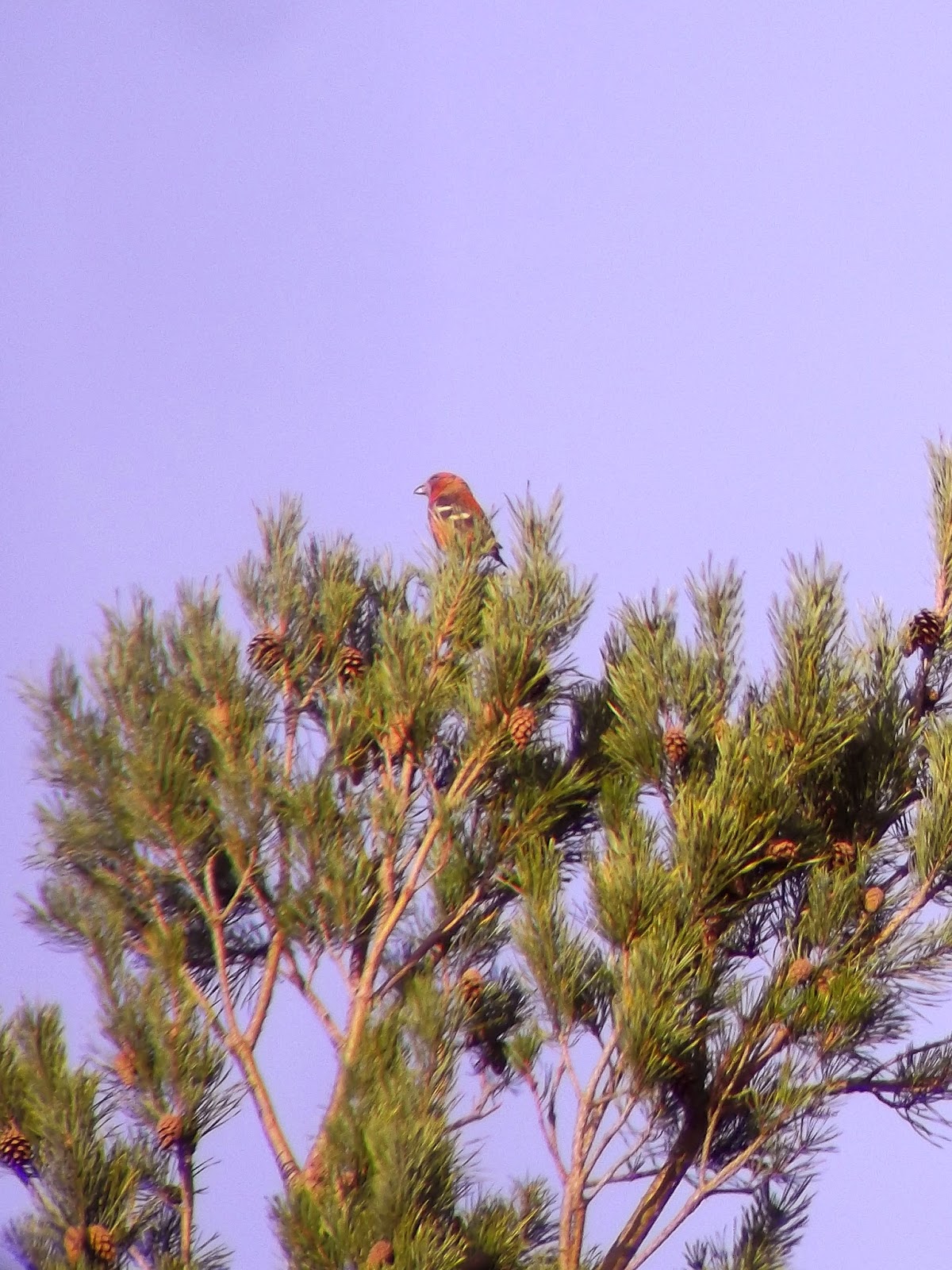 Most birders now believe it to be a 1st-winter male Two-barred Crossbill and another fantastic bird for Surrey this year. 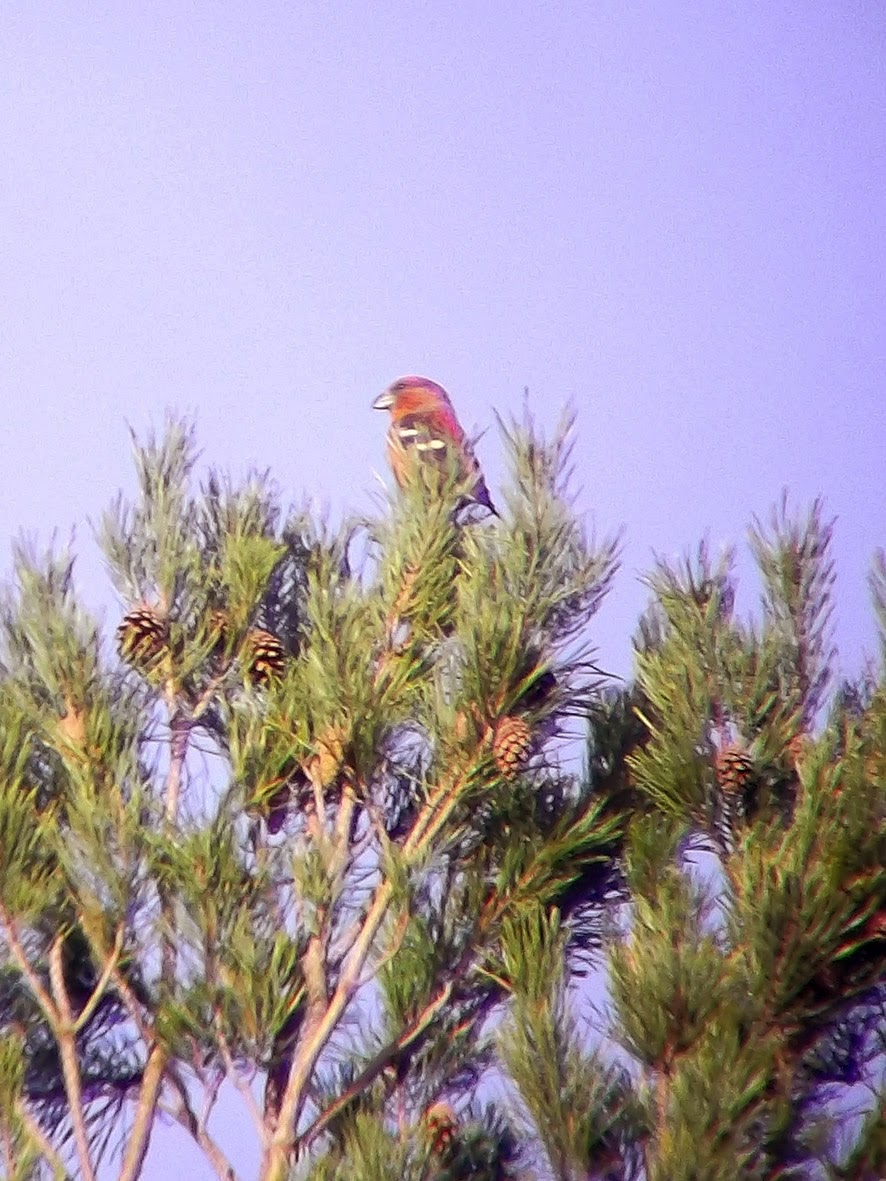 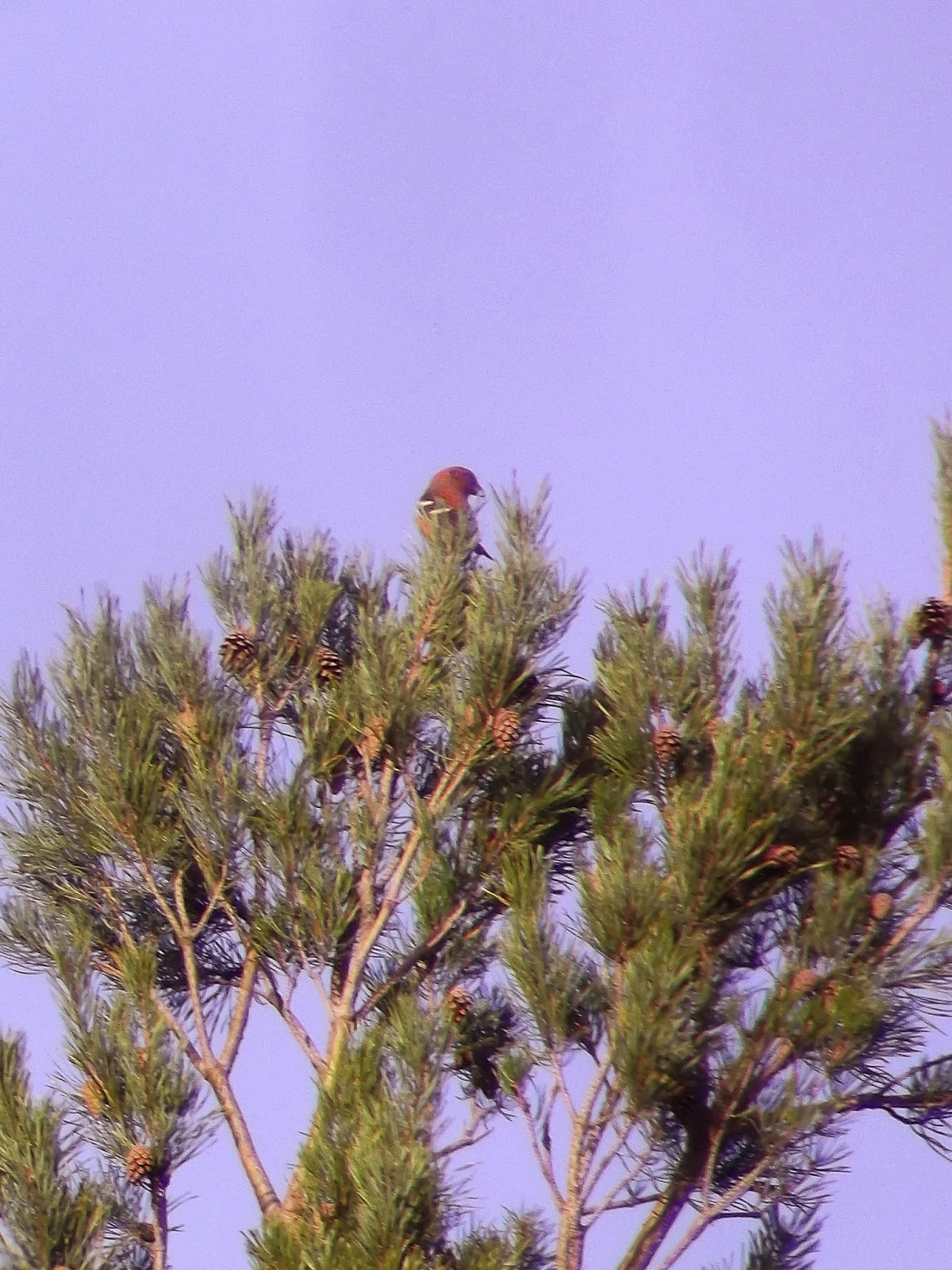 Walking back to the car park I'd left my binoculars on the heath and had to go back for them. On the way I was startled by a Woodcock I had accidently flushed - another unexpected find.

After an unsatisfactory and unenjoyable past few weeks on the birding front - I was even considering taking some time away from it and focus on something else, like a second F1 stock car book I'm intending to write - it was uplifting to have some positive news for once. I don't imagine it will last but I'll take it when it happens.
Posted by Factor at 08:31