IN SEARCH OF A SURF SCOTER

As I've mentioned before, I enjoy winter birding as it means I can catch up with a few scarcities I haven't seen before.

It has so far been quite a successful 2015 in that regard but I came down with a crashing dip a couple of weeks ago in Essex, trying to find the Surf Scoter in the Stour Estuary at Wrabness. This juvenile had been around for a while but can be notoriously difficult to find as it's often quite distant.

Sometimes it's best to view from the Suffolk side of the estuary at Sutton Point and other times the Essex side. I chose the Essex side, and spent a good few hours there only to dip.

Despite that it was a pleasant enough Saturday afternoon, with plenty of wildfowl and waders to keep me interested, including a pair of Pintail, plenty of Oystercatcher, Dunlin and Redshank, a couple of Knot, a pair of Red-breasted Merganser and a Grey Plover. But it was still a long way to go to draw a blank.

And, as is typical with twitching, a few days later another Surf Scoter turned up off the Hampshire coast at Gosport, and this one, a fully-grown drake, was keeping company with a pair of Common Scoter.

Prior to visiting the coast last Sunday, I caught up with the Great Grey Shrike at Thursley Common. I found it easily enough perched high up on a dead birch to the east side of Shrike Hill. I stayed quite late in the hope of catching up with the ringtail Hen Harrier that many had seen recently, but equally typically it was a no-show. 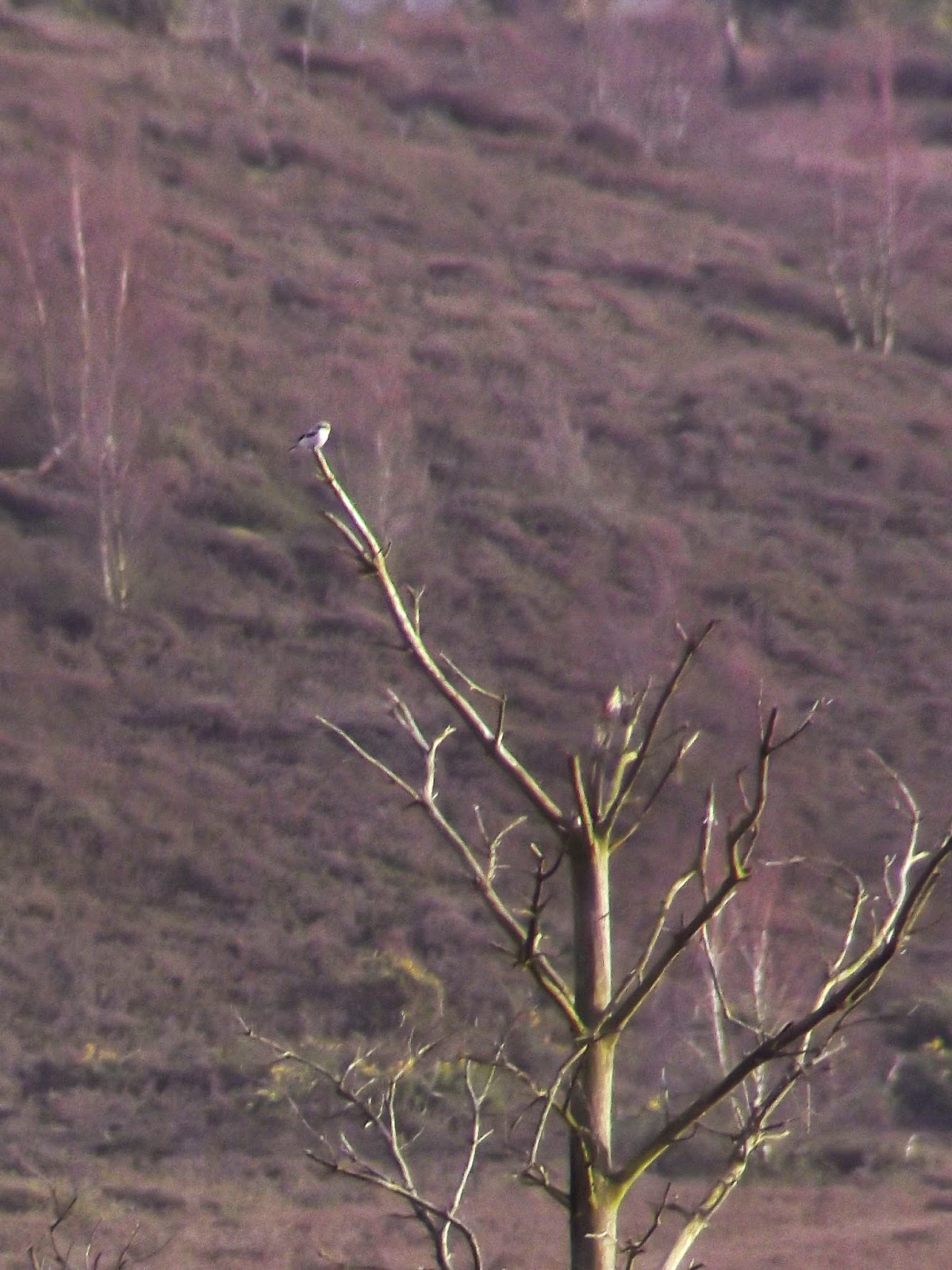 I've visited Thursley many times over the past few years and yet despite Hen Harrier being a regular winter sighting in recent times, I have never managed to see one there. A few years back when with a group of birders I recorded I'd seen a Hen Harrier fly over – one of the group was adamant it was one – but I wasn't totally convinced at the time (you get carried away by other people's conviction when you're not confident enough to dispute the call) and now I'm almost certain it wasn't and was simply a Common Buzzard lazily drifting overhead.

Hopefully, I'll catch up with the Harrier before long.

So, last Sunday morning I trekked down to Gosport and Stokes Bay. It was a very straight-forward journey, and within about a minute of arriving I was already watching the Surf Scoter. It just happens that way sometimes.

The Scoter was bobbing up and down on a choppy sea with its Common Scoter counterparts, and all three disappeared occasionally as they dived for food. 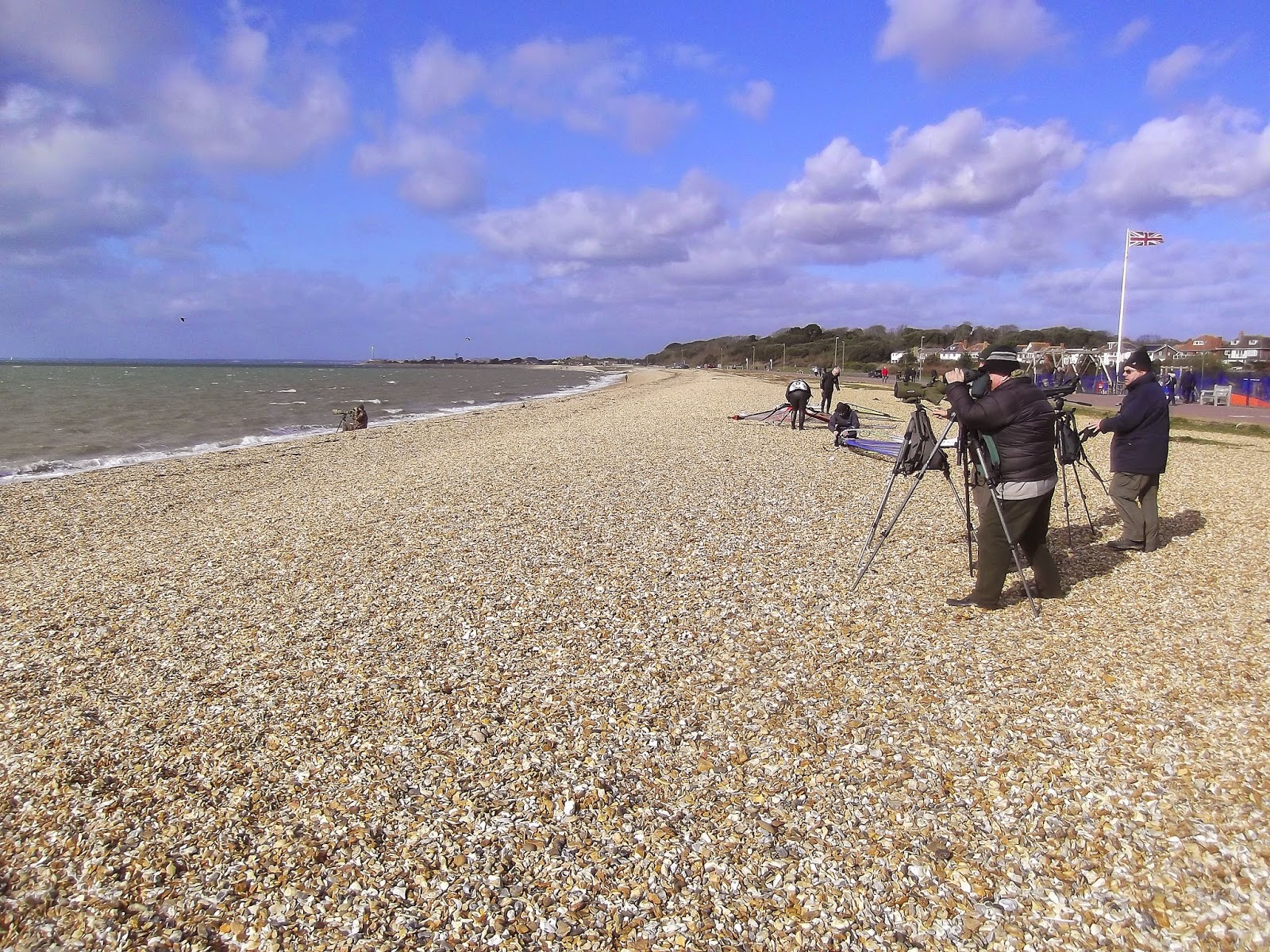 They gradually drifted off to the east so a short drive to the car park close to the Pebbles Fish and Wine Bar near the local sailing club and the short walk to the beach and even better views were had, albeit with eyes streaming from the brisk, cold wind blowing off the sea.

There were plenty of interested passers-by, many of whom stopped for a chat. While this was fine at first, I was aware I was spending more time explaining what I was looking at, rather than actually looking at it.

The conversation would begin thus:

"Excuse me, can I ask what you are all looking at?"

"Yes, of course. It's a bird called a Surf Scoter."

"Yes, quite rare. It has come all the way from America."

"Oh really. What is it doing here?"

"We get a small number most years. They occasionally winter here. Would you like to have a look through my scope."

Then after the tenth person has asked the first question the conversation goes like this:

"Excuse me, can I ask what you are all looking at?"

"Forgive me for being cheeky, but may I have a look?"

"Actually, I've lost sight of it at the moment. Maybe if you come back later."

Eventually the Scoters moved further along the coastline, having been disturbed by windsurfers, so I drove the short hop to Walpole Lake to see the wintering Ring-billed Gull everyone knows as Waldo. Waldo has been a feature of the lake since he first wintered there in 2003. He's a bit of a celebrity.

Unfortunately I timed my visit for when the tide was out on Hasler Creek. I scanned the mud but there was no sign and he also wasn't interested in venturing inland during the couple of hours I was there. Another time perhaps.
Posted by Factor at 11:19