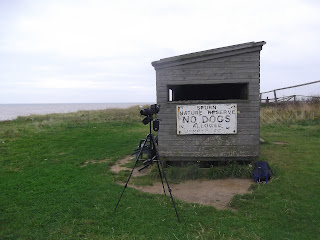 It had been two years since my last visit to Spurn and I'd been counting down the days to my three days there last weekend. But more of that shortly.

Prior to traveling to this remarkable birding area I spent Saturday night watching the Brisca F1 World Stock Car Final, my annual pilgrimage to this fantastic event, hosted this year at Kings Lynn.

It turned out to be a strange and very late evening. The meeting began OK and was running to plan until the World Final race itself – the fourth of the night on the 11-race programme – which started at 7.45pm. It was a 25-lap race around the quarter-mile shale oval, which would normally take about 10-15 minutes – but it didn't end until nearly 10.30pm...

The race had to be completely restarted after two laps, which took half an hour, but the race had to be stopped with ten laps to go due to a serious injury to one of the drivers. The throttle stuck open in his car and hit other stranded cars that had spun in front of him at full chat. The force of the impact caused a dislocated knee, and his knee-cap split in two. Horrible.

The result of this was a 90-minute delay as ambulances and a fire engine were brought on to the circuit. Later during the meeting another ambulance was needed for an injury to a marshal on the centre green and in the final race of the night, a tractor on the centre green was hit by a car after the driver was knocked unconscious. What could go wrong, went wrong on Saturday night.

The meeting finished just before midnight. A good two hours later than is normal, and I didn't get to the Travelodge I was staying at in Peterborough until 1.30am. In bed just after 2.00am, there was no chance of getting up early that morning to head for Spurn, another two and a half hours up the road. I was completely knackered.

I didn't get going in the morning until about 9.00am, and I lived to regret the late start.

An hour out of Spurn, a message popped up on the Rare Bird Alert website that a Golden Oriole had been seen at the Driftwood Caravan site just after 11.00am. Fantastic!

It relocated to a tree at Westmere Farm, which was next door to the Westmere Farm Bed and Breakfast I was staying at for two nights, but by the time I got there, staring at the tree with a number of other birders, the Oriole had disappeared from view, never to be seen again...

It was not a good start, but it was sure to pick up.

I love this place. Spurn is geared up for birding. Kilnsea is the local village and birds are the main tourist attraction. The Westmere B&B is a great place to stay with excellent breakfasts and the owners cater predominantly for visiting birders. Great value, anyone who plans to stay in the area should make a b-line for Sue and Andrew Wells' excellent hospitality. Visit http://www.westmerefarm.co.uk for more details. A word of advise, though – book well in advance.

Spurn is a compact site (apart from the walk to Spurn Point and back, which is about eight miles) with all manner of habitats for migrating birds to drop into. Only the day before the earliest-recorded Spurn Bewick's Swan flew in to the Kilnsea Wetlands Nature Reserve and stayed for the duration of my visit.

On my first day, I had a good look round the area but didn't really come up with much, apart from the Bewick's Swan at the Wetlands, and also a few Mediterranean Gull, plus a Wheatear and a Whinchat near the seawatching hide. On a walk towards the Point where the tidal surge in December of 2103 caused the Point to be breached, I bumped into a couple of birders who had seen the Golden Oriole. One of the guys wasn't that experience and he got the best views of it, although at the time he didn't know what it was! He told me another birder they had spoken to had been to 'Sammy's Point' – further east along the Humber Estuary – and had seen a Long-eared Owl close up. It appeared I'd missed quite a lot on this first day...

Later in the afternoon I got talking to a family from Leeds looking out to sea near the Bluebell Cafe and discovered that the grandparent of the group was staying at the same B&B as me for a few days. He had enjoyed great views of a pair of Merlin causing havoc among the waders on the Estuary and also a pair of Bonxies flying upstream. All I'd managed was a Hobby that had flown in off the sea chasing Mipits. John Ward would be my birding companion for the next two days.

At the end of day one the sun dropped down over the Humber Estuary and I headed for the Crown and Anchor pub for a pint or two of Timothy Taylor Landlord and fresh, locally-caught battered haddock and chips.

It was at the pub where I bumped into John, the two birders I saw near the breach and also top local birder Steve Exley, who was on a night out with his wife and friends. Steve remembered me from my trip two years ago and I got chatting about what to expect over the next couple of days. He didn't think we'd see anything rare (he was, unfortunately, proved right), but it would be worth some autumnal vis-migging from 'Numpties', an area next to the seawatch hide close to the Spurn Bird Observatory.

At Spurn anything can happen at any time.

Steve described one year when 120,000 exhausted Goldcrest made landfall at Spurn during one memorable day. "They were strewn like a carpet all over the road," he said. "You could pick them up. One bloke, Chris Newson, he's really tall, was walking up the path and birds were flying in off the sea and trying to get into the pockets of his trenchcoat. It was incredible."

Spurn has many stories like that. Migration doesn't come any better than the best-recorded birding area in the country.

I couldn't wait for the next morning.

The weather forecast wasn't good. Heavy rain from 10.00am onwards. I headed for the seawatch hide at 6.45am where Ian Whitehouse, from Dudley, who I met on my last trip to Spurn and one of the mainstays of the Spurn birding group, and Steve were already counting Meadow Pipits and other migrants coming in off the sea.

John Ward was already looking out to sea for potential birding highlights but treats were few and far between. Apart from Red-throated Diver, Razorbill, Common Scoter, Teal and Wigeon, there was little else to get the pulses racing. A Marsh Harrier flew out to sea, which was a nice distraction but not one Skua or Shearwater appeared during the morning before the rain duly arrived. By then the visibility wasn't great, so after breakfast we headed for the Wetlands.

Here the Bewick's Swan showed well, plus a few Mediterranean Gull, a Black-tailed Godwit, and a couple of Knot. The rain kept tumbling down for the next hour or so, so then we opted to go back to the seawatch hide. It wasn't worth going for a walk in the rain. 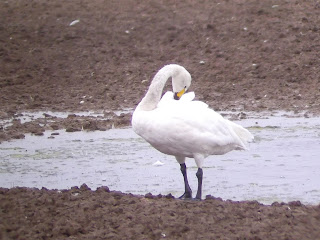 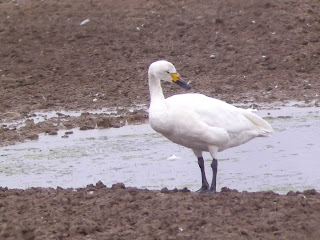 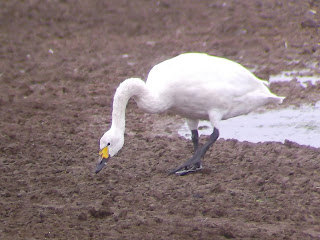 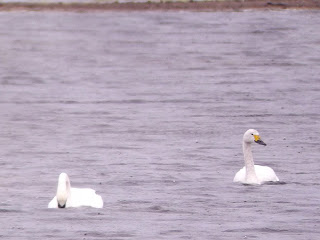 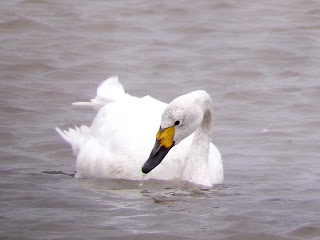 Back at the hide we met up with Ian and Leeds-based Rob Hopson, another Spurn regular. Rob is one of those Yorkshiremen who's humour is as dry as dust. He comes across as a miserable sod (because he is, but he's all the more funny because of it!) but I enjoyed his company. The seawatching was dire. John and I saw a group of three Skuas but they were far out and hard to id. John thought they were Poms, but I wasn't so sure. Highlight was a Brent Goose and a couple of Whinchat. As before there were plenty of Red-throated Divers.

The rich-coloured female effortlessly cruised around the area before heading off north-west. What a bird! Spurn had delivered just in time.

We met up again later as the sun came out creating a brilliant sunset. 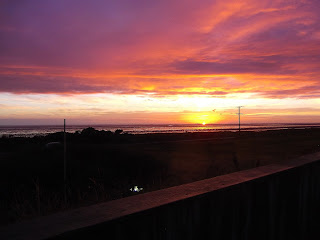 We discussed what may happen the following day. Ian suggested if the winds changed to northerlies, it could create classic seawatching conditions for Sooty Shearwaters and Skuas.

"So we could have classic conditions?' I suggested.

"Well, maybe not classic, but quite good," Ian replied.

"You'll get what you're given!" Rob said bluntly.

He was right, of course. And we got bugger all.

The following morning was glorious. A beautiful sunrise over the North Sea.

As the day progressed the wind did indeed turned to northerlies, but there was very little happening out at sea.

It was a very quiet and disappointing day. It was great to be out in the sunshine by the sea but there was little movement. Over at the seawatch hide, the Pipits kept on coming as did a few Lesser Redpoll, a couple of Yellow Wagtail. Tree Sparrows chirped happily as they feasted from the nearby feeders.

There was little banter as a couple of Sparrowhawk quietly hawked the area where the birding nets were. One swooped into the bushes. Rob broke the ice. "Something is about to die," he said cheerily.

I opted to go to Sammy's Point to see if the Long-eared Owl was still about. A longshot. It was very quiet, apart from a Peregrine hunting over the fields. I found out later that John had seen a Short-eared Owl flying down the Estuary. I hadn't seen it. Another decent bird missed.

It was basically very quiet, but I enjoyed the walk.

Later in the day I put in a stint of seawatching but it was just the usual fare. Ian went for a walk around the Triangle and discovered four Bearded Tit, but as the wind picked up they went to ground and were not seen again. Another dip.

Further south, in Norfolk, a Desert Wheatear showed up, but better still, Britain's first Arcadian Flycatcher made an appearance at Dungeness. We could only imagine the excitement!

After that it was really time to draw stumps on the day and the visit. A last pint of Landlord and a home-made Lasagne with John and then I was then heading home, arriving back in Redhill five and a half hours later.

From what I've just written, you could say it wasn't the most satisfying of trips, but in reality I met some great people and while the birding wasn't as good as it could have been, the banter and comeraderie was first-class.

Spurn is a unique place that will draw me back again next year without a doubt.

Predictably, the rare migrants turned up after I had left. It is now the following Sunday and 19 Yellow-browed Warbler, a Red-breasted Flycatcher, a Barred Warbler and, to top the lot, an Arctic Warbler were all seen during the day.

As I mentioned earlier, anything can happen at anytime at Spurn.
Posted by Factor at 22:48