Having failed to connect with the Barred Warbler at Staines Moor on Saturday evening I felt certain this eastern European migrant – a first for west London and certainly a first for Staines Moor and a well-deserved discovery by Lee Dingain – would have departed overnight with clear skies and light winds.

But no, it was still doing its thing, feeding among the bushes on the north side of the River Colne this morning. Fortunately, I'd managed to get a job finished by late morning at home and had time to belt up the M25 to Staines to go for a second attempt this lunchtime.

I met a couple of birders, including a chap called Jonathan Cook from north London. While we waited a small group of Siskin flew by, a Sparrowhawk drifted overhead, and also a Hobby and pair Kestrel patrolled the area. Nearby a couple of Whinchat darted from perch to perch.

The warbler had been seen three times during the previous couple of hours but it had been 20 minutes since it had last appeared. Jonathan walked around the other side of the large bush so we had two pairs of eyes looking out for it and, luck would have it, he soon relocated it. 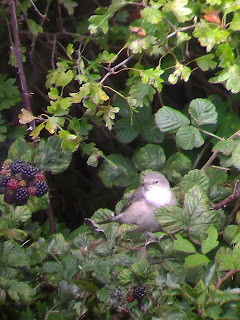 This Barred Warbler is only my second ever – the first being seen in hand at Portland Bill four years ago after it had been caught in nets overnight. It was a relief to find it far more co-operative compared to the no-show on Saturday. And it didn't seem to mind the many cows and horses grazing close to its favourite spot. A really nice bird. 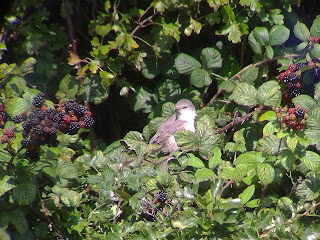 It was a good twitch and also an opportunity to catch up with Dominic Pia, who I hadn't seen for a good few months. After a bit of a catch-up I headed back home.

I had opted to park to the south of the Moor and walk along the river, rather than down from the Hithermoor Road end, basically because I thought it would make a change. I'm glad I did.

While walking back I happened to look skywards, just on the off-chance of seeing a decent raptor. Earlier that morning the guys at Beddington had seen a Honey Buzzard drift south, followed by a Marsh Harrier flying west.

I discovered later an Osprey was seen over Homethorpe by Ray Baker at 12.30, just half an hour before I was due to leave for Staines. Just a couple of minutes away by car! Then later another Osprey flew over Chobham Common.

With favourable light winds, a raptor watch was on the cards.

Immediately two large birds caught my eye, circling above. One was definitely a Buzzard, but which sort? The other was more interesting as its silhouette immediately struck me as that a harrier. It was very dark, slightly smaller than the Buzzard (which I was hoping would turn out to be a Honey Buzzard, but I couldn't transform it), which it occasionally mobbed.

As the harrier circled it became apparent it was almost certainly a Marsh Harrier! I watched it for a while, as it eventually circled and drifted off to the north. I tried to take a photo but the camera I have is utterly useless and the image below is the best I could come up with (and is heavily cropped).

Fantastic! Marsh Harriers are a rarity in Surrey, so to see this one out of the blue was a real thrill. It eventually drifted north.

I was mindful Dom was still in the area but I don't have his phone number. I'd hoped he'd seen it, but after sending him a tweet he confirmed he'd focused more on looking at the bushes for passerines rather than looking upwards.

Before leaving the Moor I finally saw at least 100 Goldfinch flying around the area as a flock – quite a sight. An enjoyable couple of hours!

The next few days look really promising with easterly winds liable to coax some really interesting migrant birds to our shores. If I can force myself out of bed early tomorrow morning I might head off to see what's out there.
Posted by Factor at 22:40