TAKING THE PLUNGE TO DUNGE - PARTS 1 AND 2

Curiously, while I spend quite a bit of time visiting the coast when birding, Dungeness has pretty much stayed off my radar.

Like I've mentioned numerous times, I don't have 30 years of birding experience behind me despite my age – in fact I only really got going in 2008, even though it feels longer than that.

During that time I have only been to Dungeness once, and that was about seven years ago. Why? I haven't the foggiest, to be honest. The only reason I can come up with is that, at the time, it felt like a long way to go from Redhill and that I'd have to make a concerted effort to get there (even though I've gone to places much further away for a day trip).

Having read Steve Gale's blog and his love affair with the shingled region, and also considering Dungeness has some very interesting birds to see at the moment, notably a Long-eared Owl and Penduline Tit, I thought I'd give it a go.

What surprised me first of all was the SatNav revealed the time to get down there was very reasonable – an hour and 20 minutes. I  took a day off Thursday of last week and took the plunge.

As it transpired, taking the plunge was almost literally what I did. Setting off at 6.30am, the weather on the drive down in the dark to Dungeness was bloody awful. Driving rain and strong winds, with standing water on the M20 – driving conditions were dangerous.

I felt a bit duped – where did this weather come from? I'd followed the forecast for a few days and it never predicted it would be like this?

If it was a bit blowy on the drive down, once at Dungeness the wind was unbelievably strong. I had a quick look around the entrance to the reserve and saw a Great White Egret straight away.

The rain came down stronger and the wind picked up even more.

There was nothing for it – I headed to the beach, using Steve Gale's very helpful directions. Down by the fishing huts I parked up. My car quivered and rocked in the buffeting wind. The rain was horizontal, and yet in the distance I could pick out two figures down by the seafront, protecting themselves from this apocalyptic weather using a large fishing boat as a wind break.

They must have been nuts.

Eventually, the rain ceased and I made a bid for this boat. Once there I introduced myself. I met Martin Casemore and Mark Hollingworth. Hard-core Dungeness birdwatchers and top chaps both, they'd already been there an hour.

As it turned out, this part of the day was the highlight of the trip. The theme for the next two hours was Little Gull. More than 100 of them. On and on they came, streaming passed us heading west, seemingly against the odds against this relentless wind. And I mean relentless, with no land to slow it down this gale kept on blowing all day, attempting all the while to rip your face off.

The sight of these Little Gull was spellbinding though. As Mark said: "It's quite something to see Little Gulls out-number Black-headed Gulls during a morning."

Accompanying these lovely birds, which included one solitary juvenile, were decent numbers of auks, mainly Guillemot, a flock of 12 Brent Goose, plenty of Teal and Cormorant, the odd Gannet, two Kittiwake, a Mediterranean Gull and a Bonxie (that I didn't see).

By 11 o'clock the numbers petered out, so I headed for the reserve, completely forgetting about looking for the first-winter Caspian Gull regularly seen by visitors.

I spotted a couple of Marsh Harrier on the drive back to the reserve where I had a couple of targets, one of which was more likely than the other. The first and most probable was the long-staying Long-eared Owl, and secondly a Penduline Tit.

In the reserve I bumped into Rich Sergeant and Dave Baker from Tice's Meadow – I always seem to coincide my trips with the Tice's Meadow gang. They'd already been around the reserve and had views of the owl and also one of the two Penduline Tit in the reedbed at Hooker's Pit seen from the viewing ramp.

They steered me towards the Long-eared Owl, now one of the most viewed birds in Britain, down by the dipping pond just 100 yards or so from the reserve.

In theory I did see it, but it was so far in the undergrowth it was impossible to get a decent view. With the wind picking up, understandably this popular bird simply buried itself away from the weather. Later it would disappear even deeper and out of sight.

From there I headed out into the reserve taking in the hides as I went. Best sightings we a couple of redhead Smew, a number of Goldeneye and eight Pintail, including a couple of drakes.

By the time I got to Hooker's Pit I wasn't overly optimistic I would see a Penduline Tit.

Mainly because of this...


Rich Sergeant texted me to say he and Dave had located the Caspian Gull and asked if I had had any luck with the Penduline Tit.

Any luck? I could barely stand upright! The wind was impossible, the reedbed bullrushes were almost horizontal. Needless to say, I gave it up. Another Great White Egret was a distraction on the walk back to the reserve centre.

Another vain attempt to see the Long-eared Owl came to nothing as the light disappeared, so there was nothing for it after that but to head back home.

My first visit to Dungeness for some years was over. It was one of those days that started out really well but the wind, welcomed for seawatching earlier during the morning, curtailed any decent birding inland.

I had another day skiving off on Thursday as the sun was due to come out. There was nothing for it but to head back to the shingle!

It proved to be an altogether more successful day, despite being bitterly cold! A quick trip to the beach nailed the first-winter Caspian Gull – it wasn't doing much, just standing in a puddle. 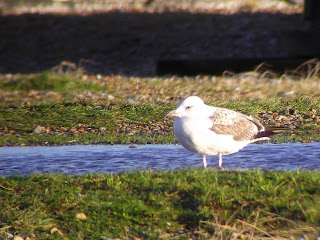 After that I focused on the reserve. What a contrast to the week before.

To my relief the Long-eared Owl was showing really well. 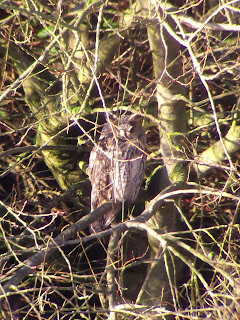 I stayed to watch this magnificent bird for a good 40 minutes, although the digiscope photos didn't come out too well.

I met up with a local birder from Deal (I've forgotten his name unfortunately, although his surname I think is Weigh), and we went round together for the rest of the day. We dropped in at many of the hides on the way to Hooker's Pit, seeing Pintail once more, but no Smew. At Hooker's we tried our darndest to find a Penduline Tit, but failed. The wind was picking up again... Another Great White Egret was the best on offer there.

On our way back to the reserve centre I bumped into another of the Tice's Meadow gang, Mark Elsoffer along with Staines birder Stevie Minhinnick – the Twitter Smutty Birders! They were heading for Hooker's (seemed appropriate considering their name) where I discovered later they connected with the Penduline.

Back at the car park we heard a Glaucous Gull had been seen near the reserve entrance, so we headed there before setting off for Penn Levels. The Glauc had flown off – I suspected to join the other gulls on the beach. I could have made a detour but it was so cold I opted to give it a miss. Predictably, that is where it did end up – and the Smutty Birder duo caught up with it on the beach a short while later.

Another bird I missed was Tree Sparrow. There were a few by the feeders at Boulderwell Farm but they'd flown off just as we arrived!

The drive to Penn Levels took us via Rye and Winchelsea. Having thawed out in the warmth of the car for about 40 minutes, I was reluctant to get out into the icy cold again once I parked up to find the juvenile Glossy Ibis, but I braced myself, and luckily found it feeding in a trench, out of view for long periods. 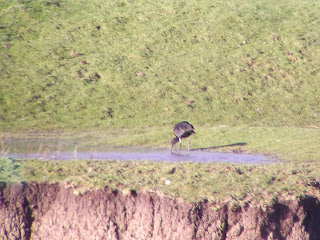 Once my birding partner had seen the Ibis, he set off back towards Dungeness, while I stayed to see what else was around. The were plenty of geese, mainly Greylags but I was fortunate to find a group of 23 White-fronted Goose, plus four Brent Goose.

By now ice began to form inside the marrow of my bones, so this proved a good time to sign off for the day.

So, what did I think of Dungeness? I loved it, of course, but I need to get to grips with the terrain, spend more time there to fully understand the best way to make the most of daily visits. I can fully understand how Steve Gale spends so much time on the shingle, it has a certain magic about it and everything you need from a birding or botanical site. Also it's not a yomp to get around. No hills either, which is a bonus.