Welcome to the 2015 Randon's Rambling Awards. While the world of film rejoices in an evening of high glamour and glitz for the Oscars, the birding world has to settle with me tapping away behind a keyboard for the Ramblers!

Before I start, a brief resumé of my birding year in 2015.

It was not a particularly memorable one for me, if I'm honest. The passing of my dad in February was a massive blow, despite the fact there was a sense of relief he didn't suffer for too long with the ravages of dementia.

I then had a bout of shingles during the summer, while unpleasant and kept me from any walks around the local countryside for a time, it really wasn't too much of a big deal compared to what a lot of other people have had to put up with.

On the birding front, it was a year that promised much and started off pretty well but faded quite dramatically from the autumn onwards and was filled with plenty of frustration. Basically, mainly due of work and a few other commitments I haven't really been birding for the last three months. I really do need a break!

Whenever I thought there was a window of opportunity, something invariably cropped up to put the kibosh on the idea. It's difficult to see how this pattern is going to change, but then I seem to say the same thing every year!

What I have done, however, is keep a close look at what has been happening around the local area and across the country these past 12 months, which means the Ramblers are particularly competitive this year and some of the awards have hung in the balance right up to their announcement.

The highs and lows were pretty clear cut. Locally, the high was my first Ring Ouzel sighting on the local patch at Holmethorpe, and the downright low was dipping Holmethorpe's first ever Red-rumped Swallow. That dip still smarts as I write this, particularly as I was the one who predicted we would get one about a week or so before it appeared!

The culprit for this agonising dip was a Peregrine that flew through the large flock of Swallow and this lone Red-rumped, scattering them about an hour before I arrived back from London around dusk. It was never seen again, despite searching before it got completely dark that evening and also the following morning.

Holmethorpe had one of its best year's in 2015, particularly during the spring. Along with the Red-rumped and Ring Ouzel, we had Garganey (a pair at the beginning of April and a male at the end of the month), Wood Sandpiper, Osprey, Whinchat, as well as the first Nightingale for many years. Later in the year the first Short-eared Owl (also predicted by yours truly) for some time popped up out of the long grass and finally our second Brent Goose of the year less than a week ago.

Our records have been helped by a patient and diligent crew of patch watchers, notably Ray Baker, Gordon Hay and Ian Kehl.

In Britain, there were some memorable moments. The female Red-footed Falcon at Barcombe Mills was a fantastic and beautiful bird, as was the White-winged Black Tern near Wareham in Dorset. I enjoyed the pursuit of a pair of Serin at Shoeburyness and a Little Bunting on Ashdown Forest at the end of February, and the added bonus one August morning of a handsome male Red-backed Shrike at Cuckmere Haven.

Predictably, there have been a few frustrating moments – dipping the Pallid Harrier at The Burgh, near Burpham was particularly annoying as I'd tried more than once to see it. The Hudsonian Whimbrel at Church Norton, while not a dip, was just plain tedious as twitches go – waiting hours for the tide to go out and seeing the bird for just a few fleeting moments before having to leave. An typical twitch, I guess!

Elsewhere across Britain, there has been plenty of excitement and while I haven't been birding that much this year in comparison to previous years I've enjoyed reading about the exploits of others.

As with every 12 months, bloggers, twitchers and patch workers come and go, but it is those who have made 2015 memorable who are worthy of a Rambler – the birding Oscar for those who mostly bird in Surrey, the Surrey that includes Spelthorne that is, or maybe just the Vice County of Surrey, or... whatever.

The winner is:
Lee Dingain 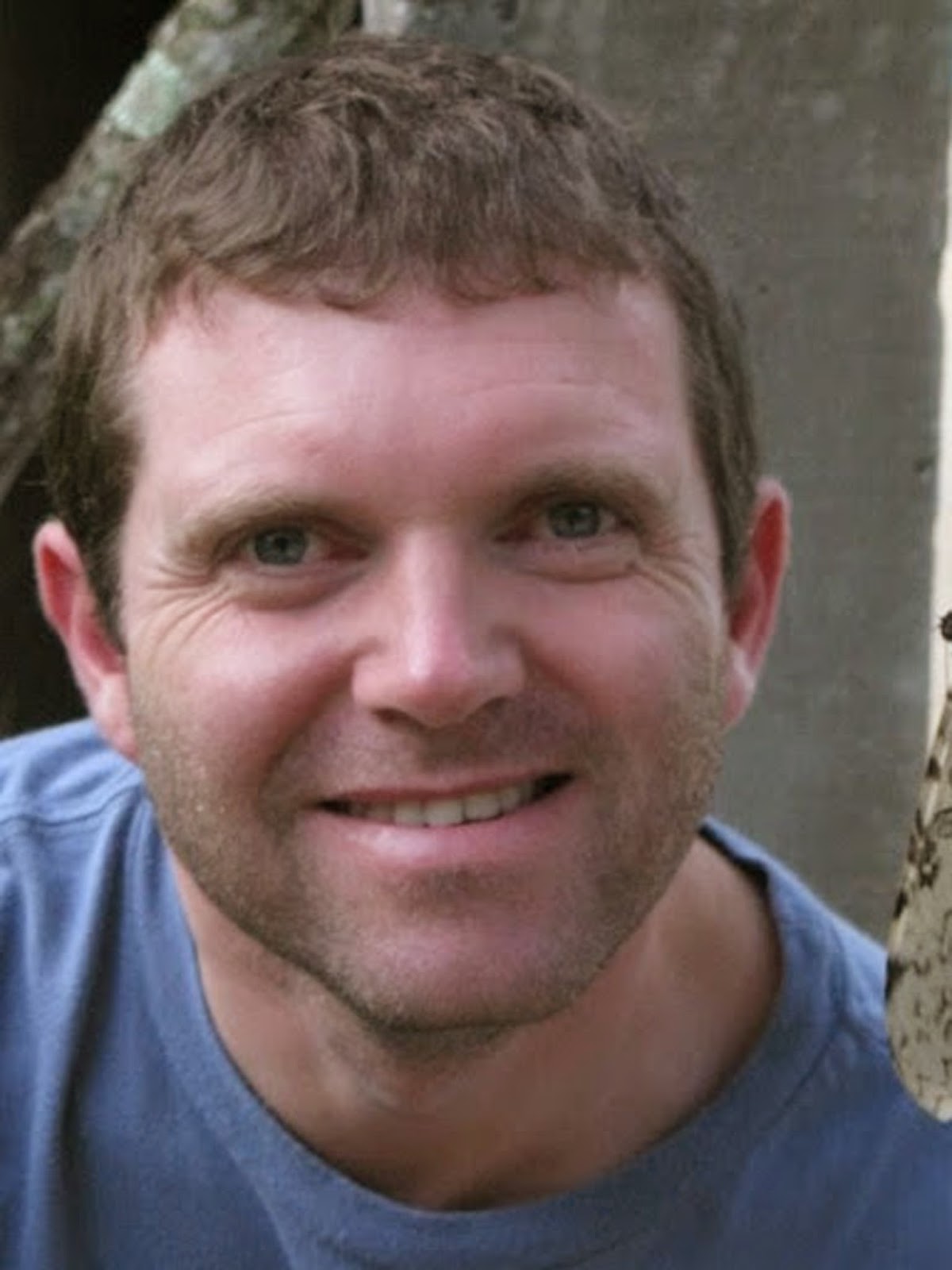 Congratulations to Lee Dingain, who becomes the first repeat winner of the Patch Birder of the Year. It was another close-run contest, but Lee had a great 2015, particularly in the second half of the year.

Like all great patch watchers Lee deserves this award for traipsing around the same old area day after day in the often vain attempt to find something interesting to see. In 2015 it paid off – a Great White Egret was a great aperitif for what was to come. The Barred Warbler he discovered at the beginning of September, a Staines Moor first that got into the local papers, was a great find, as was the Wryneck soon after and the Black Stork that flew over the patch. There were plenty of other great birds at Staines, including the regular sightings of Short-eared Owl.

Lee is one of those selfless birders who are deeply involved in their patch including in its management. Also his work abroad in the Atlantic Rainforest of Brazil and at the REGUA (Reserva Ecológica de Guapi Assu) lodge in Brazil is testament to the amount of effort he puts in for the benefit of future generations

The winner is:
Staines Moor 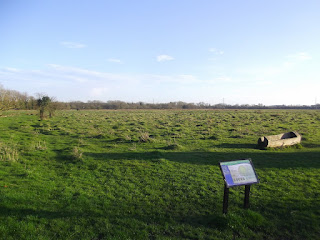 Yet again, a close-run award because so many of the nominees had great sightings. Two sites really stood out this year – Beddington and Staines Moor. Last year Beddington took the prize, and they had more uncommon and scarce bird sightings than any of the other Surrey sites in 2015, but for the first time Staines Moor gets the vote.

Staines Moor is limited to an area of scrub and common land with a river running through the middle of it. There are reedbeds and woodland too, but it doesn't have the diversity of Beddington. In its favour, however, is it is more accessible to the general public.

During the second half of the year the Moor went through a real purple patch – and that sealed the award.

A long-staying Barred Warbler was probably the most popular bird of the year, and at the same time, just a few metres away a Wryneck also stayed for a few days. Add a fly-over Black Stork, a Great Grey Shrike and a Great White Egret and Staines Moor was back in the limelight for the first time since the Brown Shrike of 2009.

The winner is:
Barred Warbler 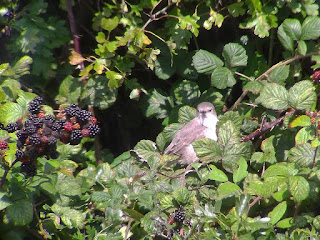 The easiest award of the year. The Staines Moor Barred Warbler was probably the most popular Surrey bird of the year. A true rarity for the area it was easily accessible and stayed for more than two weeks, showing regularly at a time of the year when the weather happened to be fine and dry. It also had a Wryneck for company for some of its stay. Perfect.

The winner is:
Steve Gale (North Downs and Beyond) 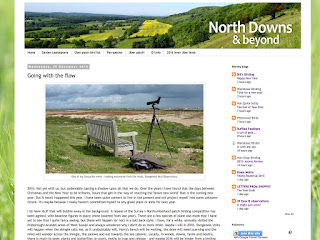 A remarkable achievement. For the third consecutive year, Steve Gale takes the Rambler for Birding Blog of the Year. He had some tough opposition this year but despite the quality of the writers breathing down his neck, he hung on!

Lee Dingain's blog has been a fascinating insight into the world of the patch birder and also much of his other work involving the management of the Staines Moor site.

Jono Lethbridge, as most birders know, is probably the most naturally witty and creative writer in the birding world. He will always be on the list of nominees as long as he keeps writing and taking photos. It is a surprise, therefore, he has not won the award more than once. Discover maybe why in the award section coming up when you read his featured post.

Gavin Haig would have run Steve closer this year had he restarted his Not Quite Scilly blog sooner. Gavin reintroduced Not Quite Scilly at the end of October. He has been sorely missed. Always an interesting and fascinating read, his 2016 will be interesting.

Darryl Spittle's Gwent Birding is a new entry. I've followed his blog for some time but he has now started to write lengthier posts, some of which are truly stunning in their quality of writing.

Despite the competition the award, once again, has to go to Steve. He is the most prolific of writers, and yet he never seems to dry up – he always finds an angle or a new theme to write about. His blog is always the first place I go to when I fancy catching up on the world outside my birding bubble. And I know for a fact how difficult it is to keep up that standard of writing week in, week out. A fantastic effort.

As a result of some fine writing during the past 12 months I have added another Rambler to the Awards. I have a feeling the following award could become quite popular. I which I had thought of it before. There is a need, in my view, to promote great writing and these four bloggers are the best out there.

The nominations are:
STEVE GALE (North Downs and Beyond)
An audience with a Blackcap
http://northdownsandbeyond.blogspot.co.uk/2015/11/an-audience-with-blackcap.html#comment-form
Steve on one of his many visits to the place that has a special place in his heart. Alone with a late-migrating passerine. One of my favourite blog posts. I found it intensely moving and – I'm not sure why – it brought a tear to my eye.

GAVIN HAIG (Not Quite Scilly)
Irresistible. Why?
http://notquitescilly2.blogspot.co.uk/2015/11/irresistible-why.html
He's back at long last. One of many fascinating posts, this one another first-class education into the murky world of gulls.

JONATHAN LETHBRIDGE (Wanstead Birder)
Where is the joy?
http://www.wansteadbirder.com/2015/11/where-is-joy.html
One of Jonathan's best posts of the year – a time for reflection.

DARRYL SPITTLE (Gwent Birding)
The perfect wave of improbability
http://gwentbirding.blogspot.co.uk/2015/11/the-perfect-wave-of-improbability.html
What it is to be a birder out on the patch, in this case a seawatch, on one of those rare occasions patch gold flies passed your line of sight. 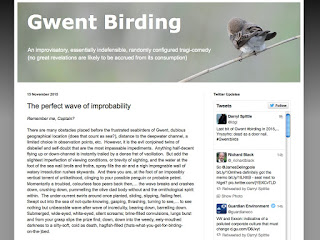 The inaugural winner of the Randon's Ramblings Blog Post of the Year goes to Darryl Spittle for 'The perfect wave of probability'.

This was the most difficult award to decide a winner. Torn between Steve Gale's post, for me poignant and touching – the simple story of a vulnerable migrant – and Darryl's magnificent prose and mixture of styles. In the end it had to be the latter.

You can read it from the link above. What a fantastic passage – jaw-droppingly good. Beautifully crafted, as well as being funny and captivating. As someone who posted a comment about this post said – such erudition. It encapsulates the emotions of a birder out on the patch.

All that's left is to wish everyone a happy New Year and enjoy your birding!
Posted by Factor at 13:46