TOP-NOTCH WINTER BIRDING ON THE ISLE OF SHEPPEY

Spring and autumn migration are the highlights of the year but I find that winter birding can be first-rate. None more so than last weekend.

I woke up to a smattering of snow early on Sunday morning – the first of the winter in the south-east. The first few months of the year tend to be a good time for me to get out in the field and Kent is currently the county that has been delivering the goods.

I reckoned the further east I went the less likelihood there would be snow, and seeing as the Isle of Sheppey has been teeming with cracking birds in recent days it was the ideal destination. It turned out to be one of the best mornings birding I've had in a while.

The first stop was Minster to see a Shorelark that had been present for some days. When I arrived at the Barton's Point parking area, the bird had gone missing, having been flying up and down the beach.

Eventually it was found on the shoreline close to the water's edge, before it flew back to the shingle.  It was here I met the 'Albatross Hunters' – Peter Hobbs and Pete Webster from Essex. These are the guys who happened to be at Minsmere, sitting in a hide waiting for the rain to subside, hoping to see a few Nightjar later in the day, but saw a Black-browed Albatross instead when it flew in and landed at the reserve last July. Read about it here

Both top lads, I spent much of the time talking to Pete Webster – who had travelled to all manner of countries, including Ethiopia, but had never seen a Richard's Pipit – rather than watching the Shorelark. I have to admit I enjoy a bit of banter when I'm out – it makes the day all the more enjoyable.

While we talked about birds seen and missed during the past year, another birder, from Surrey, was getting decent views of the Shorelark to within a few metres. I discovered the following day, via Twitter, that it was Shaun Ferguson, another Tice's Meadow visitor.

Once decent views were had I headed off for the Swale Nature Reserve. A Richard's Pipit and a Hooded Crow were on the wish list here. After a bumpy drive along the track to the car park I set off into the reserve. I opted to go for the crow first as it was situated furthest away. On the way towards the far end of the reserve a Marsh Harrier cruised low overhead and then a flock of 37 White-fronted Goose arrived and circled the reserve above the 1,000 or so Brent Goose, calling as they did so. Eventually they came into land to join the one solitary White-fronted already there.

I've decided I like geese, particularly large flocks of them – always a spectacular sight and sound in the air. 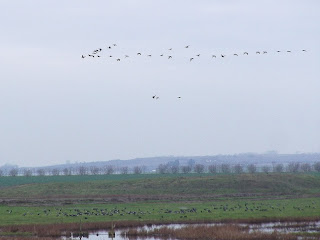 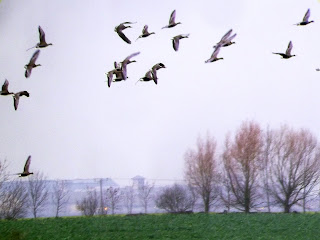 I carried on walking, along with a retired couple who were interested in seeing the bird, stopping now and again to look out at the flock of corvids in the distance, but couldn't spot the Hooded Crow. Walking in the opposite direction was Shaun, who reckoned he'd seen the bird along the fenceline, but we'd need to walk on a bit further to get a view.

I had to make a phone call around then and while I was on the phone Shaun was on the crow. A quick trot to catch up and I was looking at my first Hooded Crow in Britain, perched on a fence post. You couldn't miss it.

It was good timing, as a couple of minutes later it flew from the post into a dip in the field where it was out of sight.

If I had had a bit more time I would have spent it in the lone hide looking out on to the scrapes to see what was about but with a good couple of miles to walk back it was best to head for the spot where the Richard's Pipit has been regularly seen and set up shop there.

Once on the bend before the car park, I met up again with the Albatross Hunters, who had been watching the Pipit – Pete had got his lifer – before it flew into some deep grass where it had stayed for about 30 minutes. As time went by, nothing much happened.

I'd just announced I would give it another five minutes before heading off when it suddenly flew up from the long grass and dropped into the field opposite the pathway.

It doesn't happen often but, for once, everything had slotted into place and the Richard's Pipit showed well for a good few minutes. Pete Webster then shouted "Short-eared Owl" and behind us a Shortie was flying low across the reserve, heading west, being mobbed by a solitary Carrion Crow. 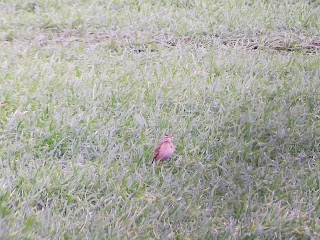 A perfect end to an excellent few hours. The Isle of Sheppey had delivered the goods.
Posted by Factor at 18:38