Birding is very much about being in the right place at the right time, and that is often purely down to luck.

Today was a case in point. It was miserable weather-wise early this morning, with Arctic winds creating biting cold air, more February than late April. A walk around the patch produced three Curlew at the back of Water Colour Lagoon 1, found by Gordon Hay, and plenty of hirundines – at least 30 House Martin to go with 20-plus Swallow and a few Sand Martin.

But there was little else to distract from the cold hands after a couple of hours, so feeling freezer chilled and wet I decided to venture elsewhere.

For some reason, only known to me, I thought a seawatch might prove worthwhile, so I headed for Seaford on the Sussex coast, hoping to see some skuas fly past. However, once I got there I realised I'd made a fundamental mistake. The Channel was calm, due to the land mass that is Britain acting as a wind-break to the northerly winds, and apart from around 15 Common Scoter on the water, all was quite.

What was I thinking? It was an obvious and complete waste of time! What I should have done was head to Staines Reservoir for a Grey Phalarope, found by local birder Dominic Pia first thing, and plenty of seabirds and spring migrants.

It was all happening up at the reservoir, a site I hadn't been to since summer of last year, so I was long overdue a visit. I only stayed at Seaford for about 20 minutes before setting off back past Redhill and on to the M25.

What an idiot. The morning hadn't been a great success, having spent more time in the bloody car than out looking at birds. One day I will learn...

But never mind. By timing my visit to Staines later in the morning my misfortune turned out to be my reward.

The water on the north basin, in particular, was rougher than the Channel had been earlier and there was plenty of activity. This was more like it!

There were plenty of Common Tern and a few Arctic Tern, and a drake and female Scaup appeared on the north basin.

Our group were looking at these when someone shouted out "40 Arctic Tern have just flown in!".

I thought he was joking, but he wasn't. 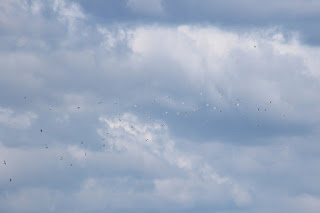 High above the far end of the basin was a large flock of Arctic Tern, circling above the water. Where had they come from! I have never seen so many Arctics. We eventually managed to count at least 60.
What a sight they were. The large flock then dropped in en masse to feed. For me, it was one of the best birding moments of the year so far. Magical.

And they stayed the whole time I was there. Had I arrived earlier in the morning I would have seen a Greenshank, a Bar-tailed Godwit and a handful of Arctic Tern, but never anything like this. I wouldn't have swapped it for anything.

In among the Terns, a first-summer Little Gull joined in the feed. The visit to Staines turned out to be very satisfying, with two Whimbrel and at least five Yellow Wagtail and two White Wagtail to add to the list.
Prior to watching today's seabird spectacle, I'd focused completely on the local patch, and list has been building up nicely this past week. The total for the site is now 126 and includes a late reported Whinchat on the Moors this afternoon, Whimbrel fly-over, a Category C Barnacle Goose, a Hobby, Lesser Whitethroat, Common Whitethroat and a single Yellow Wagtail. My personal tally is 97, and with a few straightforward species still add I should get past 100 without much bother.

Of the other birds of note, our third male Redstart of the spring showed up in the horse paddocks at Mercers Farm on Tuesday, and the first Reed Warbler of the year has been chattering away in the reeds on Water Colour Lagoon 1 by the causeway.

What we could do with now is one or two jaw-droppers during the next week. As hirundine numbers begin to build, I still believe we will get another Red-rumped Swallow. Of the less rare birds just one Arctic Tern would be nice, as would Little Gull and Little Tern. A Ring Ouzel is looking increasingly unlikely as the spring moves on, but we can live in hope!
Posted by Factor at 23:47