THE TICE'S MEADOW SPRING 2016 BIOBLITZ AND THE HORTON-HAY CUP

The Cup, as mentioned above, will be explained in due course.

So, what is the best birding site in Surrey?

If you listen to the birders at Tice's Meadow, they will tell you it is their patch at Bagshot Lea. Mark Elsoffer, one of the Tice's gang, staked the claim on Twitter recently, to which a number of Surrey birders responded – myself included.

So how does a patch qualify as the best birding site in the county? Firstly, the number of species of birds seen in a year would be the obvious number one criteria.

But number of bird species doesn't tell the whole story.

If it was simply a numbers game then Beddington would be number one each year. However, the big problem with the old sewage works is that only a handful of people are permitted into the inner sanctum. The birding is great but access is very limited. When a good bird drops in though, the lads there will do their best to give people the opportunity of viewing it.

So, accessibility is very important. There is little benefit in revealing to the world you have a Siberian Blue Robin on your patch if no-one has a hope in hell of seeing it.

Thirdly, news output. One of a patch watcher's responsibilities is to let other birders know this Siberian Blue Robin has appeared.

But, then, the enormity of the find can be more trouble than it's worth. There are times when revealing the sighting is simply not sensible at first – the Robin may be in a private garden and the owners of the house are more than reluctant to allow people access to view it. If it is a mega of this magnitude, the numbers of birders likely to turn up is bound to cause chaos.

Arguments and fighting may ensue – it has happened. Birders – well, some twitchers and some holding cameras with big lenses more to the point, can behave very badly at times.

I know if I was the one to discover the Robin, I would find the twitch very difficult to manage. There was a Dusky Thrush sighting in Devon that caused a rumpus a few years ago that left bad feeling on all sides and I felt for all those involved.

So, sighting management is important. What else?

A site needs to be pro-active.

For a patch to be successful it needs people visiting and recording what they have seen. The more people are aware your patch exists the more likely people will come and see it.

One of the best ways to get your patch on the map is to do what the Tice's Meadow team have arranged for this weekend. 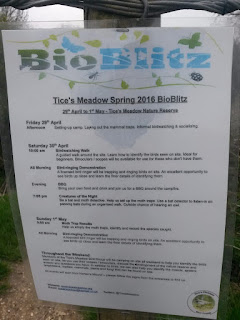 From tomorrow through till Sunday, the gang have organised an event encouraged for the general public. It is called the Tice's Meadow Spring 2016 BioBlitz. Tomorrow they will be setting up camp, laying out mammal traps, birding all day and general socialising.

The following morning there will be a birdwatching walk around the site, with binoculars and scopes available, a bird-ringing demonstration, and later in the day a barbecue around the campfire. As, hopefully, the sun drops moth traps will be set up and the team will be listening out for bats and possibly owls during the night.

No doubt a few drinks will be had and there will be plenty of bonhomie.

The next morning, along with the hangover, the moth traps will be opened and the findings recorded and another bird-ringing demonstration will take place. It sounds like a really great event and credit has to go to all those involved.

So on that basis alone Tice's Meadow must have a great chance of winning an award of some sort this year, but we will have to wait and see. The Rambler for best patch tends to go to the site with the best bird sightings, but another Rambler Award may have to be introduced.

Which leads me to the Horton-Hay Cup.

At the start of this post I mentioned Tice's Meadows' claim to be the best birding site in Surrey, so I put out a counterclaim that Holmethorpe must be in with a shout. Realistically, even if the new boundaries of Surrey or the old vice-county boundaries count, I doubt either will come up with the numbers required to top the list.

So, this new cup competition has been derived by using the surnames of the two patch's top men.  Rich Horton, the main man at Tice's and Gordon Hay at Holmethorpe. Think Oxford v Cambridge in the boat race, just in this case, it is West Surrey v East Surrey.

At the moment Holmethorpe has had 126 species seen on the patch, which compares favourably with Tices's. So, as a bit of fun, the Horton-Hay Cup will be awarded at the end of the year to whichever of the two rival Surrey sites wins the numbers game, with an additional award for the birder with the biggest list.

Every sighting counts. Will it be Tice's or Holmethorpe?