BONAPARTE'S AND BALEARICS, HORTON AND HAY

Bit of a catch-up for the past three weeks. Two visits to Kent have been interspersed with brief local patch wanderings.

The first Kent trip was to Margate to take my mum to a hospital appointment, but I spent 45 minutes at Oare Marshes on the way down, where I managed to see (with the help of others) the Bonaparte's Gull again. Most notable group sighting was five Little Tern that flew in and landed on the East Flood for about half an hour. 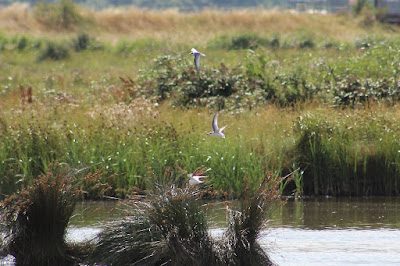 A Little Stint, Spotted Redshank and a Yellow Wagtail were the other highlights.

The second trip was a proper birding session on the beach at Dungeness Point on the 22nd to seawatch for Balearic Shearwater during the morning. The weekend had been unseasonably stormy and there was still sufficient wind to give me hope of some decent sightings.

It took some patience but eventually I was rewarded with seven Balearic Shearwater split into three small groups during a three-hour period, plus two Arctic Skua. Not much else of note though.

On the local front, two new birds appeared, with a lone juvenile Dunlin arriving on the Moors one morning, followed by three Greenshank few days later. These I missed, but two more turned up a couple of days later.
One other bird of interest was a lone Wheatear on Farthing Downs one morning seen while waiting to pick up Annie from a physio appointment in Coulsdon.

The waders' arrival at Holmethorpe topped the patch year list up to 137 as we enter the autumn months. Not bad at all, but unfortunately with regard to the Horton Hay Cup challenge* with Tice's Meadow, our rival patch has hit back with a fine haul of sightings this month, including a Honey Buzzard, Black Tern, Pied Flycatcher and a first for the site, a Nightjar. They are on 141 at the end of August.

So, now tomorrow is September and the real heart of the autumn migration begins. Looking forward to it - so long as I can get enough time away from work to enjoy it.

*The Horton Hay Cup is a challenge between Tice's Meadow and Holmethorpe Sand Pits to see which site can deliver the most bird species during the year. Named after the two patch stalwarts, Rich Horton and Gordon Hay, the winner is designated the best birding site in Surrey – ignoring the fact Beddington Farmlands attracts more birds annually and really is the best birding site in the county.
Posted by Factor at 23:19