It had been a while since I gave Oare Marshes a proper visit, so seeing as it was my birthday on Sunday I thought I'd spend most of the day there. I wanted to spend a decent few hours actually looking at birds rather than spending more time in the car travelling somewhere too far away to really enjoy the day.

Thankfully, the Minsmere Purple Swamphen disappeared the day before so I didn't have to argue with the devil on my shoulder tempting me to go there instead.

Oare Marshes is only an hour away and the reserve is nice and compact with many of the birds easy to view next to the road-side parking. There is always plenty to see here. During a breezy day I saw 14 species of waders, including two Little Stint, a Curlew Sandpiper and two Spotted Redshank. The supporting cast included a single Ringed Plover, at least 12 Ruff, a handful of Whimbrel, a couple of Green Sandpiper and at least two Greenshank.

Numerous Yellow Wagtail, mainly juveniles, migrated around the sea wall, while skywards, a Marsh Harrier hawked the west side of the reserve during the morning and later a Peregrine headed off to the neighbouring pylons to feed on a recently caught prey 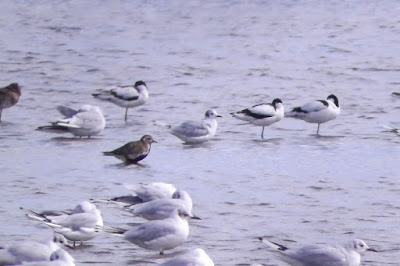 I made a slight faux pas by going early in the morning, when the tide was out, but it didn't really affect my enjoyment too much. There were, predictably, plenty of gulls flocking on the East Flood in the afternoon when eventually the Bonaparte's Gull came into view.

This gull is now a regular summer visitor to the site, this being the fourth year in succession it has appeared at Oare. Where it goes during the winter is anyone's guess, but unlike many American vagrants, all being well this bird will return to Oare next summer. 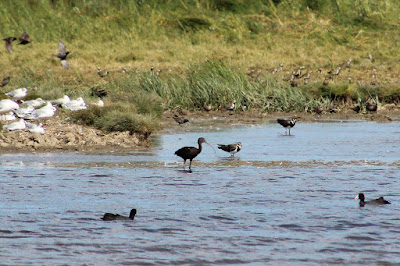 Highlight of the day was undoubtedly a Glossy Ibis that dropped on to the East Flood at around 2pm. It stayed until 3.45pm before flying off north west.

A total of 68 species were seen during an excellent day's birding.
Posted by Factor at 19:53