NOT QUITE FIRING ON ALL CYLINDERS

I've been looking forward to a bit of autumn migration this month but, in reality, it has personally been a bit disappointing. I've focused more on the local patch in the hope something memorable might appear, but it has been pretty slow going.

In between walking the patch I've paid another visit to Oare Marshes. An early start on the 5th, this was en route to Margate to visit my mum and take her to a hospital appointment.

Oare will always make up for a barren spell at home, and seven Little Stint and up to 14 Curlew Sandpiper kept the interest going. A brief visit to a gloomy Reculver threw up a couple of rain-sodden Wheatear, before my final stop at Foreness Point produced two more Wheatear and a Whinchat. 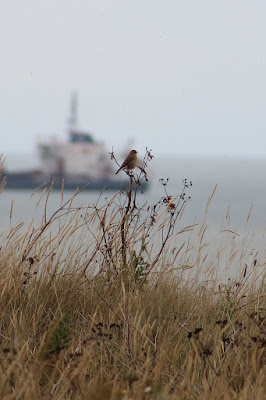 The highlights at Holmethorpe this past fortnight happened yesterday with a pair of distant Whinchat on the Moors, my first for the autumn on the patch, followed by my first patch Peregrine of 2016. This falcon circled low over Mercers Farm before swooping for a prey. It failed to catch anything and then circled high and headed south.
That's been about it. Elsewhere, of course, the quality migrants have been dropping in or flying overhead. Locally, the prime site has undoubtedly been Beddington. Roger 'Dodge' Browne picked up a cracking Sabine's Gull on the 13th, and this excellent yank seabird was followed by a Kittiwake two days later.

Inland Kittiwakes are patch gold, especially in Surrey. I've never seen one. I've also never seen a Honey-buzzard in Surrey – or anywhere else for that matter.

But Beddington was the place for one of those, too, with one heading south last Saturday. Canon's Farm has also been a site for a Honey-buzzard, with Steve Gale picking one up on the 6th.

Elsewhere, Tice's Meadow had a brief Pectoral Sandpiper, while Leith Hill has been the place for views of migrating Osprey.

The bird I'm always keen to see during the early autumn is a Wryneck, but I fear I will now have to wait until next year. I simply couldn't spare the time to drive down to Shooter's Bottom for the Wryneck that recently stayed for a week until the morning after it had predictably left.

I went to Leicester for a meeting on the 1st of the month and drove back via the M40, and so made a detour to Otmoor to see if I could connect with the juvenile Purple Heron in the late afternoon.

It was a fair old walk to the best vantage point, the first of the viewing screens, and was I welcomed by a regular local birder and another birder with her young daughter. They both looked sheepish as I looked out over the scrape.

"Anything interesting?" I asked.

"About four minutes ago..."

Bugger. The Heron takes a habitual route across the reserve and tends to finish up at the western end in an area covered in reeds, where it likes to fish before roosting for the evening. This it had done four minutes earlier.

There wasn't much point in sticking around for too long, so after 20 minutes I trudged back to the car. Strangely, I was relatively unmoved by the whole experience. I'm probably simply getting used to twitching dips – I've had enough of them!

What's to follow? Well, I shall persevere with the patch, which overall has been rewarding this year, and will keep a close eye on the skies over Holmethorpe in the vain hope a decent raptor drifts into view. As local birders we all live in hope of the future big find. It does happen sometimes.
Posted by Factor at 21:27