BRAVE NEW DAWN (TO ME, AT LEAST)

I overdid it a bit this last weekend. I went a bit birding mad and got up at the crack of dawn on both Saturday and Sunday and walked miles. I also fitted in a bike ride with Annie on Saturday afternoon, so now I’m completely done for. I feel so stiff and weary I can hardly stand upright when I walk.

The weather was fantastic and I managed to take a number a half-decent photos on my travels. On both days I visited Staines Moor and Staines Reservoir. Both places have come up with some good birds recently, particularly the reservoir. The water was like glass and there were plenty of sea birds on the water. The main problem at the reservoir when the sun is warm and the air still is the swarm of insects. Thousands of midgies in your face – they are relentless – thankfully, not ones that bite and good food for the birds.

The Great Northern Diver was still on the south basin, but the two Garganey had gone – which was typical, as I’d brought my camera with me this time to record them. Little Gulls were in abundance but no Terns. As is often the case when you go expecting, or at least hoping, to see something in particular, they are nowhere to be seen. Arctic Terns were on my list of potential spots, but alas, they had moved on.

The most interesting sight on Saturday, however, was the Whimbrel that flew right in front of me before circling the reservoir and out of sight. A brilliant bird to see out of the blue.

On the second day the bird that caused a lot of attention was a Water Pipit, which was flitting around the edge of the water and fence posts very close to the west entrance.

So, more good stuff on the water then, and not bad either over at the Moor. A Little Egret was prominent on the river, and the Sedge Warblers were very active in the reeds. The Cetti’s Warbler, predictably, didn’t want to show at all but was singing in the distance. Pipits and Blackcaps were plentiful, but I’m struggling to tell the difference between a Meadow Pipit and Tree Pipit, so everything I’m looking at perched on a bush I’m recording as a Meadow. 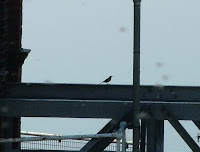 I managed to get out in the early evening on Saturday at Holmethorpe with the idea of looking for a Lesser Whitethroat that was recorded by Graham James singing in the bushes. I bumped into Gordon Hay, who was looking for the same thing over at Spynes Mere. Just as well I was with him, as he immediately heard one in a nearby shrub. I wouldn’t have picked out the song, but there it was in the blossom. Half the birds I’ve seen recently have been the result of tip-offs or being with someone who knows what they’re doing.

On the bike ride with Annie we both heard a Cuckoo in the Buckland area, and I also heard one on Staines Moor. I haven’t ticked it off as I don’t count birds I haven’t actually seen as a sighting. Makes sense to me, anyway. 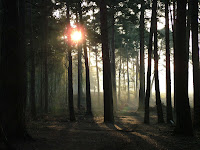 The highlight of the weekend, however, was undoubtedly on early Sunday morning, with a visit to Ockham Common before setting off for Staines. Not for the birds, but for the beauty of the place at that time in the morning. The light at 6.30am (6.30am! Hard to believe I managed it) under a clear sky was utterly breathtaking. A light mist hovered over the ground as the sun came up. As I walked round I heard the distinctive song of rising Woodlark in the sky – three of them. A wonderful moment. 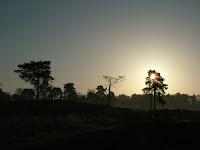 Another sight at Ockham (one I actually anticipated) was a Crossbill high up in the trees, which flew off with about nine others across the Common. Walking back to the car, a female Stonechat perched briefly on some heather before flying off, while high up in the conifers the high-pitched whistle of Goldcrests just about registered on my eardrums. I hope the photos I uploaded do the place justice.
Posted by Factor at 19:21