With the weather due to deteriorate with northerly winds over the weekend - which means the migrants will hold station until the wind changes back and it will be flippin' cold again - I took off to Staines Reservoir this morning in the hope of seeing two or three new species.

I got there by 6.30am and Bob Warden was already in position. He had spotted two Little Terns and four Sandwich Terns yesterday, as well as four Whimbrel, so it was too tempting not to go over to see if they reappeared. As it turned out it was a very quiet morning. The Great Northern Diver was on the north basin, until he decided to fly off over to the King George VI Reservoir - it was the first time I'd seen it in flight. There were more than 15 Common Terns feeding, plus a lone Common Sandpiper, but not much else. I stayed for a while and then headed back home via Ockham Common.

I had a good walk round and had a splendid view of a Woodlark up in on old dead pine tree. You could hear its plaintive song from quite a distance. There were also plenty of Coal Tits high up in the conifers. The best sight, however, was of a female Stonechat calling its mate in the distance. It came close by and stayed for quite a while. 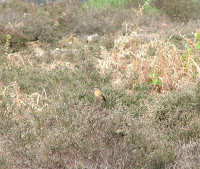