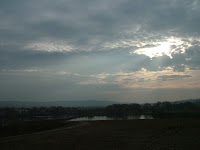 Had a quiet Saturday, when I only went over to the Watercolour mound for a few minutes and saw a Wheatear. Funny how, after such a long time without seeing this bird, I now see them all the time. I also saw a Sparrowhawk on an afternoon bike-ride with Annie.

Sunday, however, was a different day altogether. It was the annual Holmethorpe Bird Race, where local birders are invited for a day of bird watching from dawn till dusk. The idea is to spot as many bird species as possible in that time, although you need the stamina of Paula Radcliffe to complete the whole day.

It's just for fun, and a great excuse for being out all day taking part in my favourite pastime.

I didn't get started until 7.00am, whereas Gordon Hay, for example, was out and about by 3.30am looking for Tawny Owls. This man takes birding to a different level to me.

The day started with a my first Swift of the year, another female Wheatear on The Moors, and a Grey Wagtail on the footpath adjacent to the Water Colour mound and The Moors. A good start. After that it was spotting the usual fare - Crows, Blue-Tits, Chaffinch, etc - and then it started to rain at about 10.30am.

After a stop for breakfast in my car I went off to Mercer's Lake and Spynes Mere. This is when I made a great discovery, although no-one else saw or heard it, so they only have my word for it. In the bushes next to a stile leading on to Mercer's Farm I heard a sound I'd never come across before. An unmistakable whirring noise that went on for about ten seconds. It stopped, then a warbler hopped on the fence post and raised its head and made the sound again. It was a Grasshopper Warbler, and I was just about to take a photo when it went into the undergrowth. It has not been heard of since, which is frustrating to say the least.

So after much excitement, doubt and debate about it, I moved on. The next bird I heard was the sound of spring in the distance. After meeting up with Graham James at Spynes Mere, I walked around the lake. At that point a bird that looked like a bird of prey in flight landed in a tree in the mid-distance - and there it was, a Cuckoo and it was calling. Again, I missed the chance to take a picture as it flew off. I pursued it, but could never get close enough again. A really exciting spot, and along with a Reed Warbler and a group of House Martins, the last good one for me at Holmethorpe during the day.

At midday I decided to take a break and slope off to a couple of other venues for a few hours. A quick blast around the M25 and I was soon at Staines Reservoir.

Staines usually comes up with something interesting and it didn’t disappoint. I met up with Bob Warden once again – he’s a good chap and very helpful – and he pointed out two Arctic Terns – birds I was keen to see. They are difficult to separate from Common Terns – of which there were dozens of swooping down to feed on the many insects flying around above the water. Arctic Terns are finer in build with longer tail streamers and its flight feather have less black at the edges. Hard to spot, but once you’ve got your eye in it’s OK. There were at least 25 Little Gulls on the water and I also spotted a couple of White Wagtails – another first for the year plus about 50 Swift. The day was becoming very successful. 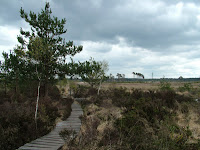 Thursley Common was next on the agenda, and within 40 minutes I was there. Intriguing place, Thursley. Not the prettiest patch of countryside in the world, but there is a kind of magic about the place. It was quiet apart from the sound of the brisk wind that was picking up and a pair of Curlews - they breed here every year - with their distinctive call when in flight.

Having been given directions from Bob, I came across my first find of the visit, a Tree Pipit. I now know the difference between a Tree Pipit and a Meadow Pipit – the song and the way it flies into a tree are completely different from a Meadow Pipit. It’s a case of once you’ve heard it and seen one, you know what it is from a mile away.

Next up was the second find, one I had missed at Holmethorpe a week ago - a Redstart, a beautiful male singing in the conifers and showing well. Thursley is always good for Redstarts – they are hard to miss once you’ve found the right spot. Next up, three Woodlark flew up into a bush – another bird that turns up frequently here.

But the bird most people come to see at Thursley wasn’t airborne until I decided to head back to the car park. Then, in a flash, two Hobby lit up the sky like a pair of giant Swifts. They didn’t stay in the air for long, but their aerobatics always catch the eye. In an instant they had disappeared. A short-lived spectacle but a nice taster for the coming months.

So, a good afternoon so far, and now it was time to rejoin the Bird Race. Once I got back to Holmethorpe, I met up with Graham and Gordon at 4.30pm and by now we were becoming weary (apart from Marathon Man Gordon). A small flock of Common Tern had flown over earlier, and another regular birder at Holmethorpe had seen Whimbrel and Yellow Wagtail over on The Moors. Good stuff.

Once Graham had called it a day and I’d gone off to look for this blessed Grasshopper Warbler again (not a sniff), Gordon spotted a Marsh Harrier flying through. Needless to say, he won the competition for the most birds seen – more than 80. I got to 66 at Holmethorpe, but 76 in all for the day.
Posted by Factor at 10:36