BOGGED DOWN BY MARSH TIT

It's been a long slog to find it but in the end I did. My first Marsh Tit (139) of the year, found at Ranmore Common. The Common was supposedly a dead-cert if you want to find this neat little bird, but on two previous visits I couldn't find one. The same thing happened at Bagmoor Common - although I think I might have caught a glimpse of one but at the time I couldn't be sure. This time round I saw one in an oak tree and heard another - and now I realise it is a song I have heard before. 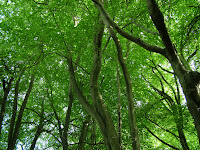 So, at last, one monkey can be removed from my back. What made it slightly bitter-sweet though was that I have just taken up a seven-day trial with Rare Bird Alert - a brilliant website that gives you up-to-the-minute reports on all rare bird sightings around Britain - and I found out later that a Hoopoe had been sighted at Chertsey and if I had known I could have gone over there to take a look.

Similarly, I heard about the two Red-Backed Shrike sightings too late, visiting both sights (Banstead and Richmond Park) to find that the bird had long gone.

I shall try Chertsey in the morning. Fingers crossed.
Posted by Factor at 20:00