IN THE NIGHT GARDEN

I took myself off to Chobham Common for a spot of night birding on Wednesday evening, and a fantastic evening it turned out to be - one of the most memorable yet. The Common is a strange place at night - not a sound but for one particular bird, one I had yet to see. After getting up close as the light faded, I got my first glimpse of an enigmatic Nightjar (136). 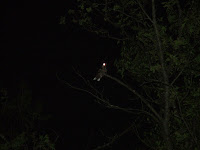 The Nightjar's call is unmistakable - a constant churring sound that can go on for minutes at a time. The other sound you might hear is a sudden flapping sound as it takes off from a branch of a tree - I found out later that night from watching Springwatch that the bird occasionally claps its wings when attracting a mate - but once it is in flight it is silent as it glides, swoops and circles in the half light.

The scene is quite eerie, but utterly captivating. I had one take off nearby and circle round me, swooping really close before settling again on a branch. I could have stayed for hours watching and listening to this spectacle but after an hour I made my way back to the car. On the way, there was a blur and a rushing sound as a Woodcock (137) flew swiftly across my path. In a flash it was gone.

A short while later as I was driving home I had to stop suddenly. There was a bird in the road right in front of me and it wasn't in a hurry to move. A Tawny Owl (138) turned to face the headlights as it feasted on some road-kill before reluctantly flying into the bushes by the side of the road. An excellent, if lucky, spot to complete a brilliant evening.
Posted by Factor at 11:08