THE RACE IS ON

After a week off I paid my first visit to Beddington Sewage Works. The timing of the visit was not exactly for the right reasons. Having not been out looking for new Surrey 'ticks' for more than a couple of weeks I thought it was time to raise the bar a bit. I say this because I'm signed up to another website called Surrey Birders, where you can log all the birds you have seen throughout the year. There are four stats tables on the site, one is more of a competition to see who can spot more bird species on a particular patch - I chose my local area (Spynes Mere and Holmethorpe Sand Pits). 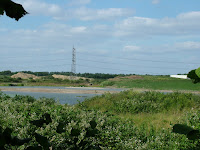 The competition, for what it is worth, has pretty much already been won by a chap called R.T. Horton at Tices Meadow, which gets its fair share of interesting birds. I'm about 30 species behind so it's not going to be me who tops the list this year. To be honest, it would take a great deal of dedication to get even close.

So, with that in mind I've opted to try to top another list, the number of different species seen in Surrey. Well, the same man is top of that list too, and no matter how hard I try he always pulls a few birds out of the hat to keep ahead. Before this weekend, he was on 140 species while I was on 139.

I had a quick look at the list yesterday and saw that he had visited Beddington and was now up to 142 species. At this time of year it's incredibly hard to find new birds, but Beddington does have one in particular up its sleeve, which is nigh on impossible to find anywhere else in Surrey.

That, therefore, was the reason that led me to follow in Mr Horton's footsteps and go to Beddington. Ridiculous really, but then I always had the site in mind anyway, but because you need a permit to see the place properly I didn't think it would be that great from the wrong side of the perimeter fencing.

I was wrong though. You can actually see quite a large area of the two 'scrapes' and there is plenty of interesting habitat around the perimeter footpath.

The visit started off OK with an astonishing number of Grey Herons on view - Beddington must be the Heron capital of Surrey as I counted at least 25 of them. I also spotted a Green Sandpiper, a couple of Little Ringed Plovers and Lesser Whitethroat but I was dismayed when I went to see the area which has been set up specifically for the bird I was looking for. Feeders have been erected to bring the birds in, but when I arrived, the feeder was empty and there was not a bird in sight.

I was about to leave when I thought I'd just take one last look, and low and behold, a male Tree Sparrow (140), followed presumably by its mate, flew onto a bush close by. They didn't stay long but at least I got to see one. I will make another visit one morning to get a proper viewing as the feeders lure in at least ten to a dozen normally.

So that was Beddington, a place I shall be visiting on more than one occasion come the autumn. 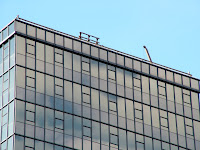 I wasn't done yet, however. I went home via Sutton in the hope I would see another new sighting. I parked in The Quadrant near the station, and looked up to the top of a tall building opposite. Perched on two corners, looking out over their territory, were a couple of Peregrine Falcon (141). These birds have made Sutton their home for some time and it was a pleasure to come and see them. I shall come back in the future in the hope of watching them in flight.

It's coming up to halfway through the year and I'm just one behind the leader on 141 birds. Before the start of the year anything over 100 and I would have been happy. From now on it is going to be a hard slog to find new sightings but I'm up for the challenge.
Posted by Factor at 19:39