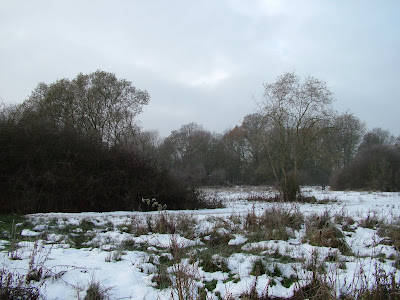 Having been seen regularly for the past week, I opted for a quick visit to Little Bookham Common yesterday to find Hawfinch. I had a vague idea of the exact location but wasn't sure, and arrived near the site at the same time as Birdwatch magazine editor Dominic Mitchell. After a brief detour - Dominic's navigational skills aren't quite World Rally co-driver standard - we both parked up at the right spot and made our way to a group of bushes where another birder called Tim had set up shop.

After an hour's search we came up with very little apart from a stack of Redwings and a Snipe that flew past us. I was on the usual tight schedule and reluctantly had to make my way back to the car, where I bumped into Mike 'Posh' Spicer, who had just arrived. After we had a laugh at my Waxwing dipping prowess (actually, it's not that funny anymore), I was about to get into my car when I heard a shout. Looking up at frantic arm waving in the distance, it was clear both Tim and Dominic had struck gold. As Posh and I scurried over to the spot, Dominic shouted out 'to your right!' as the birds flew off. Scanning manically at the skyline, I saw nothing.

After a brief look in the trees, it was apparent I had dipped again.

Curiously, I wasn't too upset. I immediately planned to go back this morning, arriving just after 9.00am. I waited. Nothing. I had a good look around the area - in the bushes and tops of trees - still nothing.

Panic started to set in.

I couldn't bear the thought I might draw another blank. Everyone I know in birding is currently branding me as a dipping professor, and the nickname 'Dipper', rather than 'Factor', was becoming an alarmingly realistic prospect.

I scanned the tall trees behind the car park and saw what looked at first glance like a Chaffinch. I had a look through the scope and, lo and behold! A Hawfinch (162) at last! What a blessed relief. 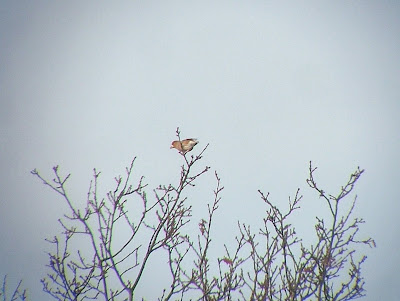 Such a striking and attractive bird - big and bulky, but strangely beautiful. If it were a World War Two fighter plane, I'd compare this thick-set finch to a Thunderbolt.

It didn't stay long before flying off in the opposite direction to where I was standing, but not to worry. I'll be back to get a better view over the coming weeks. Hopefully, these birds will stick around before the year is out.

Next stop was Papercourt, near Ripley. I was on a tick mission and dutifully succeeded without mishap. Actually, it was a soulless, cheap and nasty tick. I parked the car, walked across the road to the side of the lake, pointed the scope in the general direction of some wildfowl swimming in the thawed out area of the water, saw three Goosander (163), took a photo to record the moment, and left.

No time to try for Waxwings in Guildford, so I went home to catch up on work. As the sun went down and thoughts drifted towards making Cottage Pie and crashing out in front of the telly, I had a look on Rare Bird Alert (fatal mistake) to see what had been going on around the country today.

Another blue triangle appeared right smack-bang in the middle of the south-east of England. 19 Waxwings. OK, probably the Teddington lot again. I zoomed in... Redhill. Holmethorpe... Water Colour Lagoons in trees next to the railway... Only a five minute walk from my house...

This is becoming pathological. I have possibly 19 Waxwings roosting less than half a mile from me as I write this, on my patch (which I have disgracefully ignored for most of the past four months), and will have to wait until first light to see whether they are still there.