Let's hope it's a good one.

Well, after ten previous dips (including first thing this morning) I have now laid my bogey bird to rest. 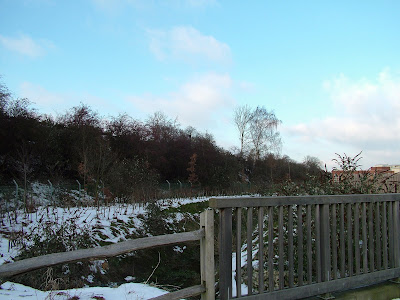 It started off badly. The message had gone out the previous evening about 19 Waxwings in the trees by the railway line at Holmethorpe Water Colour Lagoons. I arrived at the right spot just after 8.30am, where Holmethorpe birding guru Graham James and his mate Paul Kerry were already present.

All was quiet apart from loads of Fieldfares, Redwings, Goldfinches and Chaffinches. Graham had been at the site before sunrise. We waited for an hour but nothing materialised.

We were all a bit sceptical, partly because there was no record of who had actually seen the birds. Graham had contacted Birdguides, but they didn't have a name. Normally, a regular birder at Holmethorpe Sand Pits would contact Graham, and he would put the record on his website.

Having advertised my Waxwing woe on this blog for a number of weeks, I was also beginning to be concerned that someone had claimed to see the birds just as a wind up, and a means to poke a bit of fun at me. Not that missing Waxwings was getting to me or anything...

Anyway, we gave it up as a bad job. I had joked at around dip number six with Johnny Allan that I was aiming to get into double figures. Dip number 10 was now complete.

Annie was off to the gym this afternoon, so I dropped her off in Redhill, and went for a brief drive round, just in the hope I might find them.

I ended up back at the Water Colour complex, and parked up next to another birder, who was about to leave. It transpired he was the guy who had seen the 19 birds yesterday afternoon. His name is Richard Perry, and he had come up originally to find the Smew that were previously on Mercer's Lake.

They had gone, but while walking round the area he discovered the Waxwings. Another regular Holmethorpe birder, Des Ball, was also present. The birds arrived around lunchtime and stayed for about an hour and a half. He'd come back to have another look, but had drawn a blank.

I gave it a go and met up with Des, who was already in position. Within five minutes I was looking at the unmistakable silhouette of ten Waxwings (164) perched high in a Silver Birch by the railway line. They took to the air as soon as a train rushed by, but they always returned to the same tree, before dropping down into some berry-laden Hawthorn bushes below. 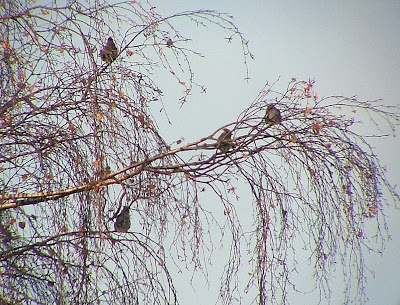 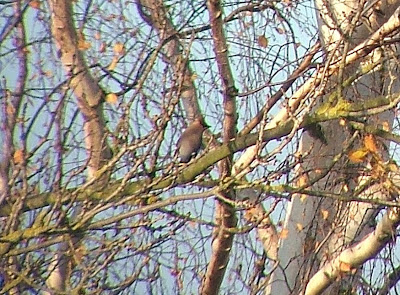 Having been an impromptu visit, I hadn't brought my scope, so I rushed back home to get it and was back in ten minutes. The birds had flown off, spooked again by the trains going by, but after about half an hour as Graham arrived, five made a return visit.

There was quite a gathering of local birders watching by now, including Gordon Hay, with the Waxwings perched in the same tree again. They were a bit hard to get a clear view of (consequently the photos are rubbish), but it was fantastic to see these extraordinary birds at long last.

How amazing, that after all the previous disappointments, I get to see these Waxwings on my own patch, less than 400 yards from where I live.
Posted by Factor at 18:13