While the last week has been all work and no play, I have had the time think about stuff - some bird-related, some not. Apart from staring enviously at the Rare Bird Alert map every day at all the tasty pickings along the east coast I haven't a prayer of going to see, plenty of birding issues have been whirring around in my head. One that kept gnawing away at me was the issue of birding being a cool hobby. Which it isn't, obviously.

This in itself shouldn't really bother me, but outside of areas where there are safety in numbers - like at a nature reserve - it does. I don't like being stared at like I'm some nutter who has been let out on day release. The general public regard bird-watching as a hobby for sad people with no lives. The BBC twitching documentary only reaffirmed that view.

The more obsessed birders among us don't give a stuff about this because they are so blinkered to anything that is going on around them, including in their own homes where they may still tenuously have a wife and children.

I know this subject has been brought up on numerous occasions on many blogs, but the stigma attached to our hobby just won't go away.

I for one think it would be no bad thing. There are a few cool birders out there, I know one or two who I regard as acceptable human beings who you could drop into a crowd of people and they would still blend in OK.

But I have figured out that that would not be the case if you dropped someone into a crowd of people if they were staring through a scope. A pair of binoculars is unobtrusive, so isn't so bad, and someone using a camera with a bloody great big lens attached to it actually looks very good. In fact, I reckon a number of birders have opted for the camera rather than the scope, not only so they can take great photographs, but also because they want to enjoy their birding without looking or feeling like a prize berk*.

Now, it's very unlikely every birder who is worried about these things will now go out a spend a few grand on a decent camera and telephoto lens just so he won't feel so self-conscious, but there must be a way to turn this stigma around.

Celebrity birders could be the figureheads for our hobby. There are a few out there. Bill Bailey is a well-known one - everyone likes him. Then there's Dermot O'Leary, who hosts the X Factor. I discovered recently he's loves birding (he doesn't shout it from the rooftops though does he?). Guy Garvey, the lead singer of Elbow - he's another one - although I didn't hear him shout out to the crowd at Glastonbury, in the middle of the chorus of One Day Like This, "let's hear some bird calls!".

Maybe we should turn the subject on its head. Let's make the bird cool. Shouldn't be too difficult. If birds became hip, then everyone would want to be a part of it. That's why such places as the International Centre for Birds of Prey in Gloucestershire are such good value. We went there a few times about ten years ago and loved it - the displays by the Lanner and Saker Falcons were absolutely amazing. We even did a course on falconry and went out hunting with a pair of Harris Hawks, one of which I had perched on my arm for long periods. Now, that was cool.

But you can't do that every day. No, the bird has to have a good PR and marketing strategy to raise its profile. It needs an actual bird to represent the rest. The RSPB has an Avocet as part of its branding - but to be honest, it doesn't float my boat.

Can't be a Quail - be utterly useless as no-one would see it. Or a Grasshopper Warbler, for the same reason. It has to be something dramatic, like a raptor - nothing else fits the bill. But which one?

The Pallid Harrier would be perfect but they are too rarified. We need something everyone has the chance to see and yet still turns heads... Kestrel? Buzzard? No.

I nominate the Red Kite. It is striking to look at, and you can see them all over the place, even as you drive along a motorway. If anyone has a better idea, I'd be happy to consider it.

We have a figurehead, all we now need a plan of action. I'm open to suggestions. 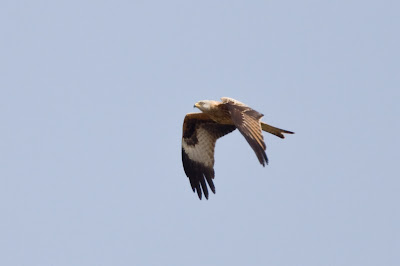 The photo is by kind permission of Dodge (even though he won't know until he has read this!) .

* Something I didn't know was that the word berk was shortened from Berkeley, or Berkshire Hunt - which is rhyming slang for...well, never mind. I'm sure you get the idea.
Posted by Factor at 20:04