This blog has focused more on debate in the past couple of weeks rather than reports on birds. There is a reason for this - I haven't seen that many interesting ones during that time. And much of the reason for that is because of where I live.

Surrey is high on the list of counties with the least reports of scarce/rare birds in Britain each year because it is landlocked. We're very good for Great Grey Shrikes, the odd Pec Sandpiper, Common Cranes, Hoopoes and Lapland Buntings, and in recent years we've had a Ferruginous Duck, a Red-rumped Swallow and a Black Kite. But compared with other southern counties like Kent, Sussex, Essex and Hampshire, we don't get a lot.

Those counties, of course, are blessed with a coastline, and boy, does that help some. If you take a look at the RBA map from last week, the east coast was positively heaving with rare birds, but none were migrating towards the green belt of Surrey. 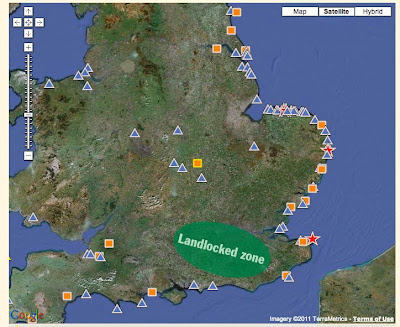 The bottom line is there is nothing to be done about it, apart from move.

So, today I thought I'd travel to where the birds are. I didn't go too far - work constraints put paid to that, as per usual - so I visited Cliff Pools, in the hope of connecting with the Isabelline Shrike that had been seen there for the past couple of days.

I set off ridiculously early (for me) and when I got there at 6.45am it was still dark. I wasn't the first to arrive, however. Andy White, who had come down from Luton, had arrived about 15 minutes earlier - he had the same idea about beating the M25 rush-hour traffic as I had.

We walked off in the direction of the fields where the bird had been last seen yesterday and almost immediately the signs weren't that good. The wind was bitingly cold and relentless. My eyes were streaming constantly, and the snot from my nose was whipped away as soon as it was exposed to the air.

The Shrike, if it was still in the area, would probably opt to find cover. In the end, however, both Andy and I were resigned to the inevitable conclusion. It had most likely buggered off.

I was so cold, I didn't feel like walking round the area to see what else was about and I had to leave at about 9.30am anyway. The one notable bird we did see at first light was a Merlin, sitting on what looked like a mole hill, before it flew off.

So 9.30am arrived and I left. Very. Disappointing.

Later in the afternoon, it was if I had been taken over by the Star Trek Voyager arch enemy, the Borg - whose chilling catchphrase - 'Resistance is futile' - couldn't have been more apt. I set off for Thursley Common. I couldn't help it. Annie and I had visited the nature reserve on Sunday in the hope of finding some Crossbills, a Hen Harrier that had been seen a couple of days earlier and perhaps the first sighting of a Great Grey Shrike - it was the right time for one to appear.

Needless to say, I found none of the above, although I heard a couple of Crossbills but couldn't locate where the sound was coming from. We came away empty handed - the highlight was a Sparrowhawk, a couple of Woodlark and some Siskins.

I needed a lift after this morning's let-down - a Great Grey Shrike had been discovered yesterday - but I didn't get it. To make matters worse, a couple of birders I bumped into happily told me they had seen the Shrike and plenty of Crossbills. I spent a couple of hours walking around the reserve and found nothing. So ended a very crap day.
Posted by Factor at 22:20