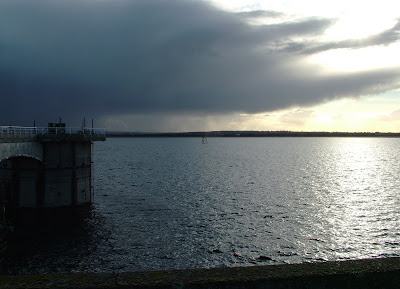 When the sighting of a Shorelark was first announced on Twitter by Johnny Allan yesterday, I didn't think I would get an opportunity to go to the Queen Elizabeth II Reservoir near Walton-On-Thames, but the bird was still there this morning and I managed to slip out this afternoon.

It had originally been seen along the north bank of the reservoir, which is close by the main entrance. What I hadn't realised as I arrived, however, was the bird hadn't been seen since 10.00am. I saw a number of birders walking along the path at the top heading west, so I followed. It was evident the Shorelark was not in the same place as before.

The guys ahead were about 300 yards ahead of me and they just kept on walking. And walking. And then the rain started to come down. Great. Either the bird had moved to the opposite end of the reservoir or no-one knew where it was.

Eventually, I met a birder walking towards me. The good news was he had relocated the Shorelark, which had moved to the far western end of the reservoir - it couldn't have been further away from the entrance if it tried.

After walking for more than a mile, I joined the other birders who had, at last, stopped walking and were peering through scopes.

The Shorelark (165) was feeding in a mossy area to the upper side of the concrete banking, with a few Pied Wagtails and Meadow Pipits for company. Very smart it was too, happily feeding for all it was worth. 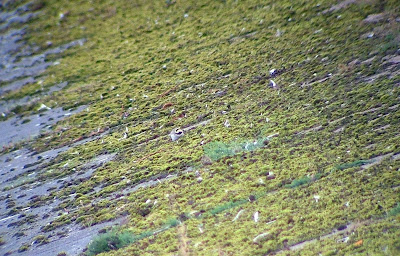 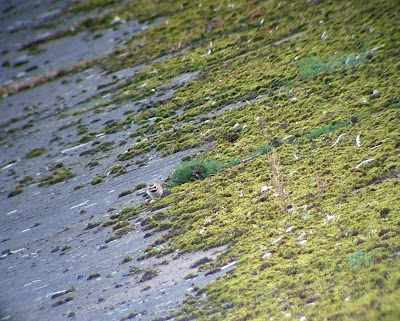 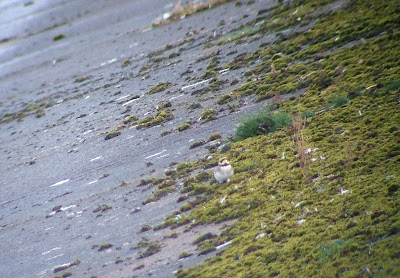 I was told by Bob Warden, who was also present, that Franko Mareovic believes this to be the first sighting of a Shorelark in Britain this autumn. Finding an inland Shorelark is unusual in itself, but what makes this bird all the more of a major find is that it is the first to be seen in Surrey since 1985.

I stayed as long as was prudent before heading home to continue the daily grind, so I didn't have time to take a detour to Newdigate to try and locate the Yellow-browed Warbler that has been seen each day since Saturday.

These warblers are notoriously difficult to see - very small and very active. They are constantly on the move. This one is mixed in with a flock of Long-tailed Tits and Goldcrests, and there is also the extra obstacle of a stiff wind and heavy showers to contend with. All these factors were going to make viewing even more difficult. It was going to be hard work, and I've got enough of that to keep me up at night as it is.