Today was the only guaranteed sunny day this week, and having had to abort Saturday's trip I took a chance and went down to Beaulieu and Calshot this morning.

I don't normally do twitching trips and it didn't start off that well. I got up later than I wanted to (we had had a bit of a late night) so didn't get out of the house until 6.50am. The traffic was horrendous. It took 45 minutes just to get on the M25, and then another hour to get on the M3. Terrible. Then there was an accident on the M3, so I didn't really get going for another ten miles. It was like wading uphill through treacle. 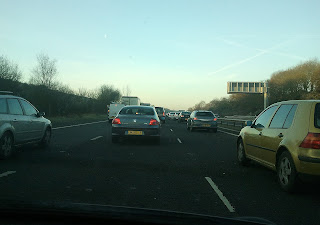 It meant I didn't get to the New Forest until 10.30am - more than three and a half hours after I had left the house - by which time I decided it was best to go to the Hawkhill inclosure to see the Dark-eyed Junco first, and then travel over to Calshot for the Sparrow which, I was led to believe, shows well at the front of the house on Calshot Close along a hedge from between 8.00-9.00am. After that it goes walkabout for a while before returning to the back garden later in the morning. 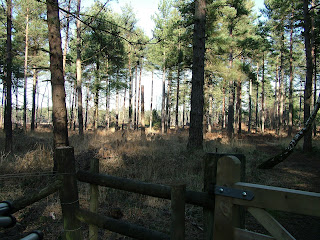 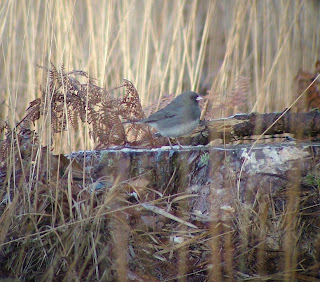 The Junco setting was great. I haven't been to the New Forest for some years and I had forgotten how beautiful a region of Britain it is. It wasn't long before the Black-eyed Junco appeared. A beautiful and striking bird, it liked to socialise with a flock of Chaffinches and Reed Buntings. It flew into the trees, fed on the ground, hopped onto tree stumps and a fallen pine tree. While watching it a group of six Crossbills were in conversation in the trees including a couple of handsome bright red males. 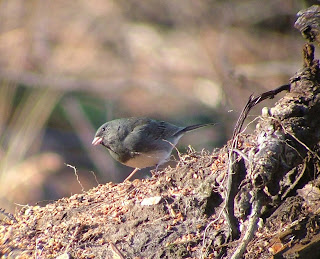 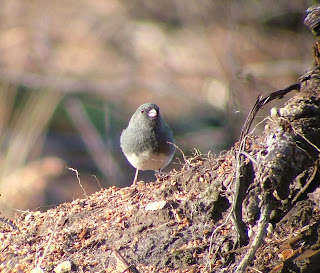 Eventually I had fantastic views of the Junco feeding on a tree stump just a few metres away. I couldn't have asked for more. It made a long journey worthwhile.

Because of the delays I could only stay for about 45 minutes before I left to head to Calshot. Only about 15 minutes down the road, I was soon walking to the house, where there seemed little activity. There was a bucket for donations to the local children's hospice, which I bunged a few quid into, and then I peered inside. 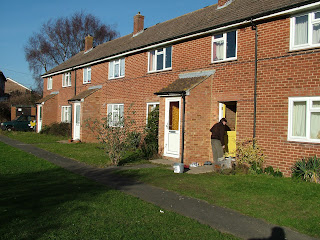 There were only a few people inside including the man who found the Sparrow and put the news out. Bruce Green, I discovered, is a very generous and knowledgeable birder who lives with his girlfriend in her house on the Close, and couldn't have been more helpful. 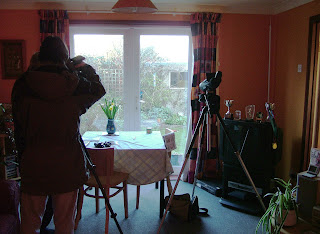 When I arrived the bird had just flown off, and to cut a long story short, I kept missing it. I was with Bruce down at the end of the row of houses watching another feeder when it reappeared in the back garden, but when I got back, a cat came in and it flew off again. It would be seen at one site when I would be at the other one. Highlight in the garden at this point was a female Reed Bunting feeding on the ground.

It was getting to the point where I thought I was going to dip it. Time was getting on and I was waiting during a period when the Sparrow tends to lie low for a few hours - between 11.30am and 2.00pm. It had all gone quiet. Bruce even suggested - to save some time - I should get my car, which was parked down at the seafront car park, while he'd stand outside if the bird reappeared. 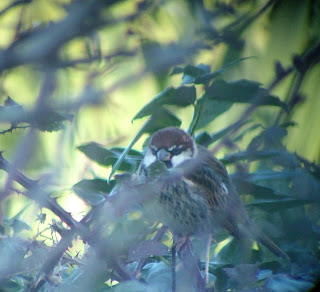 In the end, it all worked out fine, as after a wait of nearly two hours, I picked up the Spanish Sparrow as it flew into a honeysuckle plant at the back of the garden. It then dropped down onto the deck and fed close by for some time before flying back up into the bushes again. What a relief!

A smashing little bird that will probably hang around for some time, maybe even months or years, while it breeds with the local House Sparrows, producing plenty of hybrids. A satisfying end to a good day.
Posted by Factor at 23:38