The third and final day of my visit to Spurn arrived in a flash. A complete contrast to the previous two days – not a breath of wind and at some points during the morning it was gloriously sunny and warm.

Another visit to the Seawatch hide, this time for a spot of vis-migging. The light winds were perfect for it and I met up with Ian Whitehouse who was logging the numbers as they flew over during the morning.

Predominantly Meadow Pipits, more than 1,500, were logged during the first hour and a half with a total of 2,900 by the end of the morning. Mipits were packing the scrub and bushes by the observatory, plus there were plenty of Yellow Wagtails coming over, Grey Wagtails and the odd Whinchat. Highlight of the morning migration was a Merlin that flew over the observatory at about 7.15am.

Out at sea the most interesting sight was of an Arctic Skua pursuing a gull close in to the shoreline as it tried to force the gull to regurgitate its meal. 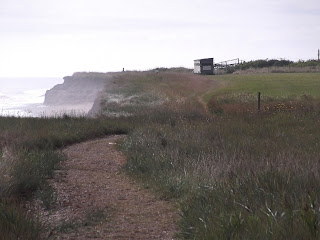 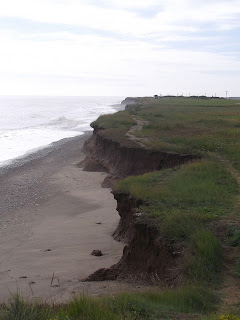 I went back to the Crown and Anchor for breakfast and then took a walk around the triangle. There was a lot more activity with the improved weather, nothing mind-blowingly rare poked its head out of the bushes, but it was still pleasant with Meadow Pipits everywhere, plus Reed Bunting, Common Whitethroat, Willow Warblers and Chiffchaff.

The tide had come in so the waders had dispersed, but there were at least 30 Shelduck on the Humber. The Red-backed Shrike was busy chasing insects over at Southfield Farm, where a couple of Corn Bunting had been seen in the willows – I couldn't locate them – while further up Easington Road a Spotted Flycatcher was perched on a telephone wire. 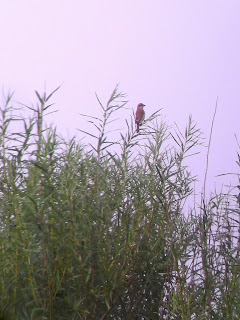 After the walk I headed off for Kilnsea Wetlands in the hope of seeing the three Little Stint that had been there on and off for a few days. Unfortunately I timed my visit while a Sparrowhawk was in the area and they had flown off. Plenty of waders were on the scrape, including a few Greenshank and also one of six Curlew Sandpiper had stuck around, as had a Ruff, to more than make up for the Stints' disappearance. On the way back to the car, having bumped into Matt, Sean and Steve, we spotted a Tree Sparrow up on the wires.

Time was getting on so I grasped the nettle and decided to walk down to Spurn Point and back. A trudge of about five miles all told. It wasn't too arduous as it turned out, but it was still disappointingly quiet on the migrant front. A huge number of waders were on the mudflats, including Golden and Grey Plover, Sanderling, Dunlin, Redshank and Knot.

Another Wheatear skipped down the track in front of me, but unlike a couple of weeks ago, there were no Wrynecks, Greenish Warbler or Subalpine Warbler, but I did see a large Warbler, which I hoped would turn out to be a Barred Warbler, in some scrub but before I could get my scope focused, it flew off across the spit and into another bush, never to be seen again.

On the way back from the lighthouse I saw four Whinchat, but further north Matt, Sean and Steve had located a Pied Flycatcher at the observatory. This was unbeknown to me as my mobile had run out of battery so I hadn't picked up the message – which was maybe just as well as I was still a good 30 minutes away.
When I eventually got back to the Obs I met up with the three guys and apart from Sean who had originally located it, they hadn't really been able to get a decent view of what was a very mobile Pied Fly. Reports had also come in that there had been another one seen with a Common Redstart further up the road along the footpath at the end of Beacon Lane in a hedge.

While the lads stuck around hunting for the Pied Fly at the Obs I headed off for Beacon Lane, where I soon picked up the female Common Redstart. I texted Matt and soon after the four of us were looking for a Flycatcher. The Redstart had disappeared into a hedge just as Sean approached.

There was little to see for a good 20 minutes, and locating the Pied Fly was also hindered by the fact that the bird had dropped down into the grounds of a house. Using binoculars while peering down the driveway was a bit awkward as the residence could clearly see us through their living room patio doors, so Sean and I thought it prudent to stop looking there as it was a bit of an intrusion. But then Matt suddenly saw a prime candidate appear briefly out of the hedge before diving back into the undergrowth again.

Steve then locked on to what he thought was a Chaffinch with its back to us high up on an overhead wire. A quick scan revealed it to be a female Pied Flycatcher! Absolutely brilliant. This has been a bogey bird of mine for some time so to actually get a decent view of one at the end of my last day at Spurn was fantastic.

It soon flew down into the trees and we lost sight of it. Sean then went off to look along the hedges next to the caravan park and his perserverance paid off as he managed to relocate it. The Pied Fly was very mobile and didn't keep still for long and after a few minutes it flew up the lane and out of sight again.

With that we went back to the Obs for what would be a final session of seawatching over a calm sea. Taking a well-earned rest in a chair by the hide we lazily gazed out to sea before I made plans to head back south to Surrey.

It proved worthwhile. While the usual Common Scoter, Little Gull, Kittiwake, Razorbill and Red-throated Divers drifted by Sean locked on to a Skua lazily flying north. After careful study he announced it to be a juvenile Pomarine Skua! What a result at the end of the day and a great seabird lifer for me. We also saw three probable Poms flying south before we finished.

And so ended my visit to a magnificent birdwatching site. I couldn't have wished for more, really. OK, no megas like the Great Snipe that turned up two days later along Beacon Lane to get the pulses racing, but still a great variety of birdlife and a wonderful birding experience. I met some great people and enjoyed excellent company during three days. I can't wait to go back.