Spurn. It is one of those places you here about all the time if you're into birding. It's a place where, given the right winds and time of year, rare birds just fall out of the sky and into your lap. Surrey it ain't.

For those who don't know the area, Spurn is a narrow sand spit on the East Yorkshire coast that curls round out into the North Sea and makes up the north bank of the mouth of the Humber Estuary. Due to its geographical prominence on the north-east coastline of Britain, it's hardly a surprise Spurn is famous for the fantastic array of birds that drop in there. It has got everything you could possibly want for a perfect birdwatching region.

Take August 25, 2013. Two weeks ago. Easterlies with high pressure over Scandanavia. Perfect conditions for a massive migration drop. God (not that he exists, but he does for this analogy) decided to tip out all his migrating birds over Spurn that day. It was verging on the ridiculous.

They landed all over the pace. Best of the lot was a Subalpine Warbler, but it was the numbers of other rare birds that made the jaw drop. Apart from a Barred Warbler, Red-breasted Flycatcher, three Red-backed Shrikes, two Common Rosefinches and 27, yes 27, Wrynecks – some of them very showy – littered the area.

Spurn, therefore, is a place to visit.

Time off work was arranged and three days at Spurn organised, including two nights at the Crown and Anchor in Kilnsea from Tuesday.

Coincidently, birding mates Matt Phelps, Sean Foote and Steven Penn had planned five days at Spurn at the same time I was going, so we arranged to meet up.

I set off on Tuesday morning at 4.30am, but before travelling on to Spurn I took a diversion at Sheffield and headed east towards Broomhead Reservoir, just south of Stackbridge.

In the forest to the south west of the reservoir a number of Two-barred Crossbill had been present for more than a week with a large flock of Common Crossbills. It was worth a try.

As soon as I arrived at 8am the 'jip-jip-jip' sound of Crossbills filled the air. I walked up with a local birder to a clearing where most people gather in the hope of spotting one of these rare Crossbills and waited.

The Crossbill flock was mobile and split up into groups. There were plenty of Siskin in amongst them and it was clearly going to be a needle in a haystack job, but at least I wasn't in any rush.

That, as it turned out, was just as well. Three hours into the vigil a flock of Crossbills flew overhead and landed in a dead tree 100 yards ahead of us. Unbelievably, perched at the very top was a male Two-barred Crossbill, with a juvenile perched just below it. A-bloody-mazing. Sheer luck, but I'll take it. 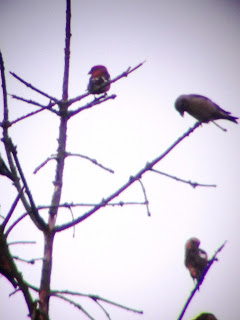 The flock stayed put for a couple of minutes before flying off.

On to Spurn. Two hours later at 1pm I walked into the Seawatch Hide, where Matt, Sean and Steve were already perched. The weather forecast had been very poor – gale-force winds and rain – good for seawatching. I sat next to an older bloke who obviously knew his stuff. His name was Steve Exley. Outside, sheltering from the wind and rain, were two more experienced birders. They turned out to be Ian Whitehouse and Steve Webb. More on Steve Exley and Ian Whitehouse during the next posts.

I have very little seawatching experience and would have been totally out of my depth if I had been on my own. In a group I was safe as houses. The wind, north to north-westerly, was fierce and pounding the hide while the angry sea was heaving and swelling ahead of us.

Steve Webb, an extremely unassuming and modest man is Britain's leading twitcher. No-one has seen more birds in Britain than this man – 555 in total (I hope that's right). I asked him what bird would feature high on his British wish list, and Little Shearwater was among them.

He was at Spurn, not to twitch, but simply to enjoy his birding. As Steve Exley told me a couple of days later, no matter how many rare birds Webb has on his list, and no matter that he might already had seen 20 or more Red-backed Shrikes, for example, he would always go out of his way to see another one.

The seawatch was amazing. Fortunately, out on the horizon were points of reference. Wind turbines are being built out in the North Sea a few of miles off-shore and the platforms were helpful as landmarks to pick up birds flying up and down the coast.

My visits to the coast are infrequent to say the least, and before this day I had only ever seen one Arctic Skua. After this particular afternoon session I saw at least 60 out of 162 Arctic Skua seen during the day cutting through the waves, plus 10 Great Skua, 50 Fulmar, 20 Gannet, three Common Scoter and one Red-throated Diver.

The big dip of the day was a Sabine's Gull, seen close up to the shore, but somehow I simply couldn't get on it. It happens to everyone, apparently.

As a starter to the main course, however, the first day had been a good one. A meal and a couple of pints of excellent Timothy Taylor Landlord at the Crown and Anchor with Matt, Sean and Steve ended a long day. Then it was off to bed. I reckon I was out for the count within a few minutes.
Posted by Factor at 02:40