September is the month when the autumn migration normally kicks off, but this year it started early.

A huge drop of birds on the east coast occurred during the August bank holiday weekend. Low pressure below the south east and high pressure over Scandavania produced a band of rain over eastern England and prominent north-easterly winds from the Baltic.

This combination brought a huge skip-full of migrants to the eastern coastal regions, with plenty of Pied Flycatchers, Redstarts and Whinchats, plus Greenish Warblers and a huge influx of Wrynecks.

Seeing any of these would have been great, but I couldn't get out until Bank Holiday Monday, when I set off for Seaford Head in the hope of a Pied Flycatcher or a Wryneck or two. To cut a boring story short, I didn't see either – three nice Whinchats, but little else.

Equally boring is the story of my car, a Peugeot 206 diesel that has cost me a small fortune to maintain and has tested my patience more than I care to remember. It did the same here, grinding to a halt as I entered Seaford on the way home. After about an hour I managed to get it started. It has a fuel-feed problem, has been in the garage more than once and, before you ask, is going in again this week.

Birding in late August wasn't a very successful pastime for me. Prior to dipping the Wryneck at Seaford, I missed out on the Long-billed Dowitcher at Pennington Marshes a couple of days earlier. The day was still a pleasant one with a pub lunch and walk around the New Forest – that despite the car breaking down again on the way home which meant any thoughts of going to look for the Hoopoe in the area were wiped out.

The other hiccup this past few weeks occurred on Twitter. Twitter is a fun social media tool, but if you don't pay attention, it can bite you. It can even get you sued if you don't understand libel laws. A comment which may have seemed harmless or perhaps a bit boisterous could easily be misconstrued as insulting or worse, defamatory, to the people receiving it.

I misunderstood a tweet sent via Jonathan Lethbridge regarding the Red-billed Tropicbird and the finder of the bird who sold his photo to Birdguides recently. Jono felt it was a error selling the image to a website where only subscribers could view it. The reason for this was because apart from this one person with the photo of the bird, all the other 40-plus birders who were at Pendeen that day missed it. He wasn't having a go at Birdguides but the bloke who owned the photo.

But I totally got my wires crossed and thought it was the fault of Birdguides, which was utterly stupid and so my fawning moral outrage at Birdguides buying the image was nonsensical – and Dominic Mitchell, whom I have the greatest respect for, was rightly irritated and faintly bewildered by my reaction. I still cringe when I think about it now as I can't really explain what I was thinking.

But at least that only got the one response and not the tirade of anger that befell one well-known and controversial birder for a reply he sent to Stephen Fry regarding his atheism. Not wanting to labour the point too much, suffice to say the comment made (he wondered whether not believing in God was the reason he got depressed a lot), which I'm certain wasn't intended to be insulting because I'm sure the sender is a big fan of the actor and QI host, was jaw-dropping. It was no surprise many people responded angrily, vehemently even, and you could almost sense how shocked he was by it. Dangerous stuff, tweeting.

Thankfully, after all the angst, disappointments and stress of recent weeks, it all came good yesterday morning with an obliging juvenile Red-backed Shrike at Rottingdean, which I successfully twitched. I had actually seen my first scarce bird in nearly a month, and what satisfying one it was too. 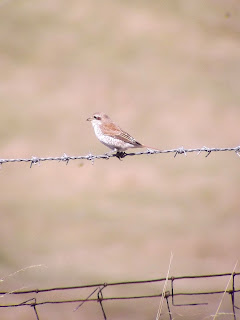 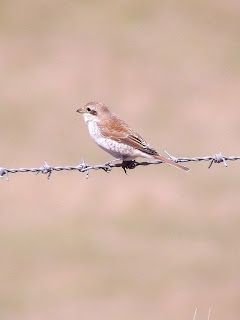 Feeding on insects and perching on a fence alongside Bazehill Road, I had my best views of a Red-backed Shrike. A pair of Dotterel had been seen on farm lane over the hill but I had Annie with me and didn't have time to spend looking for them.

Our next stop after lunch was Cissbury Ring, where I again failed dismally to connect with a Wryneck. I couldn't even found the right area where one had been seen in the early morning. It didn't matter too much. It had been a good walk, with a Raven being hassled by a pair of Kestrel being the highlight.

Another remarkable sighting happened driving home on the M23. A Hobby was chasing what looked like a Starling with the result both ended up flying down the motorway swerving in amongst the cars in front of us as the prey did its utmost to escape the raptor. Not something you see too often.
Posted by Factor at 10:46