A TWITCH TOO FAR

A recent blog post by Jonathan Lethbridge struck home this past week. Jonno has been rather tied up with work of late and only has a short period after sunrise to go out birding on his local patch. Last week he had to leave for London when a few minutes later an Osprey flew over the patch. His birding pals were happy to let him know he had been gripped off yet again.

He expressed his dismay and frustration on his blog, and similarly I went through similar emotions yesterday morning and expressed it on Twitter.

The story goes that birding is a relaxing pastime, when you use the time you can spare to forget about all the troubles and stresses in life. I wish I bought into that. Fifty per cent of the time that is true, I can lose myself in the moment, but for me at any rate, the remaining 50 per cent has recently caused me more stress and angst than work often does.

Easter Sunday was another one of those last-straw moments. But after a long chat about it with my very understanding wife Annie, I've finally worked out what the problem is.

This I will explain to anyone remotely interested a bit later on.

In the meantime, here's a brief update on what has been occupying my time recently.

On the way down to Margate two weeks ago we took a slight diversion off the M20 to go and see the long-staying Hoopoe at Snodland. 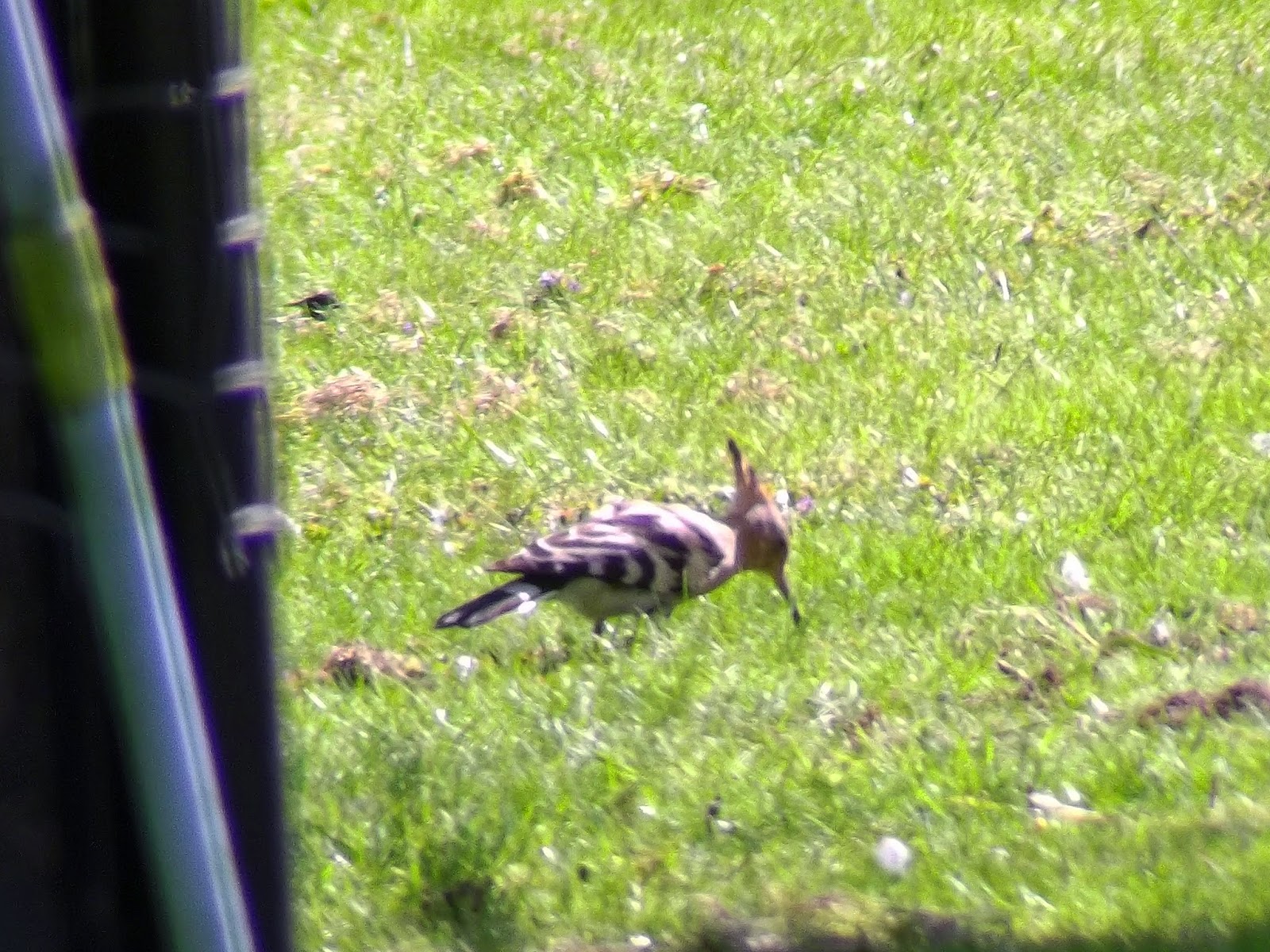 Access to view this surprising wintering bird wasn't easy. You had to climb up a steep bank and hold on to a fence as you tried to balance your scope and grab a view of the Hoopoe feeding in the private garden at the end of Sandy Lane. With only really a vantage point for one person at a time, there was a bit of a queue.
Nice bird. Next.

Work was all-consuming this past week, and the news that a male Ring Ouzel had been discovered on Staines Moor by Kev Duncan early on Friday didn't feel me with the glee it should have.

I was working at the Star when I saw the news, and knowing I wouldn't get the chance to go and see it until Sunday at the earliest, I spent the next 24 hours scanning Twitter for updates to make sure it was still around.

To add to the stress, a Grasshopper Warbler had also revealed itself on the Moor, but I had more confidence I would find that than the Ring Ouzel.

What didn't help was this Ouzel was mobile. But that was more down to the fact so many people were chasing after it around the Moor. Ring Ouzels are extremely shy birds who don't take kindly to the company of human beings, or birders with cameras for that matter, and it doesn't take much to force them to fly off.

Which is exactly what this one did presumably on Saturday night. It must have held the view this Staines Moor place was unsafe and it was time to head off.

So, on a miserable, cold and breezy Sunday morning I found neither Gropper or Ring Ouzel, and utterly soul-destroying it was too. Five singing Lesser Whitethroat had been the highlight.

I was extremely pissed off and left in a huff. I'd only had about four hours sleep when I'd dragged my carcass out of bed at 5.30am and following the trudge to the Moor, not to find either bird was more than I could take.

My listing this year has been very hit and miss. I just can't seem to buy any luck, apart from, obviously, one absolute stonker a couple of weeks ago when the male Pied Flycatcher paid my local patch a visit.

That bird has kept me going ever since. What the Pied Fly also brought home to me was how so many decent birds will go unnoticed if there aren't birding feet on the ground looking for them. If Graham James hadn't been out that morning and hadn't gone looking round the Mercer's Country Park car park, that Pied Fly would have remained anonymous.

Back at Staines Moor, I very nearly just got in the car and drove home. Instead, I headed to Staines Reservoir, which was hard going in the wind and intermittent rain.

I locked on two Oystercatchers almost immediately on the north basin, and then the Great Northern Diver showed quite close in on the south basin, with its breeding plumage starting to appear.
A Whimbrel stood on the edge on the north basin by the causeway, while at least two Arctic Tern were feeding along with many Common Terns also on the north basin. After a half-hour interlude back at the car while lightning fired off nearby (the causeway is not a good place to be at such times) I stayed until midday before heading home in the pouring rain.

Yesterday I went to Staines Reservoir again in the morning, where a Black Tern was feeding on the south basin, which was a still as a millpond. As I left I got a good view of this smashing bird perched on the gantry over the KGVI reservoir.

A Little Tern had been seen by one observer very early on, and two Bar-tailed Godwits flew off a few minutes before I arrived – so very typical.

A Whimbrel flew over the causeway later in the morning. I spent some time talking to birding mates Dave Baker and Kev Duncan before heading home. I was due to visit my dad in hospital in Margate in the afternoon.

My wife says when I have a poor morning's birding, it affects the rest of our day at home. I wasn't really aware it was that bad, but I knew this attitude couldn't go on.

This is when we sat down to discuss what to do about it. It was cathartic, which seemed appropriate on this particular day.

The problem is this: Surrey listing and my competitive nature dictate how I go birding. Why? Because I have to admit to having an addictive personality. Whatever I've taken an interest in during my life, it has always threatened to take me over, whether it's birding, horse racing, stock car racing, Formula 1, Saxon history. I don't do anything by halves.

This year the Surrey Birders website species league table is more competitive than ever, and while in previous years I've always been in the running and finish in the top three – I could have done even better had I not had to take two months away from birding at the end of last year – this year I have been like Manchester United and David Moyes. Just not at the races at all. And stupidly this has really begun to get to me.

This is not birding, this is just listing to prove a point. And every time I was going out I could feel the stress building – literally knots in the stomach and panic – when it became apparent I wasn't going to see the bird I had come out to see. A failed twitch had become all-consuming. A horrible feeling.

So, add in the mix my opportunities being infrequent, I tend to twitch with urgency rather than take a trip out somewhere, like Steve Gales does, and enjoy the moment for what it is. If I can learn to do that more, I will enjoy it more. Steve certainly does, and as a result he sees more good birds than I ever do.

So that is the plan. Extract my head out of the Surrey listing game and take things as they come. I really hope I manage it.

I started this plan off before going to visit my dad. Desperate for some sea air before sitting in a stuffy hospital ward for a few hours, Annie and I walked along the beach at Foreland Point and Botany Bay at Cliftonville, which is a stone's throw away from my parent's house. It is such a beautiful spot. A happy place.

The sun was out, and it was a lovely walk – really peaceful. I took my scope just in case I saw something interesting, and low and behold, I did. 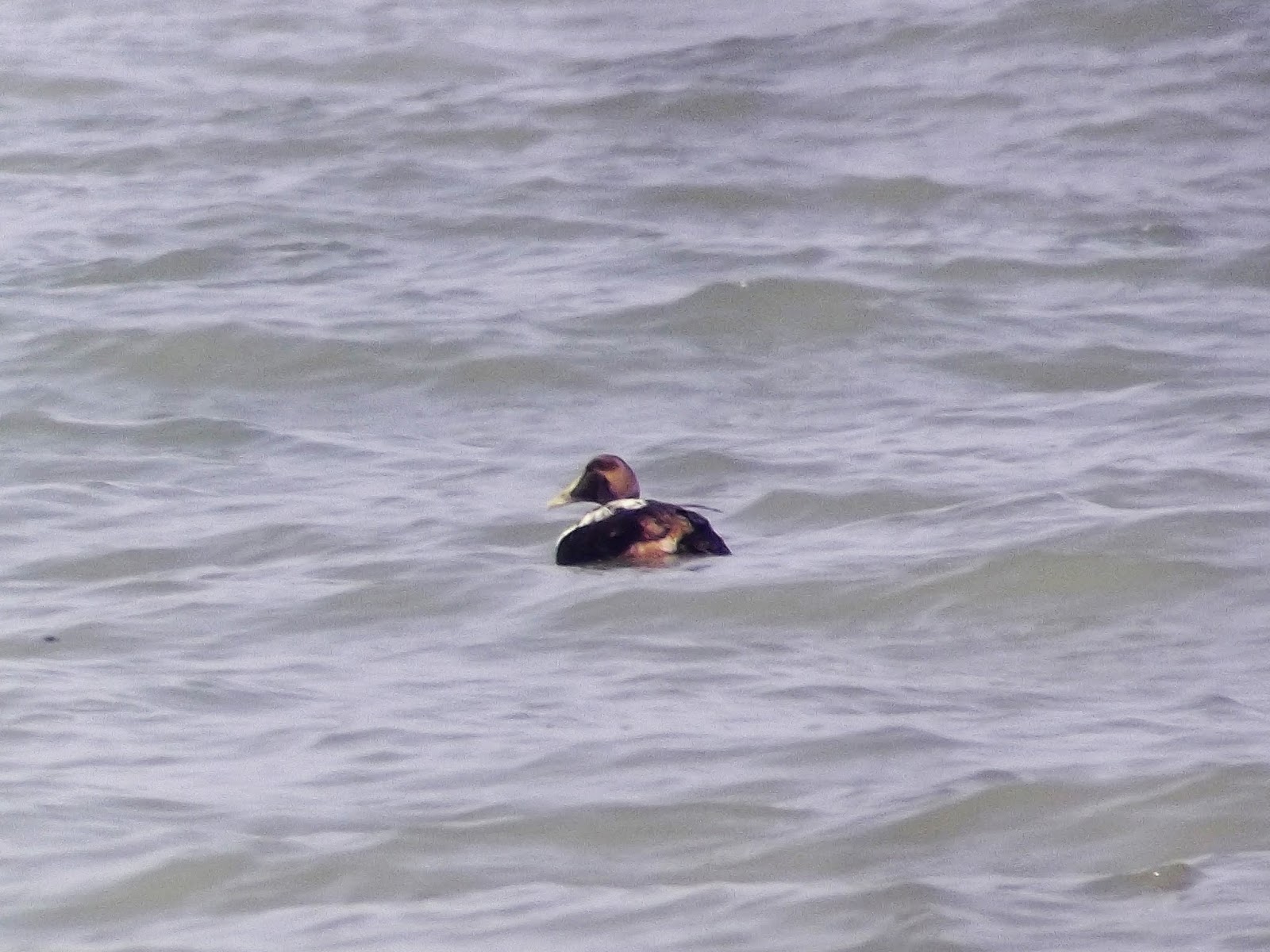 Out on the sea dozing among a few gulls close in to the beach, was a male Eider in eclipse – something I'd never seen before.

Further out four Gannet flew by, plus on the horizon what looked like a Sandwich Tern. Above us a number of Fulmar swept by as up in the chalk cliffs breeding pairs bickered.

Back at the car a Pipit flew up, and parachuted back down into the undergrowth. It was Tree Pipit, presumably it had arrived that morning having made landfall.

In the space of 45 minutes I'd seen quite a bit and can honestly say I enjoyed it more than any other part of my birding weekend. I hope I have learned something.

*FOOTNOTE
A quick update on my dad, who is actually improving compared to more than a week ago.

It has been decided he isn't going to have surgery to remove his subdural haematoma. The specialists at Kings basically said that from the scans they've seen, the haematoma is not causing the confusion or hallunications and that we should look elsewhere for an answer. At this stage they didn't think surgery was necessary.

Good news, I guess, though I'm not absolutely sure. At one stage we were concerned that it could be dementia, but now – to my mind at least – it looks more like the bladder infection symptons are continuing to cause the problem.

It's now a case of wait and see. But the next task is to find somewhere for him next week to recuperate before eventually, and hopefully, he goes home.
Posted by Factor at 13:59