It's amazing how taking a step back can be rejuvenating. I've taken it pretty easy this past week. Not leaping in the car to go find a Ring Ouzel has had its benefits.

I've wandered over to the patch now and again, not expecting much but managed to pop out for half an hour to see an early male Whinchat at Mercer's Farm, found by Gordon Hay on Wednesday morning. It was flitting around, perching perched on a fence near to where the Little Owl resides in an oak by the old horse paddocks, which are now overgrown. 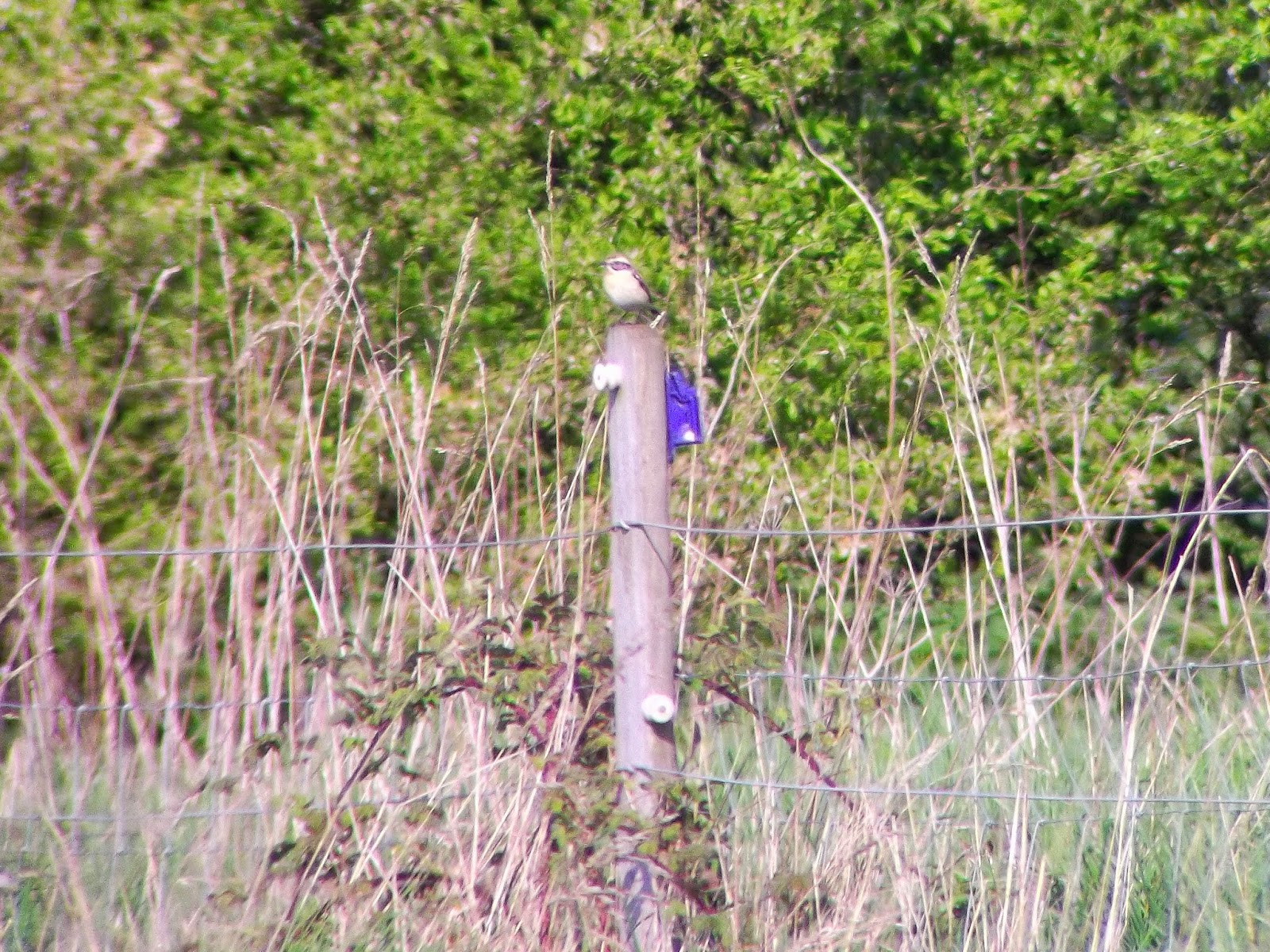 It was only the third spring sighting of a Whinchat seen on the site so it was another good find on the Holmethorpe patch. A short walk up the cycle path was a Garden Warbler merrily singing its head off, so a nice distraction  before heading off to London an hour later.

After that my next morning out was on Sunday. after plenty of rain overnight and showers continuing through the morning I set off for Staines Reservoir. I got there quite late, just after 10am, and discovered I'd just missed a Bar-tailed Godwit that had been asleep and then had been preening itself on the west bank of the north basin before flying off north. That's the second Barwit in a row I've missed, but I'm not bothered by it. Really.

I met local birder Chris Hazell from Bucks and two other birders, one of whom was in particular very knowledgeable and pointed out an adult Little Gull on the south basin. What was interesting was to compare the size of the Little Gull to that of a Black-headed Gull close by. They really are very small gulls. 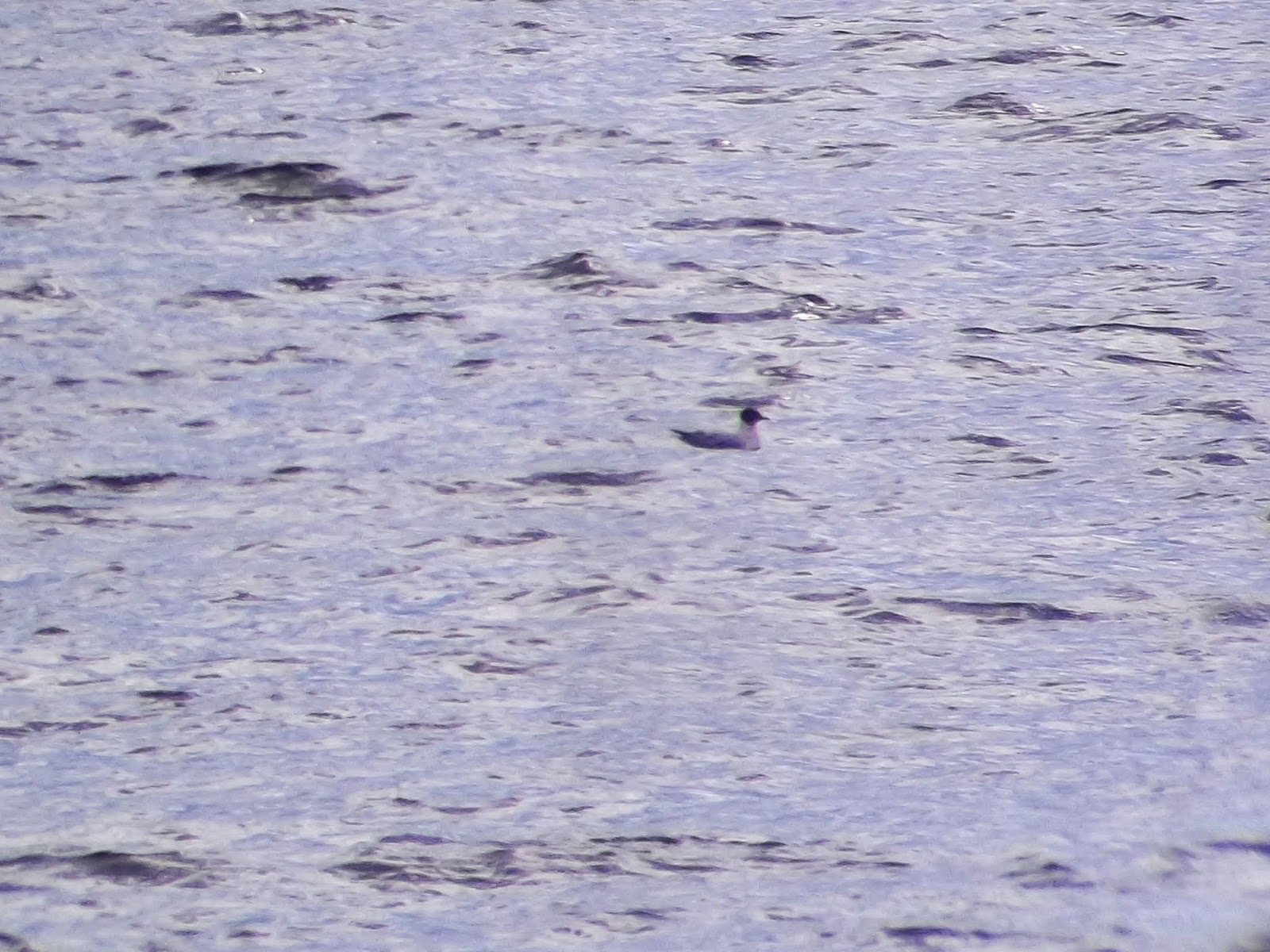 The knowledgeable bloke turned out to be Tim Stowe, Director of International Operations for the RSPB. Nice chap, who also spotted 15 Common Swift flying across the north basin before he left.

There were plenty of Common Tern feeding on the north basin with at least 10 Arctic Tern with them. The Black Tern was still present, as was the Great Northern Diver, who was a distant spot at the south-eastern end of the south basin.
Chris and I walked up to the east end of the causeway to get a better view of the Terns. While there a House Martin flew over as did a pair of Yellow Wagtail. On the south basin a Black-necked Grebe was showing well in summer plumage.

It was all very laid back. A nice morning birding.

And then it happened.

While I was scanning the Terns in the hope of spotting a Little or Sandwich Tern when Chris attracted my attention. A largish duck was trying to land on the south basin but a flurry of activity saw it fly up, chased by four Pochards.

A duck being mobbed by ducks? What's that about?

A look through the bins as these five ducks wisted and turned above the south basin revealed a large black and white duck. My first thought was some hybrid or other but as it hurtled off north it was clear what it was.

Well, blow me, if it wasn't an Eider – it was one of those situations when you think to yourself "am I really seeing this?" It was an immature male and a county first for me.

It is strange how things like this happen out of nowhere. If we'd been both studying the Terns we wouldn't have noticed it, as the event took all of half a minute from start to finish.

It was midday and time to think about heading home. I wasn't going to top that sighting even if I stayed all afternoon. On the walk back, Chris, who had left just before me was watching something on the south basin.

The Great Northern Diver was right up close to the edge of the causeway. It was really striking to see close up as it develops its summer plumage, although it didn't appear for long before it dived out of sight and then re-appeared about 100 yards away further up the causeway. 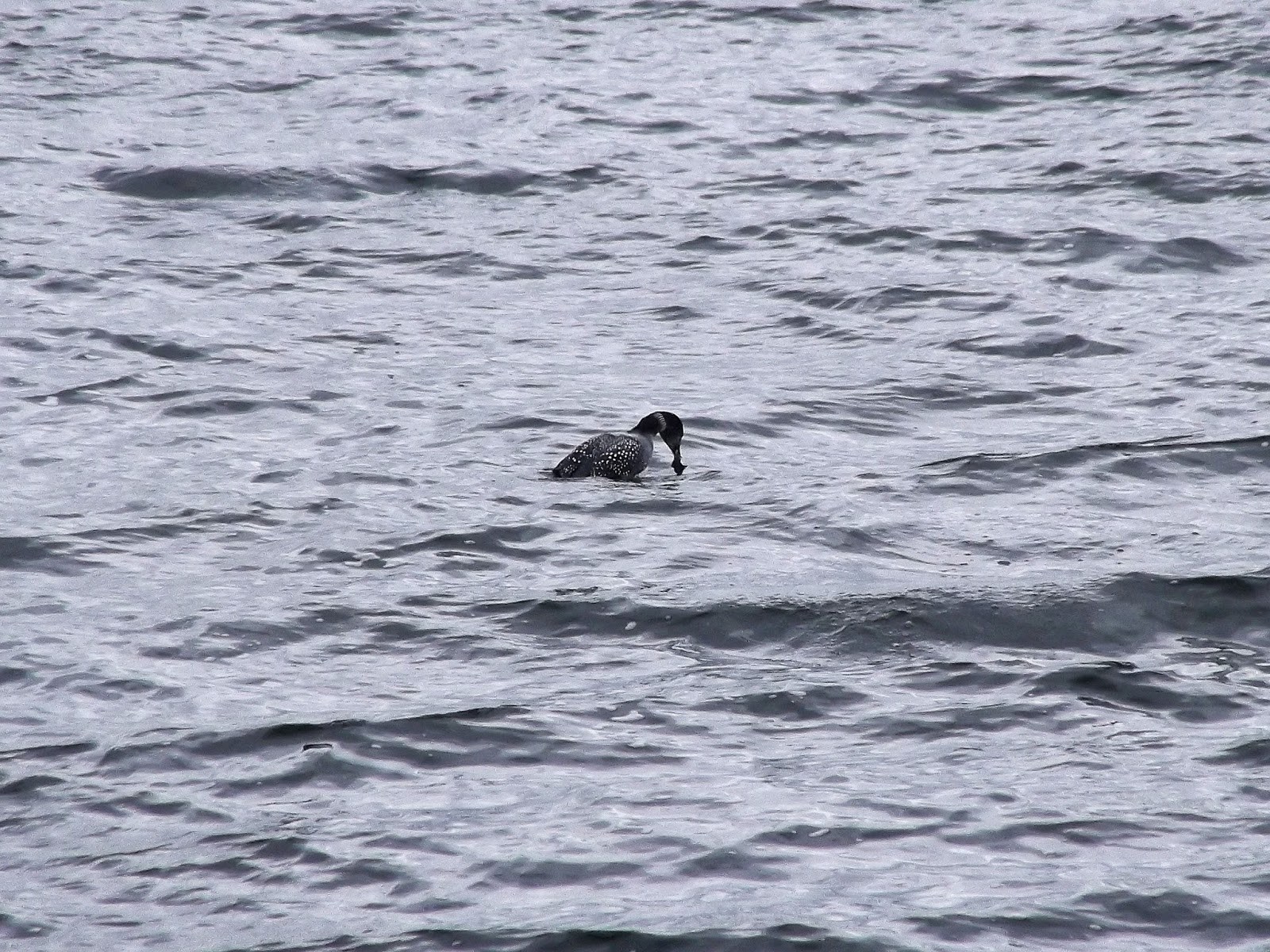 An excellent way to end a very rewarding two hours.
Posted by Factor at 22:25