GIVEN A BOOST BY A PRIZE PATCH PIED FLYCATCHER

For those who follow the blog on and off, it won't have gone unnoticed that I have been at my wits end trying to juggle my dad's illness, my mum's social services requirements, and a shed-load of freelance work that can't wait until the next day.

To make matters worse, my dad's situation is actually more serious than originally thought. In the last post I explained how confused he has been due to the urine infection, but didn't mention the fall he had on one of his many visits to A&E to sort him out.

He'd been at the Queen Mother Queen Elizabeth Hospital in Margate for seven hours one evening two weeks ago while he had blood tests done. Once he'd been allowed to go home after having another catheter inserted, he took a bad fall in the hospital car park, banging his head. He had to go straight back in to have stitches, and once that was done he left, with my mum in tow, at 6am in the morning.

What the A&E department failed to do, however, was to give him a CT scan to check his head. Two weeks later the hospital were certain two days ago he was physically fit to go home, but I insisted he still wasn't right. He was still hallucinating and also hadn't recognised me when I arrived to see him.

His bloods and all the tests were telling them he was on the mend, but just to check they gave him a CT scan. It was then they discovered the problem. He has a subdural haematoma – a blood clot between his skull and his brain. This was clearly as a result of the fall he had two weeks earlier and the reason why he is still confused.

It is, so my doctor brother-in-law Alan says, unfortunately quite common with the elderly and he was surprised the hospital hadn't scanned his head sooner.

So, he is now waiting for a bed to be free at Kings College Hospital, where he will be sent to have an operation to remove the clot. This will be done under local anaesthetic using a drill. Not something to look forward to and for an 87-year-old, this won't be a walk in the park by any means. All fingers are crossed. He's in good spirits considering and has had loads of visitors every day this week, which is great.

It's hard to concentrate on work at times like this, but needs must. And also, although I feel guilty about it, I also need to take some time away from it all to recharge and to have a bit of relaxation, even for just a couple of hours. I'll need to be on the ball in the coming weeks, that's for sure.

The opportunity for a distraction turned up out of the blue this morning. I got up a bit later than usual and had a quick look at Twitter to see if any migrating birds were making the local headlines.

Not only a Pied Flycatcher, but a male Pied Flycatcher on my local patch, just a five-minute drive from my house. All other work plans went out of the window and within 20 minutes I was parking the car.

It transpired it was local patch guru Graham James, still at the scene, who has found this brilliant patch sighting at 7.30 this morning. At the time he had only 12 pence-worth of phone time left, just enough to text Gordon Hay, who then put out the news.

Graham hadn't seen the bird for a good hour which wasn't good news, but we scoured the area. We were joined by John Benham a bit later, but still no sign. We split up to cover more ground and it was just after 9.30am that I relocated the Pied Flycatcher high up amongst the cherry tree blossom. Bloody marvellous.

A handsome male Pied Fly. The first male recorded on the patch and only the third patch Pied Fly ever. The last one was seen on the 1990s, so this was a true patch mega. It was also the first Pied Flycatcher I'd seen in Surrey.

It was mobile and we kept losing sight it, but Gordon Hay joined us before 10.30 and found it again. Probably because so many birders were chasing after it, it eventually flew over the road into some trees by the verge where it stayed as we left.

I'd only got a poor photo of it and thought that would be it for the day.

It was when I went over to Water Colour Lagoons in the evening, where I saw about 15 Sand Martin and a couple of Swallows feeding above the lagoons, plus a Little Ringed Plover that I came across a couple of Crawley birders who had just been to the Mercers car park and seen the Flycatcher again. 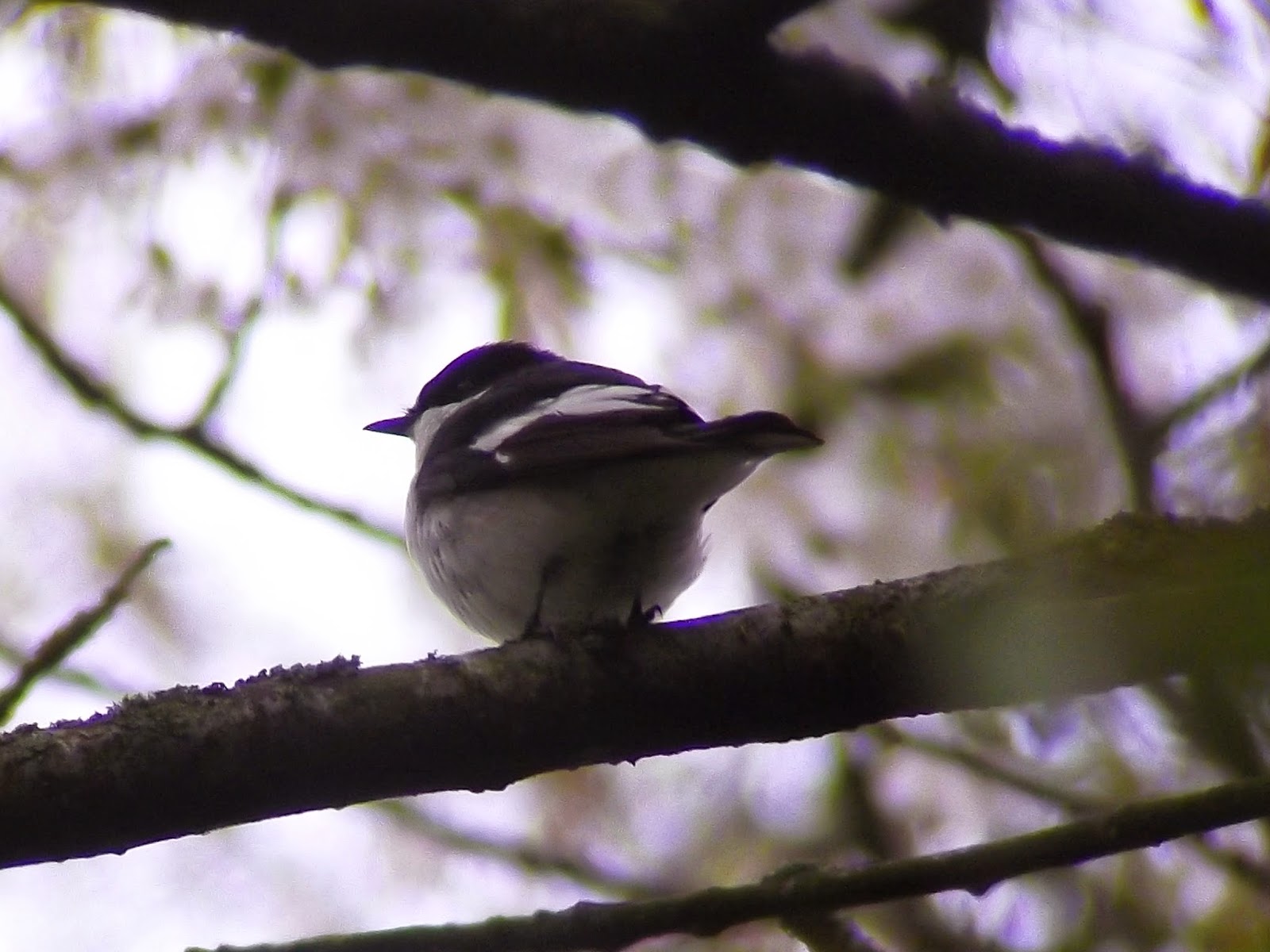 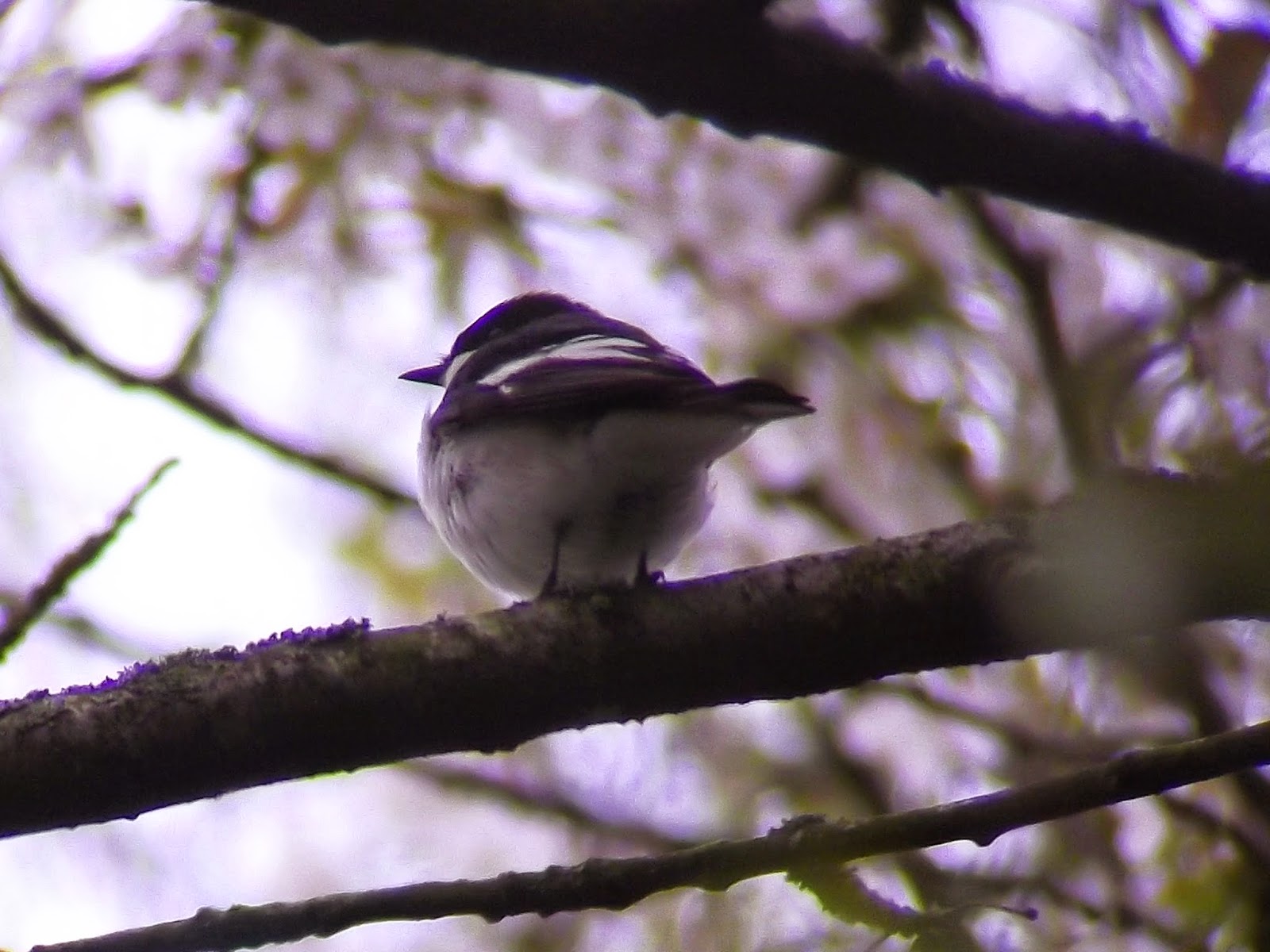 I couldn't resist another go and at 6.45pm I found the Pied Flycatcher again in amongst the blossom. It was one of the best moments of the year for me so far as I managed to get decent digiscope photos of a fantastic bird as it was perched on a branch for more than five minutes.

What a bizarre old business birding can be. I'd pretty much written off much of the spring and within 24 hours I was watching one of the best birds I'm likely to see on the local patch this year. All very strange.
Posted by Factor at 23:16