With little happening on the patch (apart from missing out on a Spotted Flycatcher on Sunday while I was at the Heavy Horse and Country Show at East Bysshe Showground in Blindley Heath) I took Monday morning off and went on my second twitch in a couple of weeks.

Having said recently how I'm not particular keen on twitching at the moment, I will make exceptions at this time of year. For one thing there are plenty of very interesting birds dotted around the country that are well worth going to see, and secondly, when a patch goes a bit quiet, patch watching can become a bit soul-destroying.

An example of this came about when reading Lee Dingain's Almost Birding blog recently. Lee is one of the most dedicated patch watchers in Surrey and a multiple Rambler Award winner. But even he can be driven to distraction by his beloved Staines Moor at times.

Part of Lee's angst is due to the fact he only garners real birding pleasure when he discovers new species himself on the Moor. For example, it doesn't matter whether he ends up seeing a couple of Bar-tailed Godwits on the River Colne (as he did recently) if someone else saw them first.

It's a self-inflicted hindrance, so it is no wonder Lee has felt like throwing in the towel on occasions.

I love my local patch and would much prefer to discover the 131 species that have currently been seen at Holmethorpe this year, but I know I can only realistically expect to discover a handful. I'm more than happy with that, and I'm also happy to mix and match now and again.

If things get a bit repetitive, I'll travel somewhere different. I've been to Dungeness and Portland Bill in recent weeks, and both visits were really enjoyable.

So on Monday I headed to Little Paxton and the Paxton Pits Nature Reserve, home for more than a week to a Great Reed Warbler.

It was a bright sunny day, and after a 15 minute walk to the reedbed I could immediately hear the Great Reed Warbler and its slightly grating chatter, much deeper and louder than our regular Reed Warbler song.
Another birder was already peering through his scope at it and he gave me the opportunity to have my first view of the Great Reed Warbler before I had even set up my scope.

I stayed for a good hour and a half, with a handful of birders coming and going during that time – some local, some from further afield. I enjoyed the visit immensely, as while the Great Reed Warbler sang for almost for the entire hour and a half, it was interspersed with Nightingale song nearby and a vocal Cetti's Warbler.

Views were good when the rare migrant climbed higher up the reeds, though difficult to photograph (as can be seen from the rubbish images above).

Paxton Pits really is an excellent reserve. Well managed, with a varied habitat – not too dissimilar to Holmethorpe, but with plenty of Nightingale, one of which was extremely showy, dropping down to within 10 feet to feed on the ground, but I was unable to take a photo before it flew back into the bushes. 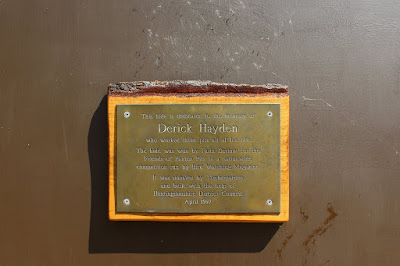 A Cuckoo sang nearby, Common Tern were plentiful, as were the common migrants. The visitors centre was very good, with a cafe and decent loos. I would recommend a visit.
Next up was a visit on Tuesday to Margate to see my mum. Foreness Point is only about 400 yards from her bungalow, and while I only get to take an hour at best when I'm down, it often ends up worthwhile.

Predictably, down the road at Sandwich Bay, a Bee-eater was seen flying north earlier in the morning, as well as a Montagu's Harrier over Worth Marshes. As is often the case with bird sightings, you have to be in the right place at the right time. Luck features a lot.

There are always Fulmar flying around the cliffs, and other interesting birds often drop in. It was actually pretty quiet at the Point, both out at sea as well as on land, but as often happens, a bird turns up when you least expect it. 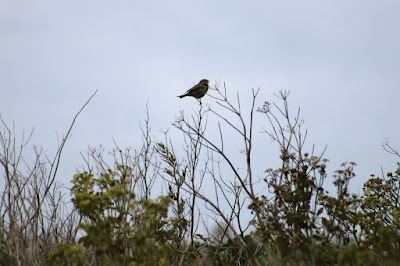 I heard it's unmistakable song first of all. It was a Corn Bunting. I've never seen one here before, it was certainly out of place in Margate, but a welcome sight nonetheless.